A woman just barely keeping her head above water finds herself looked down upon by the denizens of her small town with life taking an unexpected turn when a biker shows up and decides to become her protector.  Keep reading to get a tempting taste of Burning Hot Rumors by Debra Kayn, then add this sexy and suspenseful tale to your bookshelf.  In honor of this second installment in the Choices: Tarkio MC series make sure to fill out the form below for the chance to win a $100 Amazon GC too! 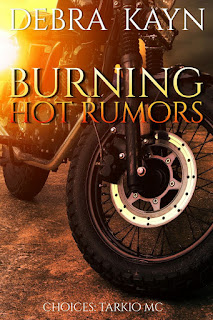 For Callie Moore, it’s a day-to-day struggle to live in a town where everyone thinks she’s the worst person on earth— thanks to rumors. Divorced, living with her ailing dad, and the scars of finding her ex-husband in bed with not one, but two, of her friends, have her on a downward spiral.
Her immediate problems outweigh her concern over the rough and gruff biker her dad hires to help out at the gas station. No matter how attractive she finds Kent, he’s only another person she needs to defend herself against.
A drifter his whole life, Kent Calder can live anywhere as long as he has his motorcycle and a road in front of him.
Stopping at Moore’s Gas Station was only a pit stop on a road trip with no destination. A way to put a few dollars in his pocket. He has no plans to stay in Missoula, where drama and rudeness from the locals is a way of life.
Until the talk centers around Callie, and he sees what the lies are doing to her.
If she can’t stand up for herself, he’ll fight for her. But as soon as he stomps out one fire, another one pops up.
Through attraction, heartache, devastation, and time, the flames between Kent and Callie only grow hotter.
EXCERPT:

He turned and looked out on the floor. It took him longer to find her because she was hidden behind the biker talking to her. He craned his neck, caught her smiling at the other man, and tensed.
Stalking across the floor, he shoved people out of his way and stepped between her and the Tarkio member.
"Man, you better step away," said the biker.
"Get lost." He grabbed Callie's upper arm and pulled her away.
"Wh…?" Callie stumbled beside him. "Who?”
He ignored her mumblings and pushed out the front door. Turning her to face him, he gazed up and down her body to make sure she was okay. Callie's mouth opened and shut numerous times, and she blinked rapidly. "Kent?”
"Nice of you to recognize me," he said.
"I thought I'd never see you again." She planted her hands on his chest, but her body weaved side to side, trying to gain her balance.
He caught her other arm and held her steady in front of him. That's when he noticed the way her eyes remained unfocused on him.
"What the hell have you been doing?" He stroked her hair out of her eyes.
Gut punched, he remembered the excitement, the passion, the energy swirling around her the night she'd finally let loose and egged her ex-husband's truck. He'd walked away from her that night as if he'd gotten his first taste of the real Callie, and his addiction to her had started.
How many other men inside the clubhouse were standing in the same position he was, half in love, fantasizing about being with a woman who had no understanding that fire ran through her veins? How many other men wanted to be the one who helped her set herself on fire?
Callie crumbling, diving for his chest. He wrapped his arms around her, keeping her on her feet. A fire brought him back to her.
"I lost everything," she mumbled against the front of his jacket.
"I know." He rubbed her back, happy to hold her. "Fuck, I missed you, honey.”
She raised her head and frowned. "You left.”
"I needed to go." He kissed her forehead. "But I'm back.”
She pushed against him. "Why?”
"I want to help—“
"No." She stepped away from him, almost stumbling. "You can't just invade my life and then leave again. You're just listening to the rumors. Everyone listens to Josh.”
"I'm not—“
"You listened." She tapped her head, slurring her words. "That's why you left. Now you're listening to him again. Just go. Leave me alone.”
She grabbed for the handle. He planted his hand on the door, stopping her.
"I'm not listening to anyone but you, Callie." 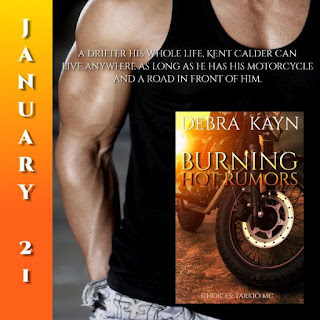 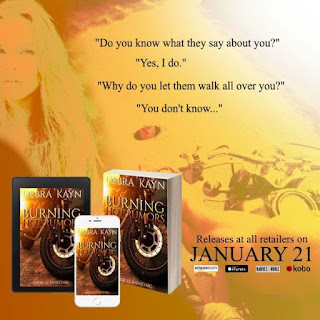 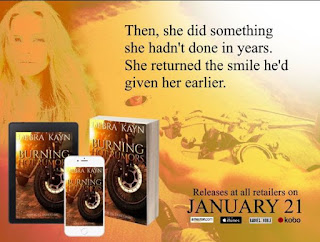 Debra Kayn is published by Grand Central Publishing, Simon & Schuster Publishing, Carina Press – Harlequin Enterprises Limited, and repped by agent, Stephany Evans of FinePrint Literary Management.
Believing everyone deserves to love and be loved, she takes the most unlikely characters and turns them into heroes and heroines.
She lives with her family in the Bitterroot Mountains of beautiful North Idaho where she enjoys the outdoors, the four seasons, and the wild animals that gather in her yard.