A single mom finds herself drawn to the rockstar next door, a drummer with a dark past that has him longing for revenge, in this emotionally intense romance of opposites attracting.  Keep reading to get a tempting taste of Kiss the Stars by A.L. Jackson, then start counting down the days until this book hits the shelves on March 5th!  In honor of this first installment in a series that’s a spin-off of the Bleeding Stars series fill out the form below for the chance to win a complete signed set of the books in that series too! 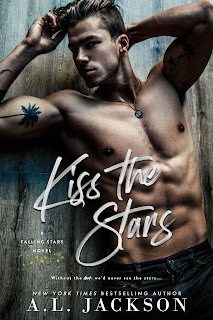 A Falling Stars STAND-ALONE NOVEL from NYT & USA Today Bestselling Author, A.L. Jackson...
A single mother.
An up-and-coming drummer with a sordid past.
Their paths never should have crossed.
But when a senseless crime rocks Mia West’s entire world, she agrees to spend the summer hiding out at her rock-star brother’s mansion in Savannah until the storm blows over.
What she never expected was the gorgeous, brooding drummer living in the guest house.
His darkness a lure.
His gaze a trap.
She knows better than to go after what will hurt her most.
Leif Godwin has two focuses in his life: his band, Carolina George, and seeking retribution for what was stolen from him.
Mia was never supposed to be a part of the equation.
Her eyes an appeal.
Her body a temptation.
Touching her is nothing but a sin.
But will loving her destroy them all... 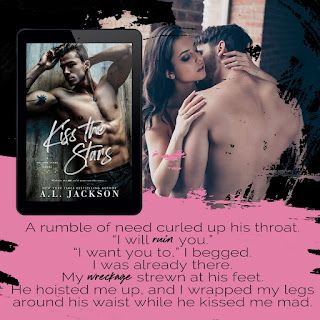 VOTE FOR KISS THE STARS AS THE MOST ANTICIPATED BOOK here.

A.L. Jackson is the New York Times & USA Today Bestselling author of contemporary romance. She writes emotional, sexy, heart-filled stories about boys who usually like to be a little bit bad.
Her bestselling series include THE REGRET SERIES, CLOSER TO YOU, BLEEDING STARS, FIGHT FOR ME, and CONFESSIONS OF THE HEART novels. Watch out for her upcoming stand-alone, KISS THE STARS, releasing March 5th.
If she’s not writing, you can find her hanging out by the pool with her family, sipping cocktails with her friends, or of course with her nose buried in a book.
Be sure not to miss new releases and sales from A.L. Jackson - Sign up to receive her newsletter HERE or text “aljackson” to 33222 to receive short but sweet updates on all the important news.