A rockstar about to implode finds a connection to an artist devoted to her art (but with a dangerous past looking for her) in this emotionally intense romance.  Keep reading to get a tempting taste of Deliverance by N.N. Britt, along with getting my impressions of it, then add this second installment in the Deviant Hearts series to your bookshelf! 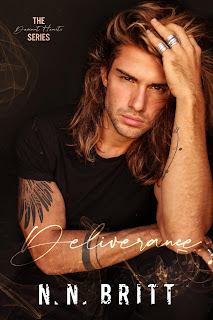 A famous drummer with time and money to burn. A young artist on the cusp of international stardom. A danger lurking in the shadows.
Powerhouse rocker Zander Shaw is The Deviant’s last single man standing. With the band on hiatus, he’s been globe-trotting and spending his hard-earned money on women, extreme sports, and partying. Los Angeles is only supposed to be a pit stop—track drums for infamous metalcore outfit Bleeding Faith and move on. Until a beautiful, mysterious woman gives him a good reason to stick around.
Up-and-coming artist Drew Kadence made L.A. her home a few years ago. Almost no one knows she’s on the run from a violent past. But when handsome drummer Zander enters her life and rattles all her defenses, she can’t deny the fact that their chemistry is through the roof. Problem is, she’s not sure she’s ready to dive into a relationship. Especially since her divorce isn’t finalized yet.
The more Drew gets to know Zander, the more she’s attracted to him. But Zander’s simple gig unravels his old demons, and Drew’s demons are gaining on her. Now they both have to face their fears.
Will love give them the strength to do it together or will they each have to do it alone? 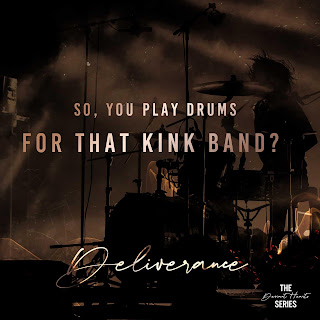 MY IMPRESSIONS OF THIS BOOK:
As a fan of rockstar romances I was immediately drawn to the premise of this story and its premise of overcoming the past to make a future.  From the first page to the last it's a story that pulled at my heartstrings while enjoying the slow-burn of their relationship as these two emotionally bruised people work through their issues to find something more with each other.
Zander Shaw's the last single man in rockband, The Deviant, and has been fully embracing the single lifestyle for the last year through womanizing and extreme sports. He's started feeling frustrated though  with his band being on hiatus which has him happy to get a gig playing drums for another band while theirs is away at rehab.  It's a chance to get back to doing what he does best, but it also introduces him to a quirky artist with a painful past she's been running from.  Zander's a real player when readers first meet him, but the moment he meets Drew he's smitten.  He's fascinated by her and wants to discover all the secrets she tries to keep hidden, drawn to the pain she keeps hidden behind a facade of cool.  He too is hiding behind his rockstar facade, hiding from a past that's speeding ever closer to him.  Through all the ups and downs I found Zander a delicious hero who undertook a slow burn romance with a woman who's his kindred spirit.
Drew Kadence is a woman happy to keep on the sidelines, an artistic woman who just wants to hone her craft, but unwilling to be in the spotlight for fear her scars and secrets will come to light.  The moment she meets Zander is the moment everything changes for her as he works very hard to claim her heart, digs deep to discover the truth about what's holding her back from letting him claim her heart.  Her attempts to stay hidden have kept her with only a few friends, but it soon becomes apparent that she can't ignore him forever.  He's too charming and too persuasive in his flirtations.  Drew's a likable heroine, one who's clearly been hurt by her past.  She deserved some happiness after all she'd been through which is why I was rooting for her every step of the way.
This was an immensely satisfying romance of two people from very different lives whose mutual pain has them forming a connection.  Some of the facets of the story were familiar but I still found myself drawn to the characters and their acceptance of their pasts in a hard-fought journey to happiness.  After reading this I look forward to reading the previous book in this series as I thoroughly enjoyed this author's style and look forward to more of their romances set in the rockstar world.
My rating for this is an A-
*I got this book from the author for review in exchange for my honest opinion. 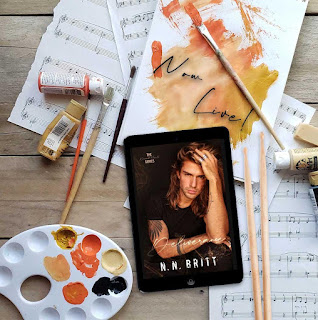 AUTHOR INFO:
N.N. Britt is a Los Angeles-based music journalist and photographer. Her photos have graced t-shirts, billboards, and CD covers. She pens realistic, thought-provoking novels about today's world of art and music and the flawed people who live in it. When she's not writing or drinking coffee, she's probably reading or attending a heavy metal show.
NEWSLETTER  |  FACEBOOK  |  WEBSITE  |  INSTAGRAM  |  BOOKBUB  |  TWITTER  |  PINTEREST
at May 21, 2021