Two motorcycle racers battle each other on the track while finding a sizzling connection off the track in the erotically charged story.  Keep reading to get a tempting taste of Wreckless by Katie Golding, then start counting down the days until this book hits shelves on May 25th.  In honor of this second installment in the Moto Grand Prix series make sure to fill out the form below for the chance to win 1 of 2 sets of Sourcebooks May releases too! 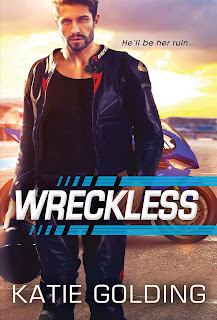