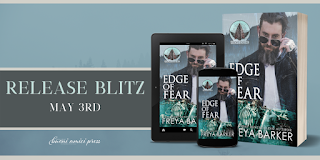 It's a case of opposites attracting once a bad boy MC member falls for the kindhearted new girl in town in this romantic and suspenseful tale that kept me on the edge of my seat.  Keep reading to get a tempting taste of Edge of Fear by Freya Barker, along with my impressions of it, then add this fourth installment in the Arrow's Edge MC series to your bookshelf! 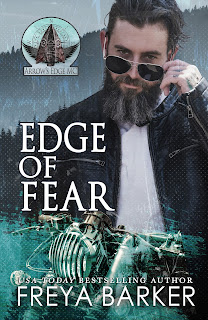 Ink and sawdust meets brisket and moxie
I’m a tattooed casualty.
A charmer, a fraud, a skeptic, and a carpenter.
My name is Tse.
I’m cocky enough to believe my own lies, but too oblivious to see the truth is already out there.
I’m a cautious perfectionist.
A sister, a scrapper, a dreamer, and a workhorse.
My name is Sophia.
I’m capable enough to plan ahead, yet too powerless to avoid getting blindsided.
We’re complete opposites—one who plays it safe, the other a thrill-seeker—but when old sins resurface bringing violence to the present, our path forward becomes clear. 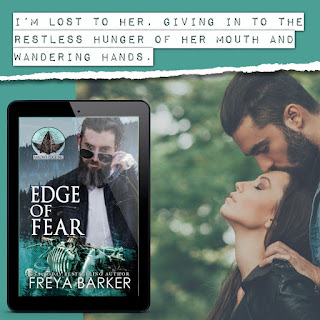 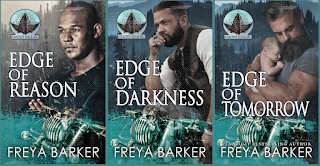 BUY THE PREVIOUS BOOKS IN THE ARROW'S EDGE SERIES ON AMAZON here. 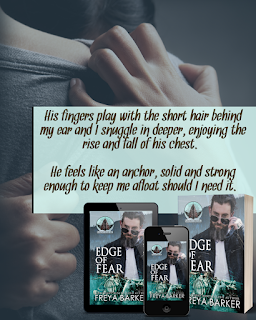 MY IMPRESSIONS OF THIS BOOK:
As a fan of MC-fueled romances I was immediately drawn to this book and its journey of opposites attracting against a backdrop of suspense and intense emotions.  Though I haven't read the previous books in the Arrow's Edge series, I had no problem getting pulled into the action of this story and look forward to going back to read all about the couples who came before (including early glimpses of these two).
From the moment Tse and Sophia meet the fireworks flare, particularly as one of his brothers is attracted to her too.  Though Tse wants Sophia he's tried to keep his distance over the last few months as he doesn't feel worthy of her and doesn't want to cause issues with a fellow brother, but with the possibility of his brother claiming her he decides to step up to the plate in a relationship full of sexual tension and push/pull moments as fate threw all sorts of danger their way.  With each turn of the page Tse shows himself to be a delicious hero!  He's definitely a player when readers first meet him, happy to keep his connections to women superficial, but once he sees Sophia his heart and mind is hers.  He's a man bruised by his past, a past that brought tears to my eyes for all that he endured and for the scars it's left on him as it once again rears its ugly head in this story's pulse-pounding conclusion.  Despite his heartbreaking past Tse is an endearing man, one who's very protective of but who listens to Sophia to give her the control that her ex took from her.  He has strong alpha tendencies too but is happy to stand by Sophia's side as they deal with all the danger coming their way.  On a whole Tse's a sexy and drool-worthy hero, one who touched my heart and soul while putting a blush to my cheeks!
Sophia's a wonderful heroine from the very first moment readers meet her.  She too has a painful past of her own that she just recently got away from courtesy of an abusive and controlling ex.  She's ready to start over, ready to retake control over her life by moving to a new city and starting a new job.  Leery early on of jumping back into a relationship, Sophia at first tries to keep her attraction to Tse to herself.  It's not long though before they find themselves in a relationship full of unconditional support amidst danger from villains and the town's growing drug trade.  Sophia is the kind of heroine you can't help but like.  She's smart, strong-willed, caring, and sees the goodness of Tse behind the grit and the tats.  Theirs is a relationship of balance where they each listen to and value the other in an unconditional connection and I became even more invested in their burgeoning romance with each turn of the page!
By The End, Ms. Barker has crafted an epic and steamy romance of two very different people who end up being perfectly imperfect together.  There's strong support between the two, a constant give and take that warmed my heart, and strengthened their connection.  Add in some scorching interludes and readers will find a romance worth cheering for.  Along with a captivating romance is an exhilarating bit of suspense that created some unexpected twists and turns.  The author threw in some compelling red herrings too, moments of danger and grit, in a mystery that kept me guessing until the very end!  Along with this likable main couple, and the thrilling suspense around them, was a cast of equally appealing secondary characters who I found utterly delightful.  The first character is Ravi, a troubled young man with a painful past who Tse takes under his wing, and through their time together each is made stronger.  Van Gogh the dog is another wonderful character, one who utterly charmed me throughout his interactions with others in the club.  Sophia's mother was another highlight.  Her parents might have been unconventional when it came to her upbringing, but her mother's humor brought a much-needed respite from all the danger and suspense in the story.  I also thoroughly enjoyed the glimpses we got of past couples and the other brothers in the club, these characters were larger than life with a mission to do good that endeared all of them to me.  Fans of MC romances will want to experience the Arrow's Edge MC series for themselves as it's an exhilarating thrill ride full of heart and soul that captivated me from the first page to the last!
My rating for this book is an A.
*I got this book from the author for review in exchange for my honest opinion. 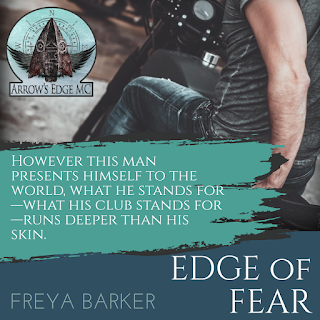 AUTHOR INFO:
USA Today bestselling author Freya Barker loves writing about ordinary people with extraordinary stories.
Driven to make her books about 'real' people; she creates characters who are perhaps less than perfect, each struggling to find their own slice of happy, but just as deserving of romance, thrills and chills in their lives.
Recipient of the ReadFREE.ly 2019 Best Book We've Read All Year Award for "Covering Ollie, the 2015 RomCon “Reader’s Choice” Award for Best First Book, “Slim To None”, and Finalist for the 2017 Kindle Book Award with “From Dust”, Freya continues to add to her rapidly growing collection of published novels as she spins story after story with an endless supply of bruised and dented characters, vying for attention!
FACEBOOK  |  TWITTER  |  INSTAGRAM  |  WEBSITE  |  GOODREADS AUTHOR PAGE  |  NEWSLETTER  |  BOOKBUB
at May 03, 2021