A young woman finds herself drawn to the new man on campus in this slow burn new adult romance that soon takes a complicated turn as issues of blind loyalty and domestic abuse come to the forefront.  Keep reading to get a tempting taste of Saving Us by Wendy Million, along with getting my impressions of this first installment in the Northern University series, then add it to your bookshelf! 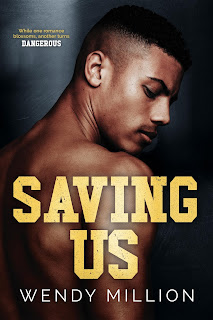 Hot, talented, and fresh to campus. Can Natalie trust the gorgeous new football player, or will his team loyalty win out?
*****
Natalie Chapman is drawn into a friendship and flirtation with Northern University's newest football transfer, Sebastian Swan, when her roommate and best friend, Annika, begins dating his teammate. Fresh off a breakup, Natalie isn't interested in hooking up with a player who has women chasing him all over campus.
But Sebastian claims his best quality is perseverance, and he has no problem pursuing Natalie instead. As the two grow closer, details of Annika's troubled relationship with the star quarterback come to light.  With the football team on the cusp of winning a National Championship, Natalie wonders if Sebastian's loyalty to his teammates supersedes all else. Can she trust him to do the right thing, or will he let her down when it matters most?
FIND AT GOODREADS here. 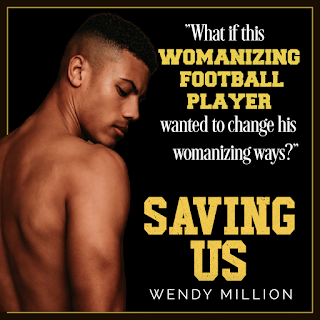 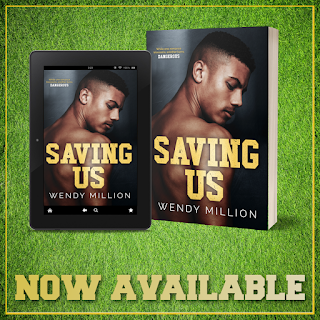 MY IMPRESSIONS OF THIS BOOK:
From the moment I started reading this I thought it would be a typical New Adult romance set in the world of collegiate sports.  But with each turn of the page I found this story to be something very different.  As one relationship starts, another deals with some of today's heavy issues in a storyline that was sometimes hard to see depicted.
Natalie and Sebastian are the two main characters of this story and readers watched as a slow burn connection brewed between them and as some really heavy decisions were laid out before them.  Issues of privilege based on status, male toxicity, loyalty, and abuse were depicted in a realistic way that showed the flaws of human nature and within the court system in ways that frustrated and saddened me.  The relationship between Natalie’s friend Annika and quarterback Johnny fuels many of the issues in this book, puts readers through the wringer, and creates all sorts of unexpected twists and turns.  Through all the grit and the growing connection between Natalie and Sebastian, readers will find themselves captivated by all the ups and downs.  Natalie’s a likable heroine from the very start, a smart and strong-willed young woman who doesn’t give away her heart easily.  She’s loyal to her friend Annika and stands beside her wholeheartedly as things turn ugly between Annika and Johnny.  When readers first meet Sebastian they see someone who lives up to all the usual stereotypes, someone a bit arrogant and cocky.  But as he becomes friends with Natalie he becomes more willing to show a softer side.  He becomes more dedicated in gaining her heart, a heart that soon gets stuck between his team and his new love.
This is a hard to read story at times, but I applaud Ms. Million for crafting such a realistic story that never sugarcoated the truth.  Readers are put through a gamut of emotions while rooting for HEA to be reached in the end and I recommend it to all those wanting something different and something that affects their heart and soul!
My rating for this is an A.
*I got this book from the author for review in exchange for my honest opinion. 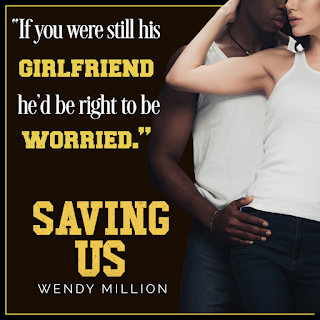 AUTHOR INFO:
Wendy Million is a Watty Award winner, and author of Saving Us, her newest novel. Her contemporary romances about strong women and troubled men have captivated her loyal readers. She is also the author of the romantic suspense series The Donaghey Brothers, and the contemporary romance When Stars Fall. When not writing, Wendy enjoys spending time in or around the water. She lives in Ontario, Canada with two beautiful daughters, two cute pooches, and one handsome husband (who is grateful she doesn’t need two of those).
NEWSLETTER  |  FACEBOOK  |  INSTAGRAM  |  TWITTER  |  TIK TOK
at May 17, 2021