A small town girl finds herself nanny to the son of a rockstar in this forbidden romance of choosing between what your heart and what your mind wants.  Keep reading to get a tempting taste of the Unplugged Box Set by Sigal Ehrlich, along with getting my impressions of this duet, then add it to your bookshelf.  In honor of this contemporary rockstar romance fill out the form below for the chance to win 1 of 6 e-copies of the Unplugged Box Set along with a $15 Amazon GC! 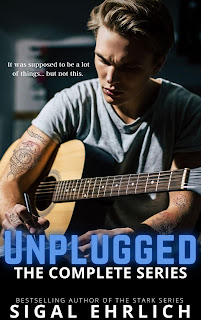 UNPLUGGED I
When Ivi boards a plane for L.A. to take a temporary nanny job, she tells herself it’s just a short diversion. Just a few months watching some celebrity’s kid, a short stop before her journey to follow her dream. Little does she know, it would bring on such a shift in the balance of her world. Would bring...
Him. Bring...Them
Both.
Into her life.
Tyler Lee Adams, a rock n’ roll legend, is used to getting what he wants, whenever he wants it. Including women. Living a celebrity life few dream of, he’s never known a desire that can’t be fulfilled. But sometimes, even rock stars can’t have it all. He soon discovers fortune and fame can’t solve all matters of the heart when the universe brings...
Her. Brings...Them. Both.
Into his life.
UNPLUGGED II
As Ivi boards a plane to L.A. to return to her rock star boyfriend Tyler Lee Adams, she’s filled with anticipation...and hesitation.
Their unexpected romance leaves her breathless...but is it too good to be true? Can a rock n’ roll legend and a small-town girl make it work for the long haul?
Tyler Lee Adams’s world has been transformed since Ivi came into his life. The many months spent on the road, the numerous parties, the countless women – they’re all in his rear view mirror. Learning to be a parent and maintaining a monogamous relationship is all that matters now.
But when Tyler’s fame threatens their bliss and Ivi’s longing for home pulls her away, will love be enough for their relationship to survive?
EXCERPT FROM BOOK 1:
“Hey, Ivi, wait up.” Trying to disregard The Feeling in my belly, I turn around.
Watching Tyler Lee close the distance between us in a V-neck Henley, layered with a white tee, worn jeans, and combat boots, I take a step back till I come in contact with the doorframe.
“Everything okay?” he asks a step away, tucking a loose strand behind his ear.
My brows slightly furrow. “Um, yeah. I’m just going to sleep. It’s late, and I wake up early with Jeremy.”
He nods, doing his unnerving, intense gaze thing. He lightly scratches his trimmed beard. “Dante upset you?”
“Oh, that.” Why does my voice sound so breathy? “He has very unique pick-up lines.” At unease with the whole having Tyler Lee near, I mumble, “Not that I think he tried to hit on me. That would be incredibly presumptuous of me. It’s just, his way with words is...”
“Why wouldn’t he try to hit on you?”
I gape at him, not sure what to answer. Instead, I say, “I think I handled it myself just fine. It’s okay, really.”
A low chuckle rolls out of his lips, firing up whatever is happening in my stomach. “Oh, that I saw.”
I lightly smile, finally having the strength to look him directly in the eyes. For a few beats, we stand in silence with our eyes locked.
“You got a...” His voice comes out mildly raspy. And as if in slow motion, his hand lifts up to my face. The pad of his finger touches my cheekbone. I can hardly breathe. His finger on my skin, his body about to fill my personal space.
He brings his finger close to my lips. “Make a wish.”
I blow on the eyelash resting on his long finger, my heart thrumming in my ears. “What did you wish for?”
Through the frenzied, unanticipated sensations taking over me, I manage to utter, “That would be telling.” To be honest, even if he insisted on knowing, I wouldn’t know the answer for my brain is a mash of heartbeats, lips, gazes, and proximity. Incredibly unnerving, wonderful proximity.
When his lips tip at the side, a light smile stretches mine. A little wrinkle forms between his brows when his eyes fall to my smiling lips.
He slightly leans in. His finger comes back to my face, only this time to gently brush my upper lip. My smile, together with my breath, disappears. With his finger still hovering over my lip, he says in a low voice, “Your lip, it curves so deeply when you smile.”
Involuntarily, my lips gap. It feels like butterflies are dancing pogo in my stomach.
His frown deepens, and his finger keeps caressing my lips when his face slowly dips closer. It feels like my heart is trying to fight its way out of my chest.
Tyler Lee Adams is about to kiss me.
I feel like crying but in a good way. A heartbeat and his lips near mine. Our breaths mix. His scent baths me. The warm air traveling from his mouth to mine brings in a heady lungful of seduction, man, and alcohol. His nearness—what’s happening—is too much.
I expel a shaky breath, sobering us both up. As though shaking out of a trance, we both jerk back. For a confusing stretch, we stare at each other. And then he leaves. No words. No backward glance. He walks away.
BUY LINKS:  AMAZON  |  iBOOKS  |  BN  |  KOBO  |  SMASHWORDS 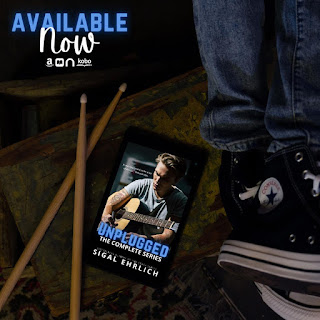 MY IMPRESSIONS OF THIS BOOK:
As a fan of rockstar romances I've read many releases from a variety of authors.  Though this is my first time reading a story from Sigal Ehrlich, it definitely won't be my last.  From its likable characters, to the slow-burn forbidden romance between a famous rockstar and a small town nanny, readers will find this an entertaining story that easily pulls you into the rockstar world.  Much about the romance between Ivi and Tyler feels familiar, but that doesn't make it any less enjoyable as these two people have to work hard to overcome their different backgrounds while finding time to care for the young and charming Jeremy.  It's a bumpy road for these two, a juggling of what the heart wants and what's best for those you love.  The more time Ivi and Tyler interact, the more sizzling their connection becomes and the more I cheer for them to reach their HEA.
Ivi doesn't know what to expect when she becomes nanny to the son of a famous rockstar, but she's only  caretaking for a few months before moving on to the job of her dreams...so it won't be too bad.  Little does she know the profound affect her new job will have on her as her heart quickly becomes entangled with both father and son.  When readers first meet Ivi they see someone young and somewhat naive to the ways of the world.  She has a big heart though and a desire to help others, focusing on the mission work that will start in a few months.  Things become much less clear though once she meets Tyler and Jeremy, once she starts to care for both of them.  She and Jeremy are a sweet sight to see as she encourages him to be the little boy his age reveals instead of the mini-adult he's been acting like.  The sparks fly once she and Tyler meet, with her protection of Jeremy being the impetus to their burgeoning romance. She's drawn to Tyler and through their continuing interactions she discovers the down-to-earth man behind the playboy facade in a slow-burn teeming with sexual tension. From the very start, through each turn of the page, Ivi is the kind of heroine you can't help but like.  She's a truly good person, one who knows what she wants, and goes after it in a world she's desperately trying to navigate while juggling the desires of her heart and mind when it comes to Jeremy and Tyler.
In many ways Tyler is the proverbial rockstar playboy, a man who enjoys all the feminine attention along with the glitz of the rockstar world.  He's a bit arrogant early on, someone used to getting everything he wants.  The more readers get to know him though, the more likable he becomes.  Never being in a relationship before, he jumps into this one with a bit of trepidation while revealing a backstory that's a bit sad.  He's clearly a great dad, and much of the story revolves around Tyler getting to know his son better, which warmed my heart and endeared him to me all the more.  Tyler might not be a perfect hero, but he's willing to work hard to get there, and it made for a sensual journey full of push/pull.
The first book of this duet ends with a pseudo-cliffhanger, one readers have seen before as his rockstar lifestyle is a roadblock to his and Ivi's HEA.  The second book picks up right where the first one ends and is a slow-burn romance, one that saw them juggling lives in front of the camera to life behind the fame.  It's a frustrating journey at times as things could've been wrapped up much sooner, but despite that I was still cheering by the turn of the final page.  Along with this appealing main couple was a cast of secondary characters that were an utter delight.  Among those secondary characters is Jeremy, a little boy wise beyond his years.  His reciting of facts showed a smart young man that had me wanting to hug him for wanting to make his dad proud.  His factoids were also sometimes funny which made me chuckle a time or two.  I was also drawn to Tyler's bandmates, the playful and brotherly bonds between them, and I hope to see them take center stage themselves in the future!  Even though this was a familiar romance it was a satisfying addition to the genre that fans of rockstar romances will want to read...while waiting for what this author has planned next!
My rating for this is a B+
*I got this book from the author for review in exchange for my honest opinion. 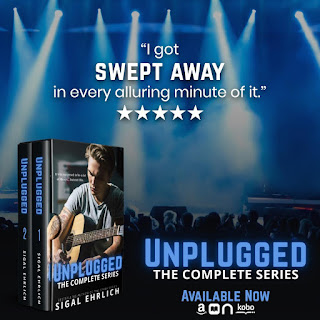 AUTHOR INFO:
Sigal Ehrlich is a bestselling author of refreshing, fun, and sweet romance books. She loves books, cold weather, and the occasional bubbly drink. Living as an expat for most of her life, Sigal has been lucky enough to visit many exotic places and meet some unique people from all corners of the world, while experiencing the sweet triumphs and travails of trying to acclimate to new "homes." Currently, Sigal calls the Czech Republic home where she lives with her husband and three kids.
WEBSITE  |  FACEBOOK  |  FACEBOOK GROUP  |  TWITTER  |  INSTAGRAM  |  BOOKBUB  |  GOODREADS AUTHOR PAGE  |  AMAZON AUTHOR PAGE  |  NEWSLETTER
**********GIVEAWAY***********
a Rafflecopter giveaway
at May 02, 2021