Book Cover Reveal for Sweet Like Poison by J. Wolf……..

Readers go back into the college world with this steamy tale of a young woman attracted to her next door neighbor and his fighting his mutual attraction to her...all while they join together in a battle against bullies.  Keep reading to get a tempting glimpse of Sweet Like Poison by J. Wolf, then start counting down the days until this third installment in the Savage U series hits shelves on August 18th! 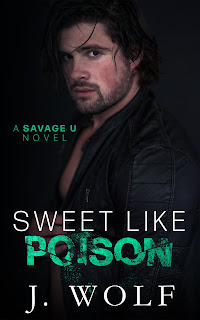 You need a keeper, Elsa.
The first time I laid eyes on the delicious mountain of a man, Lachlan “Lock” Kelly, he walked out of the room without giving me a single glance.You’re in trouble now.It’s my junior year at Savage U and life is grand. Except for the fact that Lachlan Kelly lives right next door, he acts like he doesn’t know my name, and he barely acknowledges my existence.I don’t get it. How can he so easily look away from me when he’s all I see?The ice queen is melting...A few angry frat boys and their arm candy make it their mission to ruin my semester and possibly my life. But I show those boys that messing with Elena Sanderson is a fatal mistake, and Lachlan surprisingly backs me up. And when he finally gives me his attention, I greedily soak up everything he has to offer.You’re arsenic-laced candyLachlan tells me I’m bad for him, but he can’t resist the pull between us anymore.I don’t break things.I know he’s not staying.When he goes, he’ll leave me tangled up in memories.I won’t play games.His promises have a time limit, even though I’m beginning to wish they didn’t.Even if it hurts...We were over before we ever began. 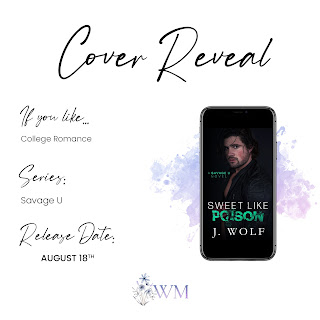 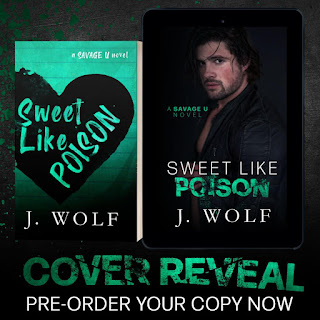 AUTHOR INFO:
Julia Wolf writes sexy rockers and badass women. She’s a huge believer in happily ever afters, no matter how complicated the road to get there is.
Julia lives in Maryland with her husband and three crazy, beautiful children. When she’s not writing romance, she’s reading it. Some of her favorite things are, in no particular order: goats, books, coffee, and Target.
at July 18, 2022