Fans of historical romances have reason to celebrate with the release of this tale of two people brought together amidst the weight of history putting their burgeoning attraction to the test.  Keep reading to get a tempting taste of Thumb Fire Desire by Carol Nickles, then learn even more about this book by visiting the other sites hosting this tour.  You'll also hear from the author talk about romanticizing historical events to pull readers into the action.  In honor of this emotionally engaging romance make sure to fill out the form below for the chance to win a $50 bookstore GC too! 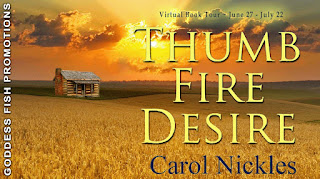 Words of Wisdom from Ms. Nickles…
I pulled my hair off the back of my neck. The long braid, wetted during my morning first swim at the campus center pool hung wet against the back of my sweatshirt. My shoulders scrunched involuntarily. My teeth chattered. I rubbed my hands together and reached to unfold a wooden seat in the cavernous lecture hall. I pulled a notebook from my backpack and read the label. Michigan History. I opened the notebook and fumbled for a pencil.
Professor Brown walked on stage, paused his elegantly dressed persona, and turned in a circle. From the top of his head to his wing-tip-clad feet, he quivered. He moved as if in the spell of the last refrain of Do the hokey pokey, you know, where you shake your whole self?
He faced stage left. He stood straight and tall, then bent in the form of a gunslinger. He shoved his hand over a pretend gun holster. He spoke to a character only he could see.
“Two Stickney?”
Professor Brown flipped to stage right and burst through an imaginary door as a changed man. “Who’s askin’?” he snarled in a slurred voice.
Professor Brown switched again and responded in the authoritative voice. “Joseph Wood, Deputy Sheriff of Monroe County, Michigan Territory here to arrest you for your actions in the Toledo War.”
“The hell you are!” The Two character screamed. He reached in his pants pocket, pulled forth a pocket knife, and stabbed Deputy Sheriff Wood in the thigh. Note: This scene required fast footwork for Professor Brown!
Professor Brown turned to face the class. “And that students, is a reenactment of the sole blood-shedding incident in the entire conflict of the Toledo War.”
I don’t remember all the details of the short-lived Toledo War, but what I do remember is the manner in which it was presented. Professor White brought history alive in the mannerisms of the characters—their speech patterns, their unique movements, and their interaction.
Love is the ingredient in Romance. What do you, the author, have in your bag of tricks to reel the reader in?
When you experience love, your senses are heightened. So your in-love character love sees the sky as a brighter blue. He smells the rain-soaked forest with the loose lungs of a beloved. He feels the warmth of the saddle soak into his thighs. His ears are open to the ten-note trill of a robin.
By weaving emotionally charged connections throughout an historical terrain, you will be creating a story that holds your reader captive. 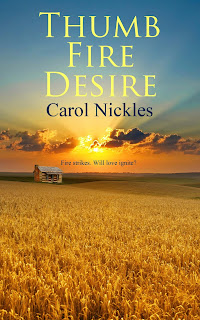 In the Spring of 1881, indigent seamstress Ginny Dahlke arrives in one of the earliest Polish American settlements-Parisville, Michigan. Deemed charmless and awkward by her mean-spirited sister-in-law, Ginny disparages her chance of securing love. But sought-after widowed farmer Peter Nickles is enamored by Ginny's perseverance, her pioneer spirit, and her inclusive acceptance of the indigenous peoples of Michigan. The seductiveness of a buxom heiress, a twisted story of an old-country betrothal, and the largest natural disaster in Michigan's history-The Great Thumb Fire of September 5, 1881, challenge their fledgling attraction and ultimate committal.
EXCERPT:
Peter sat atop the hay bale. Joseph’s shadow grew deeper and then faded away. For the first time, he and Ginny were alone—if he didn’t count a barn full of bawling sheep, milk cows dunking their heads in feed pails, Buster and Blue lazily flicking their tails, and slinky cats prowling the hay. His breathing came ragged. His chest puffed. He bent at the knees, shoved his hands under the bulk of shorn fleece, slowly aligned his spine, turned toward Ginny, and lost sensation in his arms. He dropped the pile, scattering barn dust and errant wool strands.
She stood idle. The sunshine pouring through the slats on the barn’s east side outlined her silhouette. The soft hollow in her neck swelled and emptied. A clothesline, bare for the warped wooden pins straddling it, swayed between its oak tree moorings behind her. She lifted the tray, set Joseph’s glass on it, and held her hand for his drink.
“I’ll wash your shirt. Sorry I spoiled it.” She leveled her gaze to his.
He turned the glass in his hand. A single mint leaf stuck to the bottom. He fished it out with a finger and rolled the bumpy foliage in his palm, releasing its scent. He rubbed the leaf on his wrist and opened his mouth. He bit into the sprig, savored the fresh prickly taste, and swished it around his gums and teeth. He swallowed. 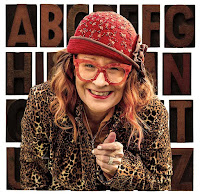 AUTHOR INFO:
Carol Nickles is the sixth generation of a German textile aficionado family. In 1881, her great- great-great-grandfather founded Yale Woolen Mill—the longest-lasting of Michigan’s once twenty-nine woolen mills. Carol earned a Master’s degree in Historic Clothing & Textiles at Michigan State University. Her thesis is a narrative of the Yale Woolen Mill. She held faculty positions at both Utah and Michigan State universities. She lives in West Michigan and enjoys spinning a tale, weaving a story, and threading a luring hook.
WEBSITE  |  EMAIL  |  FACEBOOK  |  TIK TOK  |  TWITTER
**********GIVEAWAY**********
a Rafflecopter giveaway
at July 21, 2022