Readers get a blast from the past today with this classic historical romance that brings together a writer and the man who seems like the perfect hero for her book, though he's a bit tarnished, as well as the perfect man for a real life HEA.  Keep reading to get a tempting taste of Renegade’s Lady by Bobbi Smith, a delightful blurb from the author about this classic tale, then learn even more about this book by visiting the other sites hosting this tour.  In honor of this western historical romance make sure to fill out the form below for the chance to win a $10 bookstore GC too!
Words of Wisdom from Ms. Smith......
Hi! I had soooo much fun researching Renegade’s Lady. The heroine is a dime novel writer who goes West to research her new book. If you’re not familiar with dime novels, they were the original paperback books from the 1800s. I even managed to find a few at antique stores. One I bought is titled The Golden Belt, and it was published by Beadle and Company in 1866. What a treasure! I can’t believe it’s held up this long. So I hope you enjoy Sheri and Brand, the half-breed scout, in Renegade’s Lady! 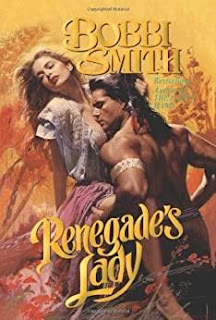 Looking For a Hero
Sheridan St. John was a successful writer who had no need for a man in her life...as long as she had one between the pages of her dime novels. But when her editor told her sales were off, Sheri set out for the Wild West in search of the perfect hero for her new book.Brand, The Half-Breed ScoutThe man Sheri found fulfilled her every requirement for a fantasy lover—half Apache, a tall, dark, and dangerous male—but he was completely wrong for a real-life mate. On the run from the law, Brand guarded his heart as the attraction between them destroyed her reservations, leaving Sheri with one burning need—to become the renegade’s lady.
EXCERPT:
Sheri sat watching Brand as he stood near the cave entrance. He was a tall, lean, broad-shouldered silhouette in the soft moonlight, and she shivered as she remembered the power of his touch. Strange feelings besieged her. For that one breathless moment in time when his lips had been on hers, she had been in ecstasy, and now...He had abandoned her without so much as a backward glance, leaving her unsure, confused...and a little angry.
“Do you want me to help you keep watch?” she finally asked, knowing the raiding party could be near.
“No. Stay there, where you’ll be safe,” Brand told her, knowing the last thing he wanted was to have her near him.
Brand stared out into the night, forcing himself to concentrate on keeping watch. He had to ignore the woman behind him. He knew now that he should never have kissed her. He wished there was some way to get her back to the fort tonight. The sooner he was away from her, the better.
Alone...He liked being alone. Then he had no one to worry about except himself.
He glanced back at her, and emotions he had long denied tore at him. They were under attack by renegades, and she was depending on him to keep her safe. He would not fail. He had to keep watch. He could allow himself no lapse. He’s made two mistakes that day already—missing the renegades’ tracks and kissing Sherri. He wasn’t about to make another.
BUY AT AMAZON here.

AUTHOR INFO:
After working as a department manager for Famous-Barr, and briefly as a clerk at a bookstore, Bobbi Smith gave up on career security and began writing. She sold her first book to Zebra in 1982. Since then, Bobbi has written over 40 books and several short stories. To date, there are more than five million of her novels in print. She has been awarded the prestigious Romantic Times Storyteller of the Year Award and two Career Achievement Awards. Her books have appeared on numerous bestseller lists. When she's not working on her novels, she is frequently a guest speaker for writer's groups. Bobbi is mother of two sons and resides in St. Charles, Missouri with her husband and three dogs.
WEBSITE  |  GOODREADS AUTHOR PAGE
**********GIVEAWAY**********
a Rafflecopter giveaway
at July 29, 2022