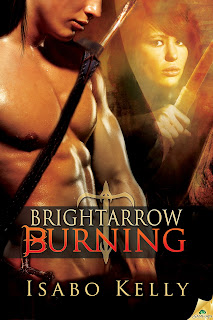 War tore them apart. Betrayal could bring them together…

Then some of the elves break neutrality to trade with the Sorcerers, and Layla is ordered to assassinate Althir, brother of the elf lord she has secretly loved all her life.

When Ulric of Glengowyn uncovers his brother’s plot—and that Layla is one of the assassins sent to stop him—his first instinct is to protect her from all possible harm. He’ll even use seduction, if necessary, to get her into a position to talk some sense into her.

Years of pent-up desire is too much for Layla to resist…and one touch unleashes an unquenchable fire that changes everything. Leaving Layla caught between duty and a love that could be her destruction. Or her salvation.


Isabo Kelly has created an intriguing read in Brightarrow Burning with its unique characters in a colorful and exciting world where human, fae, and others struggle for survival.  This read sucked me in from the start and I was surprised by how quickly the end arrived.  There was action and romance galore but I wish we'd seen more to the story considering how nicely the story flowed.
Layla has loved Ulric since she was young but kept it to herself since human/elf relationships are frowned upon for many reasons.  Little did she know that he too was attracted to her.  But with the tensions of war and with her life constantly in jeopardy he's now going to show her his true emotions.  Their sexual interludes are truly sexy and nicely spaced throughout the story and these moments perfectly expressed their feelings amidst the constant fear of death.  Layla is a strong heroine not afraid to do what must be done.  She wants to be on the frontlines and bristles when Ulric asks her to stop, which he luckily doesn't do often.  Ulric is physically strong and normally even tempered, but Layla brings out a barbarian side to him where he's willing to kill his own brother to protect her even though it goes against elf law.  He wants to keep her safe but knows he can't force her to his way of thinking.  He lets her make her own decisions but is always there to help her.  Their relationship is very equal even though he's vastly more powerful and I enjoyed their interactions both in and out of bed.

The problem I had with this story, and it's a minor issue, is that it felt like there should be more.  I felt like I was dropped into the middle of the story with a lot happening off page.  There was one great action sequence but other than that you wouldn't know there was a war going on.  The villain in this story didn't appear very villainous and the time spent with him was extremely minimal.  Big issues were resolved far too quickly and easily but I definitely felt like I was left hanging at the end of the story.  Layla and Ulric's relationship was solidified but little else felt settled.  I thought that maybe this book was used to set up a series which would explain some of my issues, but I'm not sure if that's the case.

Either way, and whatever minor issues I had with the story, it was still an enjoyable read.  The world was vividly depicted with a memorable and likable main couple and I was completely sucked in by Ms. Kelly's writing.  I do recommend this book and hope that Ms. Kelly will expand upon what was so nicely started here.


*I received this book from the author in exchange for my honest opinion.