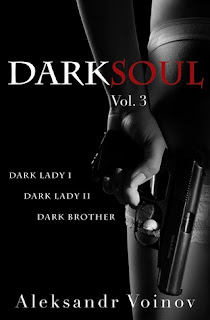 In "Dark Lady I," as Silvio Spadaro plans to take on the Russian hit squad that kidnapped his boss, he decides the best way to deal with four extremely dangerous men is to become an even more dangerous woman.

In “Dark Lady II,” Stefano discovers yet another disturbing – and arousing – truth about Silvio and how easily Silvio uses a man’s weakness for his own ends.

“Dark Brother” brings another player to Stefano Marino’s household. Franco Spadaro has just been released from the French Foreign Legion and is catching up with his little brother. In the middle of a war, a skilled sniper comes in right on time – but two Spadaros might be more than Stefano can handle.


*****************
The intrigue and emotional intensity continues in this third installment of Aleksandr Voinov's thought provoking series.  With the character of Silvio, Voinov has created a character that you can't help but like even as he's dripping in blood.  This book shows him at his most devious as he goes after the Russians who hurt Stefano in the previous book.  His plan was truly ingenious and I was left in awe of how well he played on the emotions of his enemies.  We're constantly seeing these intriguing glimpses of who Silvio is and what he's capable of and the more we learn the more drawn I am to him.
Another facet to his personality comes with the arrival of his brother Franco.  Franco just got out of the military and is at a loss of what to do.  Since he's a sharp shooter he'll be an asset in the fight against the Russians so he'll be staying around for awhile.  The bond between him and Silvio is intense and for some readers disturbing, but considering the rough childhood they had and how they had to rely on each other I can understand the intensity of their feelings right or wrong.  I'm intrigued by Franco and look forward to learning more about him.  He admires Stefano, considers him kind and caring and Franco should make for an interesting addition to the Silvio/Stefano relationship.
As this series progresses the reader gets pulled further into this dark and gritty world where no character is as they seem.  As the war picks up steam and the body count gets higher I can only hope that the characters I've come to know and care about stay safe.  I'm breathlessly waiting to start the next book in this series but dreading it too knowing that the end is fast approaching.  But thankfully with characters like these, they'll be with me long after the final page is turned.
My rating for this is an A.
*I received this book from the author in exchange for my honest opinion.
at March 07, 2012