Who hasn't wanted to be swept off their feet by a handsome man in an exotic city?  You can now get your chance, at least vicariously, by reading Love on Landing by Heather Thurmeier a sweet and sexy romance with two strong-willed characters.  Courtesy of Goddess Fish Promotions, Heather is here today talking about exotic locales in books and hosting a giveaway for a $25 Amazon GC.  So let's get right to Heather and learn more about her entertaining story......


Exotic Locations as Settings
The setting for LOVE ON LANDING is Paris. What better place to fall in love than in the city of love? But does an exotic locale have an impact on the storyline of a book?
In some cases I think it definitely does. Let’s say our heroine is going to throw caution to the wind and do something a little crazy for a change. Is she more likely to do that when she’s working her normal 9-5 job then home for her usual dinner of take-out Chinese and reality TV? Or is it more likely that she’d get a burst of crazy when she’s knee deep in strawberry margaritas with an uber hot cabana boy answering to her every whim at an all-inclusive in Cabo? In this situation, I think setting impacts the storyline for sure.
In other cases, setting is merely a place where the story happens and it doesn’t interact or influence the storyline in anyway. In LOVE AND LATTES, the first Meadow Ridge Romance, the story takes place in a bookstore. But it could have easily taken place in any other kind of store or business. The only thing that has to remain a constant is that Chase needs to be Julia’s boss and other than that, the setting of a bookstore has little impact or influence over the events of the book.
For Tali in LOVE ON LANDING, the setting is more impactful. She’s on a retail therapy trip to Paris to get over her ex. By being in a different city and out of her usual routine of work and friends, she’s able to finally relax, focus and reflect on her life and the changes she needs to make. In Tali’s situation, she probably could have gone anywhere outside of her normal community and had a similar experience, but Paris was especially helpful because it was somewhere she was familiar with and felt comfortable being. Because she was away from the chaos of her regular life, but still in a comfortable setting, she was able to really look inside herself and grow as a person.
If you’re debating about whether or not to set your story somewhere exotic, ask yourself a couple of questions:
-Is there some role that the setting has to play for the storyline to work?
-Is the setting the catalyst for the events that happen?
-Could this story take place somewhere else that might be better?
-Does the setting allow or force the characters to change over the course of the book?
Exotic locations as settings definitely can impact the storyline. I think what’s most important is to use the setting location that is right for your storyline. Don’t set it somewhere that doesn’t really work for the story just because you want the story to take place somewhere exotic. Be true to your story, and the setting—no matter where it is—will enhance your plot.
Thanks so much for having me here today!
Heather Thurmeier
~Heart, humor and a happily ever after. 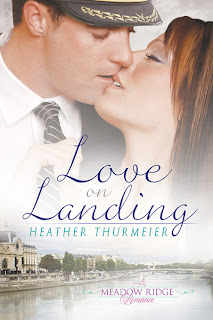 Love on Landing by Heather Thurmeier
When Tali tries to recover from a recent break-up with a trip to Paris for some retail therapy, she discovers shopping isn’t the only way to cure her broken heart. On route, she meets new pilot, Gavin. Tali and Gavin have instant chemistry and friction as their personalities clash at 30,000 feet.
One night in bed isn’t enough to quell the fireworks between Tali and Gavin and when tempers erupt, Tali’s ex-boyfriend is there to pick up the pieces. Too bad she’s finally realized what she really wants in life…and it isn’t her ex or the life her father has planned back home.
Now all Tali wants is the man who loved her enough to tell her what she didn’t want to hear, but can she win his heart back again on the trip home and find Love on Landing?
EXCERPT ONE:
Tali Radcliff leaned her head back against the headrest and gazed out the window. Raindrops splattered onto the double-paned glass blurring her view of the runway. Not that she could look past her sad, pathetic reflection anyway.
The reflection staring back at her turned the raindrops to tears on her cheeks and she instinctively wiped them away, only to find her cheeks sensitive and slightly swollen. She sighed and closed her eyes, desperately trying to block out the urge to start crying again. Instead, she focused on the white noise of the engines revving as the jet picked up speed for takeoff.
Her body pushed harder into the back of the soft, cream-colored leather seat, her stomach falling as the wheels of the aircraft left the solid tarmac below. The jet crept higher and higher, increasing the distance between Tali and the life she would temporarily leave behind—the heartache she tried so hard to forget.
If only it were as easy as a little distance.
“Don’t do it,” she whispered. “You left your tears in your bedroom, where they belong.” A beauty queen never cries unless she’s got a shiny new tiara on her head and a bouquet of fragrant flowers in her arms.
It was a good rule of thumb to remember, one she’d learned long ago and tried to stick to at all cost. Of course, sometimes she had to give in and cry, but not often. Tali wasn’t a crier, she was far too feisty to give into silly tears.
EXCERPT TWO:
“Gavin, can I get your help in here for a minute?”
She heard a loud groan and the chair in the waiting room squeaked as he stood. Her door clicked open and Gavin peeked his head inside the tiny room. His tired eyes instantly lit up at the sight of her reflection in the mirror. Exactly the kind of reaction she hoped an outfit like this would stir in someone. Especially someone as hot as Gavin.
“Can you lace up the back for me? It’s a bit tricky to reach.”
“Um—sure,” he said quietly, taking the edges of the material from her hands. His gaze shifted to her back and she was suddenly aware of the lack of clothing between her skin and his fingers.
Apparently he was aware of her naked flesh too.
His large fingers fumbled with the laces almost letting them slip. She quickly held the top tight against her stomach so it wouldn’t fall to the ground. Not that a situation like that would be completely unwelcome with a guy like Gavin, but she’d prefer not to have it happen in a changing room if possible. Her hotel room? Well, that was different.
Why was she so attracted to him?
‘Cause he’s hot. And fights back. And hot. 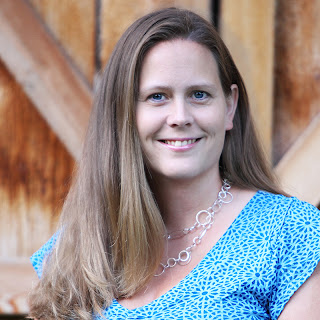 AUTHOR BIO:
Heather Thurmeier was born and raised in the Canadian prairies, but now she lives in upstate New York with her own personal romance Hero (aka her husband) and their two little princesses. When she's not busy taking care of the kids and an adventurous puppy named Indy, Heather's hard at work on her next romance novel. She loves to hear from readers. Heart, humor, and a happily ever after.
Website: http://heatherthurmeier.com
Email: heatherthurmeier@gmail.com
Twitter: @hthurmeier
Facebook: Heather Thurmeier, author
**********GIVEAWAY**********
Prize is a $25 Amazon GC
-Giveaway is OPEN TO EVERYONE!
-To be entered just leave a comment along with your email addy.
-One commenter will be chosen randomly from all comments made throughout the tour, so the more tour stops you make a comment on the greater your chances of winning.  A list of all participating blogs can be found here.
-Giveaway ends at 11:59 PM CST on 3/9.
at March 02, 2012