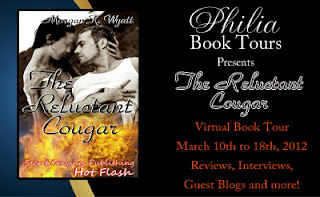 I LOVE stories that involve an older woman/younger man theme and recently came across this sexy and very entertaining read that I'm excited to introduce you to today.  Courtesy of Philia Book Tours and author Morgan K. Wyatt, I get to bring you a taste of The Reluctant Cougar along with the chance for one commenter to win an eBook copy of this book and another commenter to win an awesome gift basket.  So keep reading to learn more about this hot read and then find out how to enter this generous giveaway!

THE RELUCTANT COUGAR by Morgan K. Wyatt
Genre: Erotic Romance
Heat level: 4
Publisher: Secret Cravings Publishing
Release date: December 1, 2011
The very last thing Ashlee expected was to meet a hot, younger guy Nick, at her boyfriend’s funeral. The tall, soft-spoken man comforted her with stories of her
boyfriend since he studied under him. Grateful for Nick’s help and the shared connection they both shared with the deceased, they kept in contact.
Ashlee managed to ignore his hints for drinks and meetings putting it down to politeness. He felt sorry for
her. There was no way he could be interested in a woman at least a decade older than him. That was until her work posse caught scent of the story and urged her to give the man a chance. Ashlee knew she had to be the most reluctant cougar in the history of womankind, but what did she have to lose?
EXCERPT:
Ashlee watched his lips move as he casually explained the process of replacing the old, rickety bridge. Not one of the more sexy subjects she’d ever heard discussed, but those lips made it very hot. Lifting up on her tiptoes, she braced her hands on his shoulders and kissed him, softly. Dropping her heels, she moved her lips out of range before he could kiss her back.
Turning Ashlee walked away, surprised at her own impulsiveness. Right in the middle of a public park, she kissed him.
“Hey, wait, what was that about?” Nick lunged forward and caught up with a few long legged steps. The bridge ended and the bushes hid a wealth of birds calling and commenting in a variety of chirps and songs.
“Um, well…” Ashlee stalled, thinking of something clever to say. Putting her hands in her pockets, she walked a few more steps before stopping to study Nick’s puzzled face. “I guess I wanted things to be on my terms. If I wanted to kiss you then I will be the one to do it.”
Nick ran a hand over his face. “I’m cool with that. Maybe you feel the urge to kiss me coming on,” he teased, causing her to smile.
They walked in silence for a few minutes as Ashlee debated about the wisdom of kissing him. Glancing around discreetly, she checked for walkers. Finding none, she turned toward Nick.
He immediately stopped and held perfectly still, but his eyes were alert as he watched her. No easy way to steal a kiss from a tall man. Ashlee braced her hands on his shoulders as she stretched to meet his lips. Once her lips touched his, his arms went around her and snuggled her close.
His lips managed to be soft and firm at the same time. For a moment, she rested her lips on his, taking in the feel of his arms embracing her. His scent, a combination of some high-end cologne, sweat, and dryer sheet fragrance jumpstarted her libido into coming out of hibernation from the moment he touched her. Months had passed since she last had a man’s arms around her.
How did she forget how wonderful it could be? Did having a firm, younger body next to hers make it better? Finding out sounded like a discovery mission to her.
Moving her lips on his, she intensified the kiss. Ashlee’s tongue slipped out, teasing the corners of his mouth and tracing the seam of his lips. Nick’s arms tightened around her as he murmured encouraging sounds, opening his lips slightly. Amazingly, for once in her life, she was the romantic aggressor. Sliding her tongue past his parted lips, she ran it across his teeth before tangling with his tongue, giving Ashlee a sense of power. Nick’s hands dropped to her ass pulling her hips even closer and talk about strong attraction. His stretched long and hard against her belly.
“Nice day we’re having, isn’t it?” a male voice called out.
It couldn’t be Nick; his mouth covered hers. Nick’s hands pivoted her to hide the front of his body from a grinning gardener complete with hedge clippers in his hands.
“Excellent day,” Nick answered.
Why hadn’t she seen the gardener? Cut branch limbs littered the ground indicating he’d obviously been working away for some time. All her thoughts centered on Nick and kissing him to the extent, she missed seeing the man.
“Lots of folks out on a day like this,” the gardener continued, making such broad hints that even a lust-dazed mind could comprehend.
“You’re right,” Nick agreed, touching her elbow to turn Ashlee in the direction of the path.
The gardener’s eyes twinkled a little as he called out, “Enjoy the rest of your day.” Then he laughed as they turned to walk away. Nick assured him they would enjoy the rest of their day, drawing another laugh.

Morgan as a child had to suffer through movies with clueless heroines rescued by smart men. Her mother dutifully read her stories where princesses waited for princes to jumpstart their lives. There were no proactive female role models in the media at that time, with the exception of Wonder Woman. It is for this reason, and that it is fun, Morgan writes about strong women going after what they want, which is often a delectable cub. Those who wonder if the cougar tales have any reality to them should remember that writers often put themselves into every story they pen, even if it is a secondary character.


**********GIVEAWAY**********
There are 2 PRIZES:  1st Prize is an eBook copy of this book and is OPEN TO EVERYONE!  2nd Prize is for a gift basket that includes: a stuffed cougar (beanie baby), dark chocolate, bath salts, flower seeds and (possibly) a bracelet and is OPEN TO US ONLY!
-To be entered, leave a comment along with your email addy and whether you're US or Outside of US.
-Winner will be chosen using random.org and will have 48 hours to respond to my winner's confirmation email or a new winner will be chosen.
-Giveaway ends at 11:59 PM CST on 3/14.
at March 10, 2012