Readers looking for a unique read will get just that with this urban fantasy-fueled tale of body swapping and politics.  Keep reading to get a tempting glimpse of The Bull Riding Witch by Jamie Marchant, and discover even more about this unforgettable read by visiting the other sites hosting this tour, then add it to your bookshelf.  In honor of this cleverly crafted and action-packed tale make sure to fill out the form below for the chance to win a $20 bookstore GC too! 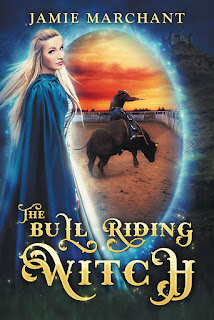 Daulphina’s father, the king of Asteria, has always wanted a male heir. Unfortunately for him, Daulphina’s magic means that will never happen unless her bastard half-brother displaces her on the throne. But she’ll take on all the gods herself before she lets that happen. He isn’t nice enough to be a good king.
But apparently, the gods don’t like being challenged because she’s flung across the void and into the dumpy old trailer and chiselled body of Joshua Killenyen, a rodeo bull rider from Alabama. With nothing to eat but Frosted Flakes and no knowledge how she got there, she better find a way home before she gets her head stomped in by the bulls she must ride. Or her brother will take the throne and reduce her people to slavery. Remember, he isn’t nice.

I woke with my head pounding and my tongue coated with the fur balls of ten thousand cats. I nearly gagged at the stench that filled the air, a scent that combined the reek of the inside of a knight’s armor after jousting with the odor of rotting flesh.
Confused, I examined my surroundings. Hanging on the wall facing me was a portrait of a huge bull with its head down and its heels kicked high into the air. Incredibly, a man, holding onto a rope with only one hand, sat on the bull’s back. Why would anyone ride a bull? Bulls were dangerous and impossible to control.
Piled high on the bedside table were plates covered with the remains of several meals, bowls with a few dregs of sour milk, and empty bottles. The sheet I laid on was stained with various substances I didn’t want to identify. Where was I? This was certainly no place worthy of me, the crown princess. Maybe I had somehow ended in the servants’ quarters, although I couldn’t imagine how.
I tried to sit up, and my head felt as if it were going to split in two. I groaned, and the sound was deep and masculine. What the . . .? I looked down at my arms. They were muscular and covered with hair. I grabbed my naked chest. My breasts were entirely flat, and my chest was covered with thick, coarse hair. When I rubbed my hand across my face, I felt thick stubble. I looked down at the short clothes, which were the only thing I was wearing; there was a bulge that just shouldn’t have been there. I lifted the waistband and peeked. Dear gods, how had I gotten one of those? I poked it with my finger, and it twitched. I snapped the waistband closed and jumped away, but I couldn’t get away from the body I was wearing.

GET A PRINT COPY FROM BN here. 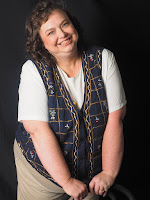 Jamie began writing stories about the man from Mars when she was six, and she never remembers wanting to be anything other than a writer. Everyone told her she needed a back up plan, so she pursued a Ph.D. in American literature, which she received in 1998. She started teaching writing and literature at Auburn University. One day in the midst of writing a piece of literary criticism, she realized she’d put her true passion on the backburner and neglected her muse. The literary article went into the trash, and she began the book that was to become her first novel. She writes about the fantastic . . . and the tortured soul. Her poor characters have hard lives. She still teaches writing and literature at Auburn University. She is the mother of a grown son.