A woman who prefers to be alone finds herself surrounded by holiday love in a small town as well as trying to fight her attraction to the town’s sheriff in this charming tale.  Keep reading to get a tempting taste of Cowboy Christmas Jubilee by Dylann Crush, then add this sensual and heartwarming romance to your bookshelf.  In honor of this second installment in the Holiday, Texas series make sure to fill out the form below for the chance to win 1 of 5 copies of the first nook in this series too!

Merry Christmas from your new friends in Holiday, Texas:  The most celebratory town in the South!
When Jinx Jacobs's motorcycle breaks down outside Holiday, Texas, the last thing she wants is to get stuck in the cheery little town, especially during the holidays. The whole place has gone Christmas crazy, but all she has to do is stay out from under the mistletoe—and do her best to keep that unnervingly attractive cop off her back.
Single dad and sheriff’s deputy Cash Walker doesn’t have time for romance, and yet something about the tempting loner twists his stomach up tighter than a tangle of tinsel. He may have finally found the missing piece in his life…but with Jinx so determined to avoid putting down roots, convincing her to stay may just take a Christmas miracle. 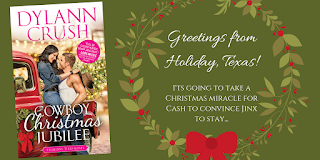 Dylann Crush writes contemporary romance with sizzle and sass. A romantic at heart, she loves her heroines spunky and her heroes super sexy. When she’s not dreaming up steamy storylines, she can be found sipping a margarita and searching for the best Tex-Mex food in Minnesota.
Although she grew up in Texas, she currently lives in a suburb of Minneapolis/St. Paul with her unflappable husband, three energetic kids, a clumsy Great Dane, a rescue mutt, and a very chill cat. She loves to connect with readers, other authors and fans of tequila.