After the massive success of a previous anthology written in support of the amazing charitable organization 4 Paws for Ability, ten of today’s best authors are back with another scorching collection.  The website Once Upon An Alpha, along with 4 Paws for Ability and a selection of bestselling authors, bring you this page turning, limited edition, anthology that's sure to keep you up well past your bed time and craving your own Alpha of Seduction.  Keep reading to get a tempting taste of the Alphas of Seduction Anthology, along with my impressions of it, then add this collection to your bookshelf! 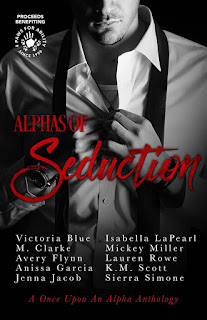 A glance. A touch. A word. And then it begins...
When an alpha falls in love, it’s not just about the fire. It’s the spark. The moment he’s pushed to his limits by the person who will transform his life and his heart forever. He just doesn’t know it yet...
The push. The pull. The possibilities...
The hottest heroes. Their greatest challenge. Nothing they’ve ever conquered will equal the ultimate quest of all–or the excitement of that journey. Nobody knows this better than twelve of your favorite romance fiction stars, bringing you their ultimate alpha males in short stories meant to make you smile, swoon, and celebrate the best part about falling in love...
The seduction.
Authors Contributing to Alphas of Seduction
Victoria Blue - Threadbare
Author Mary Ting/M. Clarke - Always and Forever
Avery Flynn - Little Tease
Anissa Garcia - Lost Seduction
Jenna Jacob - Seducing Sofia
Isabella LaPearl- Just A Little Mischief
Mickey Miller - Picked Up
Lauren Rowe - The Secret Note
KM Scott - Hard As Stonee
Sierra Simone - Red and White 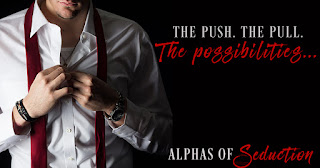 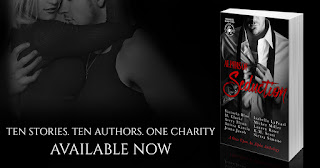 The Alphas of Seduction Anthology offers readers a wide range of themes and genres and will entertain readers for a few hours when you read it as a whole or you can experience it as little decadent delights when reading stories one at a time.  From ten of today’s best authors this collection contains stories that will make you blush as well as cheer and while some are just the beginning other stories are wrapped up in a beautiful bow.  Like most anthologies, some stories are more successful than others.  Those that had my favorite themes we’re the ones that I was drawn to and most satisfied by at the turn of the final page.  Even those that didn’t leave a lasting impression I still found them to be nice additions to a collection that aims to satisfy all readers.  Of all these stories my favorites were:

Lost Seduction by Anissa Garcia - In a tale of a woman trying to rid herself of her virginity, readers will find themselves charmed by the immensely likable heroine whose night doesn’t go as planned.  Instead of an escort showing up at her door, it’s her best friend’s boss that ends up making her pulse race and her heart flutter.  It’s a quick read that I wish had been longer, as I loved the crackling connection of the main couple, but what was there set my tablet on fire and put a smile on my face.

The Secret Note by Lauren Rowe - In a story of second chances Ben and Kaylee were a combustible pairing.  Kaylee was a bold heroine and it’s through her eyes that we watch them get together.  Ben’s the shy and quiet Aussie who just happens to be a virgin.  Their first pairing was scorching and sweet and years later their reunion left me breathless as Ben was utterly focused on claiming Kaylee forever this time around.

Red & White by Sierra Simone - In the only ménage in the collection, two women find themselves caught in a snowstorm while saving the life of a sexy stranger.  This was a great way to end the anthology as it was sexy and straightforward.  Scarlett and Snow are both strong-willed and Liam’s a perfect match.  The close quarters amped up the sensuality while the erotically-charged encounters heated me up on cold night in a story that ended sooner than I wanted it to.


The remaining stories made this a well-rounded collection with appealing characters.  One or two stories left me with a cliffhanger, while one spent too much time setting the storyline up, but on a whole I found a kernel of delight in all of these ten romances.  The profits from this anthology go to an amazing cause and I applaud each author for being a part of all this and I recommend it to all readers looking for a nice variety of scorching storytelling.

*I got this book from the authors for review in exchange for my honest opinion.
at October 17, 2018