The 1001 Dark Nights series has a new addition hitting bookshelves today and it’s reason to celebrate!  Keep reading to get a tempting taste of Strong by Kylie Scott, along with my impressions of this rock star novella, then add this next installment in the Stage Dive series to your bookshelf too! 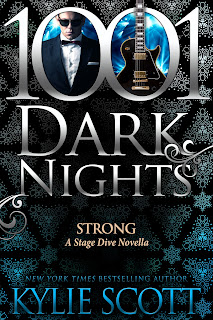 When the girl of your dreams is kind of a nightmare.
As head of security to Stage Dive, one of the biggest rock bands in the world, Sam Knowles has plenty of experience dealing with trouble. But spoilt brat Martha Nicholson just might be the worst thing he’s ever encountered. The beautiful troublemaker claims to have reformed, but Sam knows better than to think with what’s in his pants. Unfortunately, it’s not so easy to make his heart fall into line.
Martha’s had her sights on the seriously built bodyguard for years. Quiet and conservative, he’s not even remotely her type. So why the hell can’t she get him out of her mind? There’s more to her than the Louboutin wearing party-girl of previous years, however. Maybe it’s time to let him in on that fact and deal with this thing between them.

“Ooh, busted,” said Lizzy. “The bodyguard caught you looking.”
“Shut it.” I inched my chin up a bit, trying not to frown because frowning gave you lines. “Sam and I have known each other for years and nothing has ever happened. You’re completely wrong about this.”
“Am I?”
“Yes, there’s nothing between us.”
“So that’s why you were staring at him?”
I chose not to answer that. “And you know he prefers to be called executive protection officer instead of bodyguard.”
At this, Lizzy burst out giggling, a malicious glee in her eyes. No wonder I liked my sister-in-law these days.
Ben shot us both an irritated glance. We both ignored it.
Of course, I’d known Sam would probably be here. Rock stars going out in public could be a delicate thing. People had a tendency to get overexcited. And while one person wanting an autograph wasn’t a problem, twenty or thirty of them suddenly swarming definitely could be. Having once been part of the entourage, I’d seen it happen to Ben and his fellow Stage Dive band members enough times to be wary. And you couldn’t get by with ordinary security. Rock stars needed protection from their over-zealous fans, but on the other hand they didn’t want the fans roughed up or hurt in any way. It required a delicate balance: control, experience, and a whole gamut of scary physical skills. Hence Sam.
Still, Portland seemed generally less crazy than the good old days back in LA. All of the guys seemed calmer and more settled away from the constant craziness of the party scene. Not to mention the effect of all of the wives/partners and various offspring. The biggest rock band in the world had officially been domesticated.
It was kind of cute. Or sad. I don’t know.
“Sorry, I didn’t mean to stir you,” she lied. “What do you think of your brother’s new musical bromance?”
On the small stage set up in the corner of the room, a young man wailed his heart out while playing an acoustic guitar. Much angst about a girl who only called him after midnight. Trust a rockster to turn a simple booty call into a heartbreaking ballad. The song was damn good though. He had talent. If only I hadn’t had my fill of the type when I was younger. The kid looked to be in his early to mid-twenties. Lanky with lots of tattoos. Your typical rock ’n roll Prince Charming. Gag. These days my type ran more toward…actually, what I needed or wanted in a male was a total mystery.
And my gaze did not stray back to Sam. That did not happen. 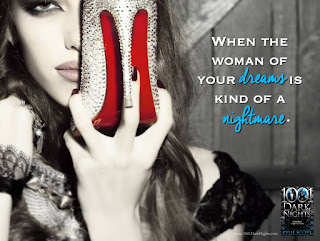 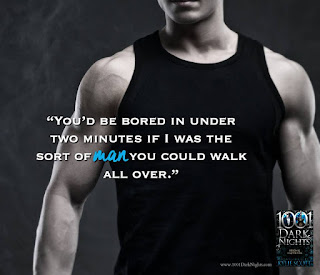 Fans of the Stage Dive series will enjoy this nostalgic return to the sensual rock star world these eclectic men and women inhabit.  Returning fans will love to get an update on old favorites while new readers will find this a decadent delight tempting them to read more.  From the first page to the last all readers will find themselves rooting for the main couple, opposites attracted to each other for years who finally go after what they both want in an emotional journey full of blush-worthy interludes, sweet words, and hard truths.

With her brother Ben a member of this famous rock band, Martha’s been on the periphery of their world and has made her presence known in a few less than flattering scenes throughout the series.  With her dating fellow bandmate David, and with their break-up, lots of hard feelings rose to the surface that had her fighting back in jealousy when David found his own HEA.  Since then Martha seems to have set herself apart from others, but by moving in with her brother’s new family she’s hoping to reconnect. Playing nanny to her nephew is just one step in feeling like part of the family, the other is finding romance with the steady and loyal band bodyguard Sam.  Together they balance each other out, despite their very obvious differences.  She’s a bit superficial, a bit abrasive, and not very demonstrative when it comes to showing emotions.  She likes to be in control and doesn’t like to put her heart on the line after it being crushed one too many times.  Sam pushes her to be a better person though and I liked who she became in his presence.  Though I found her more likable at the end, I still must admit that she’s not my favorite heroine.  Her vengeful actions in the past has left my impressions of her a bit tainted, but I do appreciate her trying to be better.

Sam’s an appealing secondary character but feels secondary here still as Martha takes center stage to work through her issues.  I had hoped to see more of him, more interactions with him and the other characters, but despite the less time spent with him I still found him immensely drool-worthy.  He’s a steady presence, loyal and hardworking, who’s finally ready to find his own HEA.  For many years he’s been attracted to Martha but has held back as she set herself apart from them all.  With her return home though he finally has the chance to make her his and it’s a slow and methodical journey he undertakes in winning her over.  Their scenes together are combustible with him carefully guiding her into doing what’s right, getting her past her lonely boundaries, and helping her show a softer side.  He’s a bit older and wiser and was a sexy and strong support to Martha and is a delicious appetizer who I wish readers could’ve gotten a bigger sample of.

On a whole this was an entertaining novella of finding your self-worth and making amends set on the edge of the rock star world.  The main couple is a good match and balance each other out nicely.  Their romantic encounters are sensual and well-spaced throughout the story, full of witty banter amidst a verbal tug of war.  Life for the members of Stage Dive has become domesticated and it was a heartwarming sight to see as baby bottles have replaced beer bottles.  The banter between the guys is still funny and snarky in a brotherly way, particularly coming from drummer Mal.  Seeing them continue to gain fame, while mentoring a new singer, has me hoping we’ll see them again soon despite an ending that felt very final.  No matter what happens in the future though this has been a fun and flirty series of books with this installment a decadent delight that I recommend to all fans of rock star romances.

Kylie is a New York Times and USA Today best-selling author. She was voted Australian Romance Writer of the year, 2013 & 2014, by the Australian Romance Writer’s Association and her books have been translated into eleven different languages. She is a long time fan of romance, rock music, and B-grade horror films. Based in Queensland, Australia with her two children and husband, she reads, writes and never dithers around on the internet.