Book Spotlight on Misadventures With A Manny by Toni Aleo (REVIEW)

It’s a sweet and sensual connection brewing between a newly-divorced woman and the young man with a big heart who’s the caretaker to her children.  Keep reading to get a tempting taste of Misadventures With A Manny by Toni Aleo, along with my impressions of it, then add this sixteenth installment in the Misadventures series to your bookshelf! 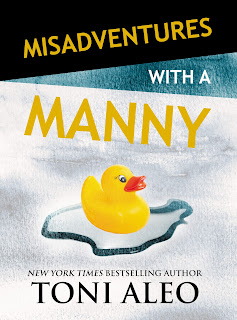 Vera Woods is at her wit’s end.
Her husband has run off with the nanny, leaving Vera with a broken heart, three very angry sons, and even less time to juggle the demands of family and her career. After her boys scare away a sixth replacement nanny, Vera is out of time off from work and desperately out of options. Still nursing an aching heart, she turns to an unlikely source for help―a manny.
Lincoln Scott is no stranger to family chaos. But rather than grow jaded, he has thrown his natural talents into building his own business―providing live-in childcare for families as a manny. The money is great and the perks are a blast, but when his family of six years moves to Germany and their plans to bring him along fall through, Lincoln is suddenly unemployed and aware of how much of himself he’s given to other people’s families.
Brought together by circumstances, Lincoln and Vera’s mutually beneficial business arrangement becomes complicated by the undeniable chemistry they share. Vera needs a manny and Lincoln needs a job, but they both may have found the very thing neither one had realized they needed―a whole lot more.
***Misadventures is a romantic series of spicy standalone novels, each written or co-written by some of the best names in romance. The stories are scandalous, refreshing, and, of course, incredibly sexy. They’re the perfect bedside read, a ‘quick blush’ for the reader who loves a page-turning romance. 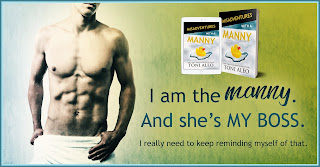 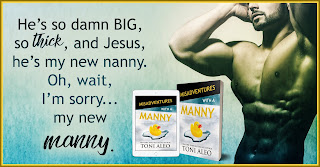 After a week of turmoil courtesy of real life this is just the kind of book needed to heal.  It’s a fun and flirty read full of heart and soul that brought a smile to my face while empowering me as someone worthy of love and happiness.  It introduces readers to a near-perfect hero and a heroine and family with problems of their own that kept me fully invested in their ups and downs.  By the turn of the final page I was left cheering and ready to find my own manny to make my life complete!

Lincoln Scott’s the lone son in a family with six sisters and it’s helped him embrace his softer side, embrace his role in caring for kids as a manny.  After his most recent placement ends, much to the breaking of his heart, he agrees to come work for the recently divorced sister-in-law of his best friend which changes his life irrevocably.  The moment he meets Vera it’s clear they have a crackling connection, but it’s a connection that he battles with as she’s his boss. The closer he gets to her, the more important he becomes to her three boys, the more entwined Vera and Lincoln’s hearts become too.  Through their sweet and sensual journey to HEA Lincoln’s shown himself to be loyal and loving.  He’s supportive to not only the boy’s tender hearts but also as Vera continues to battle with her truly malicious ex-husband, Simon.  Lincoln encourages her to be strong while showing his protective side and it is a delicious combination. Lincoln’s words and deeds pulled at my heartstrings as he voiced from the very start his love and attraction to Vera.  His devotion never faltered and when everything came to a head he proved his devotion in a very bold act that endeared him to me.  He wore his heart on his sleeve and is yet another addition to my list of book boyfriends as everything he said and did kept me wrapped up in a sensual blanket.

Vera Woods was a wild child growing up, but her teen pregnancy had her marrying young and took her life in a very different direction.  The death of her parents also left her vulnerable to one man’s manipulations with his constant belittling and infidelities leaving her with low self-esteem.  Though she fell out of love with Simon long ago she’s still left reeling by their divorce and is desperate to do all she can to help her boys get through this rocky time where their loyalties feel divided.  After terrorizing other nannies, her sister Riana introduces her to someone who seems to be the answer to her prayers.  The moment Vera meets Lincoln she knows he’ll be perfect for her sons but is immediately worried about the sensual feelings he engenders in her.  As they fight their attraction fate (and Riana) conspires to bring them closer together in scorching encounters both in and out of the bedroom.  It’s not long before decisions about the future rise to the surface, forcing them to admit their feelings, just as family interventions complicate things even more.  Through it all Vera’s a likable heroine.  She’s devoted to her sons to the exclusion of her own needs, desperate to take the high road every time her ex does and says something hurtful.  She’s been lonely though, believing all the negativity and sleights her ex hurls at her.  She has low self-esteem when we first meet her and it’s a slow journey to empowerment courtesy of Lincoln’s supportive words and deeds. Being with him brings out her long-dormant sex-kitten side which made for numerous scorching encounters that burned up my tablet.

On a whole this was a delightful read with a well-matched main couple.  Their attraction was immediate and it led to a sweet and sexy journey full of heartfelt talk and erotically-charged encounters.  They both were clear in their desire for each other which is why the intervention from their family was so frustrating. Their intervention fueled her fears and put their HEA in jeopardy.  It was only because of the delicious hero, and his talent for being loyal and talking things out, that gave this book such a heartwarming conclusion that was the highlight of my week.  Readers looking for a sexy yet heartwarming read will find all that and more in the pages of this delightful romance with a cast of immensely appealing characters and a charming narrative.

My name is Toni Aleo and I’m a total dork.  I am a wife, mother of two and a bulldog, and also a hopeless romantic.  I am the biggest Shea Weber fan ever, and can be found during hockey season with my nose pressed against the Bridgestone Arena’s glass, watching my Nashville Predators play!  When my nose isn’t pressed against the glass, I enjoy going to my husband and son’s hockey games, my daughter’s dance competition, hanging with my best friends, taking pictures, scrapbooking, and reading the latest romance novel.  I have a slight Disney and Harry Potter obsession, I love things that sparkle, I love the color pink, I might have been a Disney Princess in a past life… probably Belle....and did I mention I love hockey?