Opposites attract in this combustible tale set in the best of both worlds...the exhilarating world of sports and the gritty MC world.  Keep reading to get a tempting taste of Talkin’ Trash by Lani Lynn Vale, along with my impressions of this crackling couple’s verbal tug of war romance, then add this second installment in the Bear Bottom MC series to your bookshelf too! 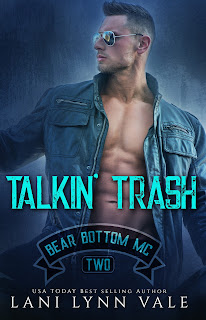 Linc has two very important things on his mind—professional football and his motorcycle club.
What he does not have on his mind is the woman that drives him crazy and makes him want to do stupid things, like throw caution to the wind.
Nope, not Linc.
At least, that’s the lie he tells everyone.
In reality, every time Conleigh’s name is mentioned, he squirms.
She’s everything that he wants, wrapped up in a cute little package that is stamped ‘hands freakin’ off.
She’s four years younger than him, in school to be a doctor, and thinks football is stupid.
Even more, Linc and Conleigh get along like oil and water.
There’s not a single second that they’re in each other’s presence that they’re not at each other’s throats.
But all it takes is hearing that she’s in trouble for Linc to drop every single thing—football and MC duties alike—and head to her side.
A side that he’ll remain at until they either kill each other, or finally give into the heat between them.
Either way you look at it, he’s well and truly screwed. 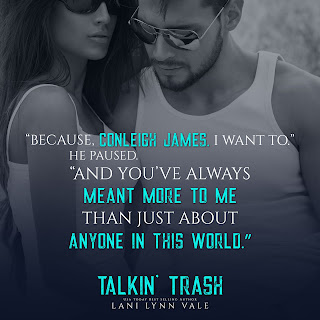 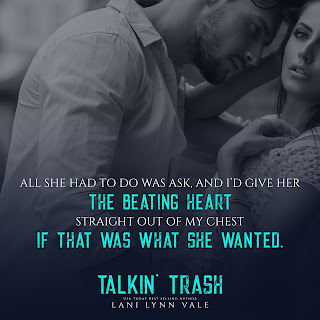 Fans of friends to lovers romances will find this a charming read full of sexual tension that invites readers back into the world of the Bear Bottom Guardians MC.  Larger than life characters, fun and flirty banter, and a memorable main couple fuel this sensual romance of a long-simmering attraction that becomes oh so much more due to a bit of gossip.  It’s a romance full of heart and soul that kept me captivated from the first page to the last and is a satisfying addition to the series.

Throughout the books focusing on the Dixie Warden MC, readers have watched Linc James grow up from a gangly young man to a star football player.  Throughout that time he seems to have gotten everything a man could want...money, fame, and women.  All is not what it appears though as he’s been left wanting, waiting in painful anticipation, to claim Conleigh as she was a young girl when they first met.  The moment he met her though he knew she was the one for him and has been at war with himself after receiving threats from her stepfather to stay away.  No longer content to watch her living life without him has him wooing her wholeheartedly through scorching words and deeds that soon takes on a desperate feel when her life gets put in danger.  Linc’s a drool-worthy hero, unabashed in claiming Conleigh, and it made for an erotically-charged journey to HEA.  He’s sweet, sexy, and a bit snarky which added a bit of humor to his interactions with others and put a smile on my face.  He’d do anything to make her happy, found humor in the lie fueling their pairing, and together they were a formidable couple that kept me thoroughly entertained.

Conleigh James is a hard working young woman determined to never again be as poor as she was growing up.  She’s currently nursing but is undecided that that’s where her heart lies, which makes Linc a delicious distraction after years of doing nothing but studying and working.  From the moment she met Linc he fascinated her like no other.  She would’ve gladly gone wherever he led her, but with her being four years younger than him, their fathers warned him away from her.  It was a heartbreaking decision that made her feel unworthy and led to many wasted years of loneliness for them both.  With Linc no longer willing to wait though Conleigh soon finds herself swept off her feet, caught in his sensual web, and holding on for the ride of her life through love and danger.  Conleigh’s a likable heroine who had a tough upbringing that still affects her today when it comes to her self-esteem.  She’s a strong-willed woman who gives as good as she gets in her combustible interactions with Linc, both in and out of the bedroom.  When another MC seeks to infringe on the area she’ll find herself stuck in the center of a war that brings out an even more protective side to Linc that had me rooting for them throughout this book’s exhilarating conclusion.

This was a decadently delightful romance courtesy of a charmingly fun and flirty main couple.  Young love became a love full of heart and soul as Linc and Conleigh were clearly destined to be together from the moment they met years ago.  Moments of witty banter were nicely balanced with scorching encounters to keep me fully invested in their coupling and it kept me frantically turning the pages in anticipation.  Along with a crackling romance came a bit of suspense that didn’t exactly ring true.  The villains seemed to come out of nowhere and the motivations behind their attacks felt a bit melodramatic.  Despite that, their actions gave readers glimpses of other MC members that have left me intrigued. The usually quiet and isolated Hoax and flyboy Zee were just two of the sexy MC riders whose stories need to be told.  On a whole though this was an immensely satisfying read from an author who’s becoming very reliable when it comes to crafting drool-worthy heroes. 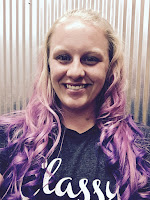