Opposites attract in this tale of a woman whose family finds sudden wealth and a man who’s been wealthy his whole life but longs for something more.  Keep reading to get a tempting taste of Ensnared by J.S. Scott, then add this series starter to your bookshelf.  In honor of this first installment in The Accidental Billionaires series make sure to fill out the form below for the chance to win a digital copy of this book as well as a $25 Amazon GC too! 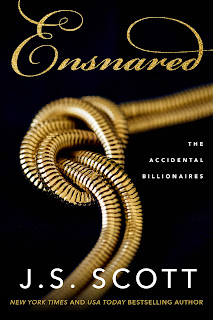 Wildlife conservationist Jade Sinclair isn’t used to having money. But when she and her siblings learned they were part of the mega-rich Sinclair dynasty, they became billionaires overnight. Jade doesn’t even know how to act rich, especially when she’s dealing with an arrogant, privileged, unreasonably sexy snob like Eli Stone.
Unlike Jade, Eli grew up rich, and he just keeps getting richer. Eli is always looking for an adventure, and he’s found an inviting one in Jade—as resistant as she is irresistible. His less-than-honorable plan? Get her alone in the wilderness by buying out all the spots in her survival class.
Calling a truce, they strike a bargain: Jade will teach Eli basic survival skills, and he’ll teach her how to navigate the world of the wealthy elite. Jade has only one condition—she will not let herself be seduced by him. But some things are easier said than done...

I slowed down as I turned off the main highway.
I pulled onto the rough road to the small cabin on the property. There were enough bunk beds in the rustic structure for everybody, but students had the option of pitching tents or building their own shelters if they chose.
After I parked my Jeep, I unloaded some supplies and checked out the cabin. Although I encouraged foraging and trapping, I always made sure to have enough basic food so students didn’t starve.
I sat on the wooden steps and took a deep breath, relaxing to the sounds of the birds and the feel of a light breeze that caressed my skin.
I opened the book I’d brought along, the latest from my favorite erotic romance writer. The reading material was one of my secret pleasures, maybe because I’d never been overwhelmed by lust for any man, but I loved to read about the possibility.
I was mostly a realist, but I loved the fantasy of some hot guy sweeping me off my feet.
Other than a boyfriend in college who had used me to help him get his degree and then disappeared after graduation without a word, I’d never been in a sexual relationship.
Honestly, my ex hadn’t exactly rocked my world. But I liked to think that love and lust existed.
Brooke had always accused me of being a closet romantic. And maybe she was right. As a scientist, believing in soulmates, love, and unbridled lust didn’t make much sense. But I couldn’t stop myself from wanting to believe it was real anyway.
It had happened for my twin, and Brooke deserved the love she had with Liam. Her capacity to care about other people was endless.
A sigh escaped from my mouth as I started reading the scene I’d left off on the last time I’d picked up the book.
It was hot.
It was sensual.
And even though the male hero was an obnoxious alpha sometimes, I adored the way he wanted to give his woman everything and protect her from anything bad in the world, and how incredibly devoted he was to the woman he loved.
“Hello, Jade,” a smooth baritone said from above me, the deep voice startling me so much I instinctively slammed the book closed.
Even though I loved steamy romance, I didn’t exactly broadcast it, except to my friends who read the same type of books.
Unfortunately, I’d gotten so lost in the hot fairy tale that I obviously hadn’t heard my first student arrive.
I shaded my eyes and looked up, curious because the voice was familiar, but I was pretty sure that since I lusted after Eli Stone, I was hearing that whiskey-smooth baritone voice only in my imagination.
My heart skittered as I focused in on the face belonging to the sexy male voice.
It was Eli Stone, and I gaped at him like an idiot because I couldn’t seem to reconcile him and being out in the middle of nowhere.
I scrambled to my feet, feeling at a disadvantage because I was so far below him. But the position change didn’t help all that much. I was average height, and Eli Stone was all muscle—broad, tall, and pretty damn intimidating, even though he was casually dressed in jeans, a T-shirt that only showed how ripped he was, and a pair of hiking boots.
For just a moment, my eyes were drawn to the dark scrolls and sharp angles of the tribal tattoo that covered his left arm, ending at his wrist. The markings were a stark black against his tanned skin, and the ferociousness of the design left me speechless.
I wasn’t into tats, and I’d seen Eli’s in images many times, but there was something about those markings that made my heart lodge in my throat. They were fierce, but for some reason they only made me feel . . . sadness.
“What are you doing here?” I finally asked hesitantly as my gaze went back to his face.
He folded his muscular arms in front of him as he answered, “You didn’t seem to want to come to me, so I’m coming to you. I’m your student for the next thirty-two hours or so, Jade.”
I might not have been fond of Eli Stone, but his presence was still a little bit overwhelming.
Okay, maybe more than a little bit.
It had been so long since I’d seen Eli in person that I’d started to tell myself that I’d overestimated the tension that had flowed between us in his office.
But I really hadn’t.
My body was taut just from being in close proximity to him, and the hypervigilant awareness I felt when I looked at him was very, very real.
The feelings were so powerful that I couldn’t focus on anything else but him.
I didn’t understand it.
But I was truly experiencing it.
The same awkward, potent attraction I’d fought in his office months ago.
I swallowed hard, my brain working to figure out exactly how I could get rid of Eli Stone before I made a complete and total fool of myself.

J.S. “Jan” Scott is the New York Times and USA Today bestselling author of numerous contemporary and paranormal romances, including The Sinclairs series. She’s an avid reader of all types of books and literature, but romance has always been her genre of choice—so she writes what she loves to read: stories that are almost always steamy, generally feature an alpha male, and have a happily ever after, because she just can’t seem to write them any other way! Jan loves to connect with readers.