A former military man now wages battles on the ice in this hockey-themed romance that brings him face-to-face with the widow of his former best friend in a sizzling story full of witty banter and doing whatever it takes to get to the truth.  Keep reading to get a tempting taste of Good Guy by Kate Meader, then add it to your bookshelf.  In honor of this first installment in the Rookie Rebels series make sure to fill out the form below for the chance to win a $25 Amazon GC too! He’s a Special Forces veteran making his pro hockey debut. She’s a dogged sports reporter determined to get a scoop. She’s also his best friend’s widow...
Fans can’t get enough of Levi Hunt, the Special Forces veteran who put his NHL career on hold to serve his country and fight the bad guys. So when his new Chicago Rebels bosses tell him to cooperate with the press on a profile, he’s ready to do his duty. Until he finds out who he has to work with: flame-haired, freckle-splashed, impossibly perky Jordan Cooke.
Also known as the woman he should not have kissed the night she buried her husband, Levi’s best friend in the service.
Hockey-stick-up-his-butt-serious Levi Hunt might despise Jordan for reasons she can’t fathom—okay, it’s to do with kissing—but her future in the cutthroat world of sports reporting hangs on delivering the goods on the league’s hottest, grumpiest rookie. So what if he’s not interested in having his life plated up for public consumption. Too bad. Jordan will have to play dirty to get her scoop and even dirtier to get her man. Only in winning the story, she might just lose her heart...

He needed to escape before he said or did something he’d regret, but he also needed her to be safe, which meant there was only one way this could proceed.
“I just hauled you out of there under the guise of doing this interview, so we—“
“Probably should keep up the pretense?”
“Correct.” He stalked toward the elevator bank, both relieved and on edge that she accompanied him.
“Were you headed to the bar to meet up with someone?”
“Just feeling restless in my room. Looking for company.”
“And I ruined it by making you think you needed to play target extraction.”
The elevator doors opened and when they closed again, he was inside and sharing the sultry air with Jordan. He pressed the button for the tenth floor. “You didn’t ruin it. Something else took precedence, is all.”
You.
In that moment, when he saw her, all thoughts of a night of dumb jokes with his crew dispersed to the outer limits of the Tri-State area. Sure, he noticed her discomfort with Stroger but even if he hadn’t, even if it had been Jordan in a room full of supermodels, there would have been no one else. Only her.
This was not controlling the narrative.
This was a fucking mess.
The elevator reached his floor and he stepped off, with her following.
Please. Fucking. No.
“Well, like I said, Levi, you didn’t have to rescue me.” She placed a hand on his arm and squeezed, probably intending to be friendly. Her touch flayed him. “I had it handled.”
He snapped. “Did you have it handled, Jordan? Because from what I can see you’re a beautiful woman forced to play nice with a bunch of jocks who probably think they have a shot with you.”
Her eyes flashed. “No one forces me to do anything. I do this job because I love it, and yeah, the guys I cover usually enjoy a laugh and a joke. Unlike some people who’d rather scowl everyone around them into the grave. But I know where the line is and I’ve no problem redrawing it when necessary.”
Fury shouldn’t have made her more attractive. It shouldn’t have given that wrinkle between her eyebrows new purpose or the lips he wanted to kiss a plumpness that made his mouth water. It shouldn’t have made her chest heave with effort, which only drew his attention to their lush swell and the hint of cleavage he wanted to explore.
“I’m not saying you don’t. I’m saying that guys in this environment tend to turn into entitled asses and wouldn’t know a line if it was steamrolled all over their faces. I don’t want you to be in any situation where you have to even think about the line. Case in point, maybe you shouldn’t be fondling Kershaw’s biceps!”
She did a double take. “Fondling?”
“Yes, fondling. You’re a journalist. Haven’t you heard of it?” Weak, man. So weak.
“Yeah, I’ve heard of it,” she said, a rasp to her voice. “It’s one of my favorite words, actually. Are you seriously jealous...of Theo?”
Yes. All the yes. “Of course not. But he’s a dumb kid, and I don’t want him to get the wrong idea.”
She was closer now, close enough to share a breath. To stumble headlong into her. To fall into madness. 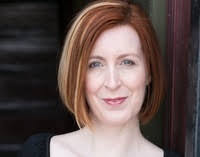 USA TODAY BESTSELLING AUTHOR
Originally from Ireland, Kate cut her romance reader teeth on Maeve Binchy and Jilly Cooper novels, with some Harlequins thrown in for variety. Give her tales about brooding mill owners, oversexed equestrians, and men who can rock an apron or a fire hose, and she's there. Now based in Chicago, she writes sexy contemporary romance with alpha heroes and strong heroines who can match their men quip for quip.