A young college hockey player on the verge of fame finds himself an unexpected father after a one night stand in this New Adult contemporary romance.  Keep reading to get a tempting glimpse of Snipe by Mary Morano, then start counting down the days until this second installment in the Mooseheads Hockey hits bookshelves on October 1st. 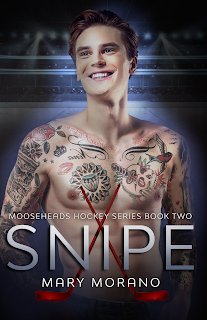 Serious relationships are NOT meant for College...
At least that’s what Justin believes. As a member of the Mooseheads Hockey Team, Justin is known for three things: Hats, Parties, and giving the best advice around.As he starts his junior year of college at Monroe University, he knows it will be the best one yet. Life is going great for Justin, until Becca stumbles her way in. When she tells him she’s pregnant after a drunken one night stand that neither can fully remember, he’s left with a choice. Will he step up and be the man they need him to be, or will he run away like his own parents did?This story is told from both Justin and Becca’s POV. It involves themed college parties, lots of different hats, and some interesting ideas for baby gifts.The Mooseheads Hockey Series is a set of standalone hockey romance books. They can be read separately, but may be better enjoyed in order. 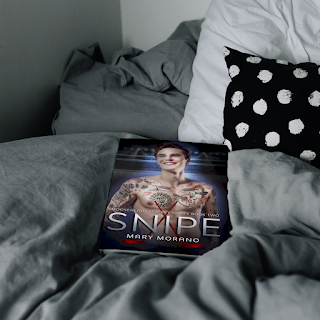 AUTHOR INFO:
Mary is a single mom who decided to take her own advice and follow her dreams of being an author. She's a New York Islanders Fan and can be often found driving her kids to one of their many sports activities. She enjoys reading, and watching Harry Potter, Avengers Movies, and SVU. You can find her on social media, and she would love to hear from you!
FACEBOOK  |  READER'S GROUP  |  INSTAGRAM  |  TIKTOK  |  GOODREADS AUTHOR PAGE  |  AMAZON AUTHOR PAGE  |  BOOKBUB
at August 20, 2021