As a fan of rockstar romances I've become drawn to this story, an angsty menage set in the world of music as fame and matters of the heart wage battle in the public eye.  Keep reading to get a tempting taste of Save Me by Ami Ackerman, along with getting my impressions of this first installment in the Boys In The Band series, then add it to your bookshelf! 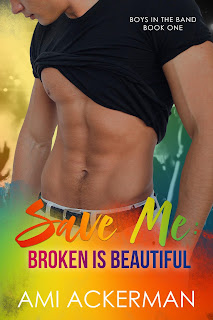 Kwan Park is one-of-seven in the world’s most successful boy band. Save Me has dominated the charts and Kwan thought he had it all – his band, the family they created, and the adoration of millions of fans.But soon he realizes something is missing. Love.
Enter bandmates, Benedict Ross and Bailey Montgomery, who might just hold the most precious thing in their hands – Kwan’s heart.Benedict and Kwan have a tarnished history, but Bailey offers both of them something deep and meaningful that neither of them have ever imagined.With all three hearts on the line, they must decide if they can handle the pressure...both from the label and those who wouldn’t understand.On music’s most prestigious night, Bene and Bailey ask Kwan to do the unthinkable – to go public with their relationship.Faced with betrayal and pain, Kwan, Bene and Bailey wonder if they’ll ever be anything but beautifully broken.****Save Me: Broken is Beautiful is intended for mature readers. Please be aware that there are topics that may be triggers for some readers. 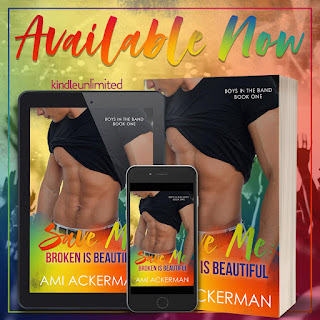 MY IMPRESSIONS OF THIS BOOK:
As a fan of rockstar romances I'm always on the lookout for new-to-me authors and their stories set in the music world.  With Save Me, Ms. Ackerman has created a sizzling story of bandmates (and friends) who find their connection growing stronger despite their painful pasts and the judgments of their fans and their record label.  With each turn of the page I became more and more invested in the journey of these three bandmates and their sizzling encounters both in and out of the bedroom.
While I often pictured BTS while reading this story, these characters quickly set themselves apart through vibrant personalities and backstories that pulled at my heartstrings.  As a band I found them engaging and look forward to the rest of the band having their story's told.  As for this triad, their connection felt natural from the very start and it had me rooting for them to overcome their bruised pasts and a future frowned upon by certain people.  Throughout this story Ms. Ackerman nicely balanced the depiction of this triad's painful pasts with the reality of what being together means in a tale that warmed my heart while putting a blush to my cheeks.  With each larger than life character finding a place in my heart I found myself drawn to each character in vastly different ways, ways that pushed all my emotional buttons.  Though certain elements of the rockstar world felt stereotypically depicted here, it was the emotional investment that set this story apart and has me highly recommending it while I hope that we return to this world again soon!
My rating for this is an A-
*I got this book from the author for review in exchange for my honest opinion.
AUTHOR INFO:
Ami Ackerman began reading romance at the age of ten when her aunt handed her a copy of Gone With the Wind and she was immediately hooked. Since then, she has always dreamed of writing romance full-time and decided to take a chance when her best friend gave her an idea. Ami believes in love across genders and sexes and that all relationships have a place in romance. When not writing at her favorite Starbucks, Ami can be found in the mountains of Arizona daydreaming about seven men in Korea who will never know she exists.
FACEBOOK READER GROUP  |  FACEBOOK AUTHOR PAGE  |  GOODREADS AUTHOR PAGE  |  INSTAGRAM
at August 30, 2021