As a disabled person myself I'm drawn to books dealing with this theme which is why I'm excited to introduce you to this new release.  Keep reading to get a tempting taste of Boldly by Elise Faber, along with getting my impressions of it, then add this second installment in the Breakers Hockey series to your bookshelf! 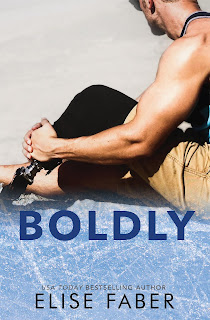 One second, he had everything.
The next, it was torn away.
Oliver James was at the peak of his career, captain of the Baltimore Breakers, minutes away from winning another Cup. Then one hit had derailed all that.
All he’d ever known was hockey, and he didn’t know where he fit in a world where playing was no longer a possibility. But then he was offered a chance to bring hockey back into his life. A shot at starting over.
The only condition of that second chance was required meetings with the team psychologist, Hazel.
She was exactly the kind of woman he might have once lusted after—beautiful, kind, a body that screamed sex. She made him feel whole, like a man again.
Except, she wasn’t interested in him outside of being a patient.
Well then, Oliver would just have to convince her otherwise.
BUY here. 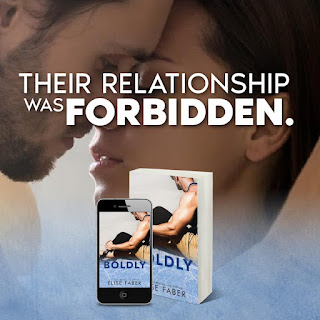 MY IMPRESSIONS OF THIS BOOK:
As a disabled person I'm always on the lookout for romances that depict the reality of our lives, the ups and downs of how we (and others) see ourselves when it comes to sexuality.  After reading numerous books by Ms. Faber she's become a favorite courtesy of her realistic characters and their unconventional romances.  From the older woman/younger man theme to the disabled patient/doctor storyline found here, Ms. Faber tells stories readers want to hear!
She pulled no punches in bringing Oliver James to the pages, realistically showing his less than perfect body and the emotional impact that has on his psyche as he finds himself attracted to the one woman he can't have.  Oliver's an immensely appealing hero, a good man inside and out who once thought that hockey defined him.  After losing his career, and his leg, he needs to redefine who he thinks he is and it made for a journey full of tears and heartache.  From a childhood of pain to his new reality of being disabled, Oliver's journey pushed every one of my emotional buttons before reaching his empowered HEA.  Through every emotional speed bump he triumphed, making sweet and sexy a delicious combination when it comes to his personality.  Hazel Reid had her own issues to deal with courtesy of a nasty ex who has left her self-esteem battered and bruised.  Though she met Oliver previously, their current situation has them interacting in much more personal ways as the attraction between them can no longer be ignored. Hazel's ex left her with many doubts about herself, doubts Oliver understands all too well in a connection fueled by their unwavering support of one another.  Through sweet and sexy interactions the romance between these two builds slowly but steadily, charming me every step of the way in a tale of starting over.
Oliver and Hazel are utterly perfect together as they build each other up after all the pain their pasts brought them.  Their romance was empowering and made me smile courtesy of sweet and playful dialogue while steaming up the pages with the reality of disability and sensuality being sensitively depicted.  Alongside this delightful main couple came a cast of equally likable secondary characters, teammates and family, who have me excited for more.  With its delightful epilogue full of heart and humor, and glimpses of the wonderfully entertaining Marcel, I can't wait for the next installment in the Breakers Hockey series to hit bookshelves!
My rating for this is an A.
*I got this book from the author for review in exchange for my honest opinion. 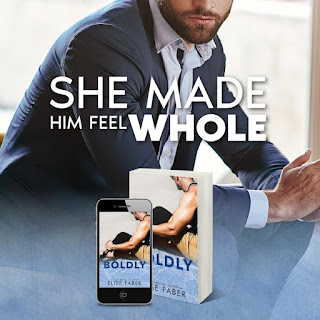 AUTHOR INFO:
USA Today bestselling author, Elise Faber, loves chocolate, Star Wars, Harry Potter, and hockey (the order depending on the day and how well her team -- the Sharks! -- are playing). She and her husband also play as much hockey as they can squeeze into their schedules, so much so that their typical date night is spent on the ice. Elise changes her hair color more often than some people change their socks, loves sparkly things, and is the mom to two exuberant boys.
She lives in Northern California. Connect with her in her Facebook group, the Fabinators or email her HERE.
WEBSITE  |  FACEBOOK  |  INSTAGRAM  |  TWITTER  |  NEWSLETTER  |  BOOKBUB
at August 31, 2021