Book Release Blitz for Give Me a Reason by A.L. Jackson (Review & GIVEAWAY)......

As a fan of Ms. Jackson's works I celebrate each new release.  Today I'm giving you a glimpse of her newly-released book which brings together a single dad, who's very rough around the edges, and a good woman looking to be a little bad.  Keep reading to get a tempting taste of Give Me a Reason by A.L. Jackson, along with getting my impressions of it, then add it to your bookshelf.  To celebrate the release of this book visit the link below for the chance to win a reader's prize pack too! 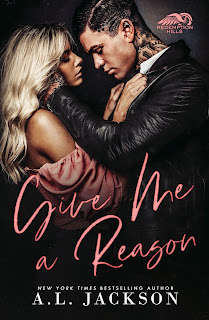 Eden Murphy came into my club looking to make some extra cash.A girl like her didn't belong in a place like this.She'd get ripped to shreds.Most likely by me.There's nothing but sweetness dripping from her sexy little body, and I'm the monster who's salivating to get a taste.Trent Lawson is the last man I should want.Dark.Dangerous.So wickedly gorgeous he makes my knees weak.He's also an arrogant jerk who happens to be my new boss.When I discover his adorable son is also in my kindergarten class, I know I have to keep my distance.But neither of us can ignore the attraction that flames. One glance, and our hearts race.One touch, and we’re aching for what we can’t have. One night, and we’re falling fast.Dragging her into my sordid world is wrong.It doesn’t matter. Eden Murphy is mine.
BUY ON AMAZON here.
AUDIO LIVE ALERT here.
GET A SIGNED PRINT COPY OF THIS BOOK here. 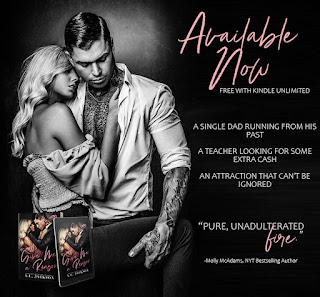 MY IMPRESSIONS OF THIS BOOK:
As a fan of MC-themed romances, this story grabbed me from the very start and never let go!  With its delicious hero, kindhearted heroine, and delightful secondary character (the charming child to the hero), I became quickly captivated by the action in and out of the bedroom along with the exhilarating suspense.  With each turn of the page I found myself falling even more for the drool-worthy hero and hoping he'll allow himself to claim his HEA as he so richly deserves it after showing himself to be more than what he shows the world.
Trent Lawson is a man who's lived a rough life as the son of a dangerous biker president, committed crimes he's not proud of, and taken lives and spilled blood in the name of necessity.  He knows he's not a good man, but behind his tough exterior is someone I was drawn to, someone deserving of HEA despite what he thinks.  The moment he meets good girl Eden is the moment he knows his life is going to get even more complicated as she becomes a sensual temptation too hard to ignore.  Despite all that makes them opposites, there's a delicious connection between these two that delightfully drives this story.  There's a slow burn between these two that builds in intensity as sensuality and suspense collide.  Throughout this story I found Trent a decadently delightful hero with charming and endearing interactions with his son which showed Trent wearing his heart on his sleeve.  His words and deeds during quiet times with Eden were poetic and romantic, but that didn't hide the dirty talking nature of this bad boy! He and Eden were combustible together and I enjoyed watching them grow closer together, dealing with their painful pasts full of lies and heartbreak, as a formidable pairing determined to embrace their HEA.
From the outside Eden Murphy exudes good girl vibes, but the moment she meets Trent is the moment she longs to be a bit bad.  Applying for a job to help her father brings her into Trent's world early on in the story and from there things turn unforgettable as these two opposites find an unwavering connection, a connection that's at war with his negative beliefs about himself and danger from their pasts creeping ever closer.  Add in the fact that she's his son's teacher and they find themselves growing even closer together, interacting as a family in ways that warmed my heart.  Eden's an immensely likable heroine, one who isn't who she seems to be as she's got a strong backbone and a lot of grit when showing Trent how perfect they are for each other.  Life hasn't been all sunshine and roses for her either in a tale that puts both of them through the emotional wringer before they're able to embrace their HEA.
From start to finish this was a captivating story with a romance full of heart and soul. The interactions between the hero and heroine were sizzling one moment while making me teary-eyed the next.  This couple fought for each other every step of the way while outside forces worked against them before throwing a jaw dropping act my way very late in the story that has me excited for the next installment.  On a whole this couple had me rooting for them after everything they'd been through before.  And with the addition of Trent's son, with his sweet nature and profound joy, it made this trio an unconventional family that I hope to see more glimpses of in future books!
My rating for this is an A.
*I got this book from the author for review in exchange for my honest opinion.

AUTHOR INFO:
A.L. Jackson is the New York Times & USA Today Bestselling author of contemporary romance. She writes emotional, sexy, heart-filled stories about boys who usually like to be a little bit bad.
Her bestselling series include THE REGRET SERIES, CLOSER TO YOU, BLEEDING STARS, FIGHT FOR ME, CONFESSIONS OF THE HEART, and FALLING STARS novels. Watch out for her upcoming stand-alone, GIVE ME A REASON, releasing August 30th!
If she’s not writing, you can find her hanging out by the pool with her family, sipping cocktails with her friends, or of course with her nose buried in a book.
Be sure not to miss new releases and sales from A.L. Jackson - Sign up to receive her newsletter HERE or text “aljackson” to 33222 to receive short but sweet updates on all the important news.
FACEBOOK  |  READER GROUP  |  AMAZON AUTHOR PAGE  |  BOOKBUB  |  TWITTER  |  INSTAGRAM
**********GIVEAWAY********** 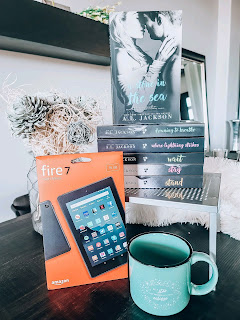 VISIT here FOR THE CHANCE TO WIN A KINDLE FIRE TABLET, A SIGNED SET OF THE BOOKS IN THE BLEEDING STARS SERIES, & A MUG!  GIVEAWAY ENDS SEPTEMBER 30TH!
at August 30, 2021