Cover Reveal for Better With You by Brit Benson (REVIEW)……

A love/hate relationship of former loves takes an unexpected turn in this tale of a fake relationship based on lies.  Keep reading to get a tempting taste of Better With You by Brit Benson, along with getting my impressions of this second installment in the Better Love series, then add it to your bookshelf! 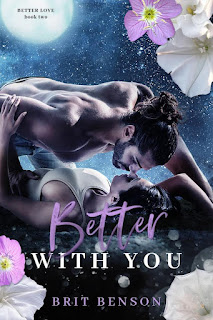 Riggs Stanton is a thief.
He’s also a liar, a jerk, and a playboy jock.Sure, I might have thought we had a connection.I might have thought he was worth breaking my “no dating” rule.He might have even given me the best orgasm I’ve ever experienced to date. But it was a farce.A trick.Another lie.And I don’t make mistakes twice.Now he says he needs me.One week of my help and I never have to deal with him again. For ten grand, I can suffer anything for seven days.Even Riggs Stanton.Except...The more time I spend with him, the more I get to know him, the more I question myself.What if what we shared before was real, and it’s everything else that’s fake? 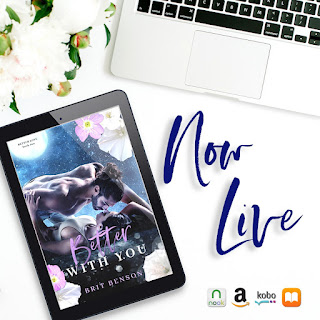 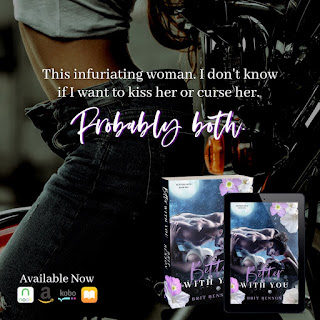 MY IMPRESSIONS OF THIS BOOK:
From the moment I picked up this book I was captivated!  From its appealing characters to a storyline that pulled at my heartstrings, this was a tale that pulled me along on a rollercoaster ride that wouldn't let me go.  From emotional heartache, to steamy encounters, to moments of laughter, this was an unforgettable tale and a decadently delightful read as lovers become enemies becoming lovers while looking for a second chance.
Bailey and Riggs have a crackling connection from the very start as these two apparent opposites found their way into each other's lives, found a bond through their painful pasts and through baking.  The time they spend together reveals hidden layers of their personalities while giving them the support they need to deal with their emotional baggage.  Theirs isn't an easy journey to HEA though as misunderstandings lead to a second chance that readers will be rooting for.  Riggs starts off as a cocky and arrogant baseball player but beneath that facade that he shows the world is Alex, the loving son who would give all to his mom.  He's not the proverbial mamas boy by any stretch of the imagination though as he's a talented dirty talker who once he commits to Bailey won't be swayed.  He's a good friend too, one who's not afraid to admit his love of baking, one who's secure in who he is except when it comes to his father's disappointment in him. That's something that hangs over him, affects his relationships with others, and it had my heart aching for him.  Riggs was a complex hero, a delicious one who I've now added to my list of Book Boyfriends.  He's not a perfect man, but he's perfect for Bailey and together they scorched up the pages.  Bailey's as immensely likable heroine, one I can easily see myself as a friend to.  She's a sassy young woman, a punk rock aficionado who's determined and tough as nails.  She's been hurt in the past too which has her building a wall around herself that only Alex seems to have been able to get through. While her relationship with him is a big part of the book, I also found much to cheer for regarding her and her friend Ivy's connection.  These two young women had a healthy, supportive, and caring connection that put a smile on my face for its realism and its handling of issues of mental health.  From a loving couple to likable friends this tale was everything I never knew I wanted in a romance.  With each turn of the page I juggled between a plethora of emotions while reaching for the occasional tissue to wipe away tears of sadness as well as of laughter!
On a whole this was a near-perfect read with an engaging main couple whose crackling connection led to sizzling encounters and witty banter that at times felt like foreplay. There was angst, emotional highs and lows, and secrets from the past that kept the future of Bailey and Riggs' relationship uncertain.  Their journey was a compelling one, one that gave readers all they could want and more.  Alongside this wonderful main couple were characters from the past that have me excited for the next installment.  The glimpses we got of Jesse were enticing and he promises to be another unforgettable hero from the talented Ms. Benson which now has me waiting for with bated breath.
My rating for this is an A.
*I got this book from the author for review in exchange for my honest opinion. 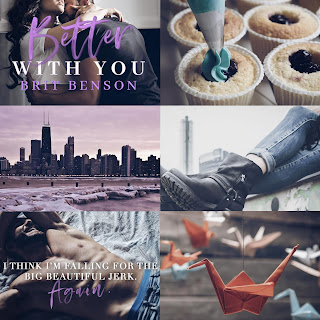 AUTHOR INFO:
Brit Benson writes romance novels that are sassy, sexy, and sweet.
When she’s not dreaming up her next swoony book boyfriend and fierce book bestie, she’s reading. When she’s not reading, she’s probably marathoning a Netflix series or wandering aimlessly up and down the aisles in Homegoods.
Brit currently resides somewhere near the Blue Ridge Parkway with her husband, daughters, and dogs.
WEBSITE  |  NEWSLETTER  |  FACEBOOK  |  INSTAGRAM  |  TIKTOK  |  PINTEREST  |  GOODREADS AUTHOR PAGE  |  AMAZON AUTHOR PAGE
at November 23, 2021