Book Tour for Breath to Bear by Paula Dombrowiak (REVIEW)……

As a fan of rockstar romances I'm thrilled to give you a tempting taste of this powerful tale involving the past and trying to move on from it as an older rockstar tells his story to the world while finding unexpected romance along the way.  Keep reading to get a tempting taste of Breath to Bear by Paula Dombrowiak that's releasing today, along with a glimpse of the previous installment in the Blood & Bone series, then get my impressions of this emotionally engaging series which will have you wanting to add these books to your bookshelf too! 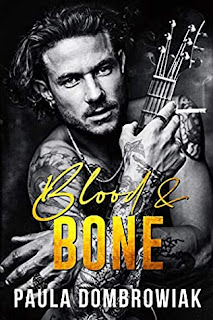 The world thought Jack O'Donnell was just another egocentric Rockstar, but they were wrong. So very wrong. How do I know this? I would be the one to tell his story.

It wasn't the clear blue of his eyes that held so much pain, or the well-defined forearms of a practiced guitar player that drew me in.

It was his story.

He told me I wouldn't be able to handle it, that I wouldn't like the ending. As I sit in a cold metal chair in the basement of a Catholic Church, I know he is right.

I am a journalist. Trained to get the story. He shouldn't be trusting me with the most vulnerable parts of himself.

He's a '90s rock legend, making the tabloids salivate for all the juicy tidbits of his life. He served it up to them with a messy divorce, a devastating loss, and the revolving door of his many rehab stints.

He is a beautiful disaster, his life a train wreck you can't look away from but there is more to Jack than just the headlines.

The problem is, I'm getting too close. Our connection is undeniable and our pasts colliding but he's still in love with someone else.

What happens when the interview is over?

One Interview
Two days.
Twenty-five years of Rock ‘n Roll.
★Dear Reader, this book contains some sensitive subjects that deal with suicide, addiction and abuse. Please take care while reading.
FIND AT GOODREADS here.
BUY here.
MY IMPRESSIONS OF THIS BOOK:
As a fan of rockstar romances I was immediately pulled into this tale that travels back and forth in the life of aged rockstar, Jack O'Donnell, taking readers from the lowest of lows to the highest of highs and back again.  It's a gritty story, one that pulls at the heartstrings, and is just the beginning of Jack's story as he slowly starts over after finding an unexpected connection to another.
Jack's story is a heartbreaking one from the very start as readers get to see the early stages of his life, a life of abuse at the hands of his father that led to him running away to LA to find fame.  Through it all music was a big part of his identity, and readers get to see how music made for many good moments and many bad ones in Jack's life.  Along with music was his friend and muse, Mia, a woman who came to mean the world to him and who led to one of his biggest heartbreaks.  She's not the only woman in his life as there's model Amber and her unexpected pregnancy that added daughter Hayley to his world too.  With each turn of the page readers discover a life full of angst, a life of addiction, a life of poor choices, all of which had me frustrated by Jack occasionally. From the outside Jack was all glitz and glamour, a rocker full of confidence, but behind that facade is a man teeming with vulnerabilities.  A man uncertain of himself and bruised by his painful past.  He's ultimately a man whose pain drew me to him and had me slowly falling for this imperfect man looking to right a lifetime of wrongs.
With a career that ran the gamut from success to break-up, readers will be quickly consumed by this rollercoaster ride of emotions, be engrossed in the realities of the music business, all while being impressed by this being Ms. Dombrowiak's debut novel. The emotions are heartbreaking at times, pulling at reader's heartstrings, in a tale where the women in his life have a profound effect on his journey.  Erin is the latest addition to his life, a journalist set to write his story who ends up finding a surprising romance with him that saw their instant crackling connection become a blazing fire by the end of the book.  His friends and bandmates, Wade and Cash, are also there beside him, have seen him at his best and worst, and I truly hope their stories get told more fully too.  On a whole this was a powerful read with a realistic hero on an unforgettable journey that kept me on the edge of my seat.  The ending left plenty for readers to ponder which has me excited for the next installment in this series!
My rating for this is an A-
*I got this book from the author for review in exchange for my honest opinion. 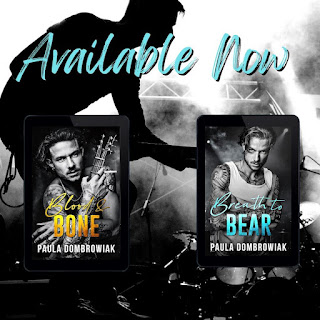 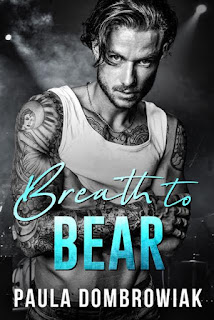 BREATH TO BEAR (Blood & Bone #2)
These chains that weigh me down, my guilt I wear like a crown, SHE is my Breath to Bear
Jack O’Donnell
I thought telling my story would purge my demons, but it didn’t. If anything, it brought them closer to the surface.
Now, they’re threatening to drag me back into the darkness and stop me from moving on with the journalist who captured my story and my heart.
The guilt I bear is heavy, the road I’ve traveled long and littered with scars that run deep. I’ve been down this road before, in love with two women at the same time.
It didn’t end well.
Erin’s running scared - for good reason - but I won’t let her get away that easy.
Am I strong enough to get rid of the ghosts from my past in order to have a future with Erin?
Erin Langford
Journalists are supposed to be objective, to look at a story as if you’re outside a window looking in. That’s what I was taught.
That’s what I should have done.
Instead, I fell through the glass and right into Jack O’Donnell’s bed.
The memoire I was supposed to write turned into more than I bargained for. I’m in too deep.
So far gone.
He’s like a bad drug, making his way through my veins, and stopping my heart. Yet, I still want more.
There’s just one problem - he’s still in love with someone else. She’s the ghost in the room, the girl that ruined him for all others.
Am I strong enough to be the one to help him heal?
*This book is not a standalone. You will need to read Blood and Bone in order to fully enjoy Breath to Bear
FIND AT GOODREADS here.
BUY here.
MY IMPRESSIONS OF THIS BOOK:
After reading the previous book in this series I knew I had to finish the epic tale started there.  This one picks up right where the other left off with Jack and Erin working on his autobiography, trying to deal with past pains to make a future HEA.  This book has Jack and Erin trying to put all the broken pieces of Jack back together, moving on from his past instead of letting it weigh him down.  All the emotional pain seen in the previous book is once again on display, tissues will definitely be needed, as Jack is redeemed in reader's eyes.  He previously was often seen as an arrogant rocker, but here you can't help but hurt with him, can't help but see the bruised little boy behind the man.  I was drawn to him completely throughout this story, cheering him on as he worked through his past, making amends in a journey that was unforgettable.  Erin too showed a different side to herself here, a stronger side that knew what she wanted and went after it.  Erin's an immensely appealing heroine, one more fully fleshed-out than before in a journey that puts readers through the emotional wringer.  Just when you think you know where things are going, fate pulls characters in another direction.  The push/pull, the twists and turns, all make for an epic journey to HEA that I am honored to recommend to others!
My rating for this is an A.
*I got this book from the author for review in exchange for my honest opinion. 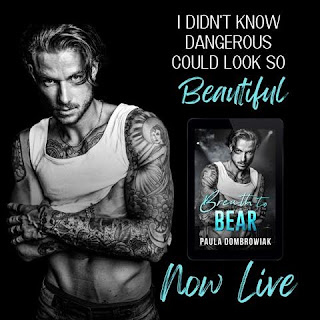 AUTHOR INFO:
I grew up in the suburbs of Chicago, right on beautiful Lake Michigan. The Chicago lakeshore is my favorite place in the whole world. I currently live in Arizona.
I'm a '90s girl but love discovering new bands, just as much as I love writing. So why not combine the two? That was how Blood and Bone, my debut novel, was born.
I am a sucker for a redeemable villain, bad boys and the tragically flawed.
My wardrobe consists of band T-shirts and leggings that are perpetually covered in pet hair. Animals are my homies and I don't eat my homies.
Music inspires my storytelling.
Have you always dreamed of being a Rock Star? Well now you can be. Join my Reader Group and be a Rock Star too.
VISIT MS. DOMBROWIAK here.
at November 30, 2021