A football player finds an unexpected connection to his incarcerated brother's ex in this emotionally intense sports-fueled romance of opposites attracting.  Keep reading to get a tempting taste of The Final Play by Amie Knight, along with getting my impressions of this third installment in the Summerville Sports series, then add it to your bookshelf! 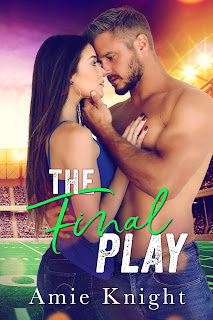 As a professional linebacker, I lived and breathed football.The only thing I loved as much as the game was my twin brother, Max, who kept me almost as busy cleaning up his messes.
The most recent of which landed him behind bars.So, it shouldn’t have surprised me when a beautiful woman showed up on my doorstep, claiming to be pregnant with Max’s baby.Glory was unexpected, infuriating, and flat-out crazy most of the time.But no matter how hard I tried to deny it, that tiny spitfire slammed into my boring life with the strength of a Category 5 hurricane, blowing through my defenses until she’d carved her name in my heart—permanently.I feared we would never work. She was a single mom, my brother’s ex, and one more chance for me to fail yet another person I loved.But if football was my church, then Glory was my heaven.
EXCERPT:
He was the best man I’d ever known and I couldn’t have him. I probably didn’t deserve him, anyway.
Tears flooded my eyes and I paid the cashier as fast as possible before practically running behind the buggy to get to my car. I loaded the groceries, tears trailing my cheeks.
I didn’t even bother to wipe them away. This whole situation was sad. It deserved my tears. Every damn one of them. Because Mason and Glory could never be.
It would be weird and wrong. What the hell would we even tell people? How would we explain? And how would Max feel? I had a feeling it wasn’t good at all.
I climbed into the front seat of my car and held on to my steering wheel for dear life. And sobbed. And then when I was done sobbing , I beat the shit out of that steering wheel and then the dashboard.
Because life wasn’t fair. It just fucking wasn’t and again and again it just kept throwing me punch after punch. How long was I supposed to still stay standing?
I felt like this might be the final punch and it was a knockout. Because I had a feeling that Mason Stark was my person. And I couldn’t even have him.
FIND AT GOODREADS here.
BUY LINKS:  AMAZON (US)  |  AMAZON (Worldwide)  |  AMAZON (Paperback)  |  AMAZON (Hardcover) 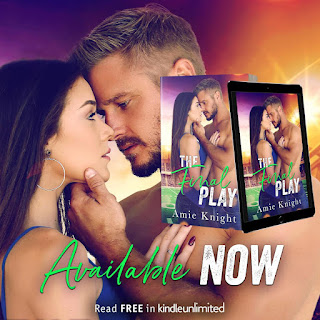 MY IMPRESSIONS OF THIS BOOK:
I'm not normally a fan of stories involving surprise pregnancies but the unexpected pregnancy that brings together the two lead characters of this story makes this a heartwarming tale full of heart and soul.  Set in the world of football this romance had strong emotional depth courtesy of words and deeds that pulled at my heartstrings, charming me while making me smile.
Mason Stark has been a part of this series from the very beginning and it's been a worthwhile wait for him to finally take center stage with the release of this book.  The opening chapter lays the groundwork for the kind of man he is and the emotions revolving around what happened was a gut punch that endeared him to me from that moment on.  Mason has always lived his life around playing football, after a childhood tragedy that left him reeling.  For his twin brother Max though, it was drugs and poor decisions that he relied on.  Mason did all he could throughout the years to help Max, but in the end Max ended up in jail.  Despite his brother's criminality, Mason still feels obligated for Max.  So when a pregnant woman shows up on his doorstep claiming Max is the father of her son, Mason gives her a home and a place in his heart in a slow-burn romance full of sexual tension.  Mason's a truly wonderful hero, a man with a big heart and a protective soul.  He always tries to do what's right, tries to be the best man he can be, so his bringing Glory into his home felt natural.  Their journey from friends to lovers felt natural too.  Glory, and her baby, were the family he'd always longed for and he made his feelings for her quite obvious in a relationship that utterly charmed me as things progressed between them.
Glory Tolson's a smart and sassy heroine, an admirable woman who's currently pregnant and alone with no good options in sight.  Hoping to find baby daddy Max she instead finds Mason, and while she's grateful for his help and support, she plans on things remaining platonic between them.  But the heart wants what the heart wants in a connection that she fought early on before finally (thankfully) giving in to as this newfound family lit up the pages.
This was a delightful and endearing read from the first page to the last!  Mason's a truly heroic hero both in words and deeds as he stepped up yet again in the face of being needed.  He's a big, brawny man with an equally big heart whose joy over his nephew's arrival brought a tear to my eye.  Early on he accepted his growing feelings for Glory but he never pushed her too far as he was a true gentleman...when he wasn't busy being a masterful dirty talker that is.  I thoroughly enjoyed this dichotomy though and it made me like him all the more.  By the turn of the final page I was left completely satisfied by this beautifully wrapped up story, courtesy of its compelling characters and sweet and sexy banter between the main couple.  Everything came full circle for the characters in a story that's forever found a place in my heart!
My rating for this is an A.
*I got this book from the author for review in exchange for my honest opinion. 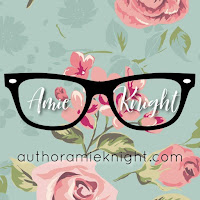 AUTHOR INFO:
Amie Knight has been a reader for as long as she could remember and a romance lover since she could get her hands on her momma's books. A dedicated wife and mother with a love of music and makeup, she won’t ever be seen leaving the house without her eyebrows and eyelashes done just right. When she isn't reading and writing, you can catch her jamming out in the car with her two kids to '90s R&B, country, and showtunes. Amie draws inspiration from her childhood in Columbia, South Carolina, and can't imagine living anywhere other than the South.
FACEBOOK  |  TWITTER  |  INSTAGRAM  |  GOODREADS AUTHOR PAGE  |  WEBSITE
at February 04, 2022