Book Blast for The Most Eligible Bride in London by Ella Quinn (GIVEAWAY)….

A man trying to make amends for his scandalous past finds himself drawn to the one woman he might never be able to attain in this Regency romance of second chances that will take readers from the dangerous and dreary parts of London to the glitz of its ballrooms.  Keep reading to get a tempting taste of The Most Eligible Bride in London by Ella Quinn, then learn even more about this book by visiting the other sites hosting this tour.  In honor of this third installment in the The Lords of London series make sure to fill out the form below for the chance to win a $20 bookstore GC too! 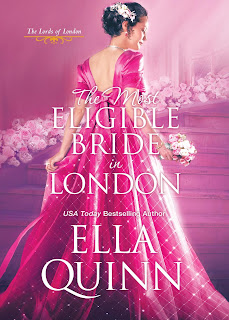 Love conquers even the most unlikely lord in USA Today bestselling author Ella Quinn’s delightful Lords of London series, as a reformed rogue endeavors to prove himself worthy of his chosen bride...
Mistakes happen, to be sure. Rarely are those mistakes as unfortunate as the one made by Nathanael, Viscount Fotherby, when he abducted the now Lady Merton to save his friend from marriage. Nate has been trying to make amends ever since, leaving behind his self-centered ways to fulfill his duties—and that includes finding a wife of his own. One woman sparks his interest above all others—a lady he helped when she was rescuing a child. Alas, there is a devilish complication...Miss Henrietta Stern, Lady Merton’s younger sister, is intrigued by the stranger who comes to her aid—until she learns his identity. Nate’s stunt could have ruined her sister’s reputation, and her family may never forgive him. With beauty, connections, and a sizeable dowry, Henrietta has plenty of admirers. Yet no other suitor quickens her pulse quite like Nate does. Her heart insists that the gentleman has changed for the better. But can a renowned scoundrel possibly prove himself to be the perfect husband?
EXCERPT:
Nate glanced back over his shoulder, but the lady’s coach was already turning around. When she’d first faced him with her brows imperiously raised, he’d thought she was Dotty Stern, but that was impossible. Miss Stern had married the Marquis of Merton shortly after Nate had left Town four years before. Surely Merton would not allow his wife to engage in that type of activity. Also, the lady looked like Miss Stern had four years ago.
Whoever she was, she was beautiful. Her hair was as black as night, and her eyes appeared as if they might be light. But what struck him most was her courage. He’d never met a female who had so little fear of using a weapon to shoot a man. Yet even though she was a lady—a fact that had been clear once she’d abandoned her country accent—she was not dressed like a female who would be attending the Season. The cloth was good enough, but the styling was not that of a London modiste. At one time, when he’d been a well-known dandy, those things had actually mattered to him. He was still able to recognize the differences, but he didn’t care about them anymore. Now, he was much more interested in the person instead of the way they dressed.
Yet, because he was a gentleman and she was a lady, he could not insult her by introducing himself. That was unfortunate.
He hoped the infant lived. Most babes would have given a loud screech when tossed. This one had only a small, pathetic cry.
Her carriage traveled up the street at a smart pace, and he went around to the door of his coach and found Mr. Odell, the young woman, and her child already inside. “I see you are ready to leave.”
“We are.” Odell’s smile was wider than Nate had ever seen it as he gazed at the infant in his arms. “Mary has agreed to be our daughter, just as if she and John had wed.”
Mary’s tears were gone and she too was smiling broadly. “From now on I am Mary Odell.”
“What is the child’s name?” Nate climbed into the coach.
“John for his father. Papa”—she looked shyly at Mr. Odell—“said that he was to have the same rights as if John and I had married.”
That did not surprise Nate at all. Odell and his wife had several daughters, all of whom had married well, and one remaining son. The younger son was studying to be a lawyer and had taken little interest in the farm. And there were no entailments to stop Odell and his wife from leaving the property as they wished.
Today had definitely been a good day. Nate returned her smile. “I’m glad to hear it.”
“Papa”—Nate was pleased to see how comfortable she was calling Odell “Papa.” But she would have known them fairly well. Nate briefly wondered why she hadn’t gone to the Odells in the first place, but not only was it water under the bridge, it wasn’t his business —“told me how hard you looked for me,” Mary said as the coach started. “If I live to be a hundred, I don’t think I’ll find a lord as good as you are.”
A flush heated Nate’s neck. “Thank you. I’m glad I was able to help.” The coach had turned and was headed back up the street. “Mrs. Odell should be at Fotherby House by now.” He decided to ask a question that had been bothering him. “How did you survive?”
“My, my.” She straightened her shoulders. “Mr. Bywater made me leave. But my mother gave me all the money she had been able to save, and I got work sewing. But after the baby came…”
“Well”—Odell’s voice was rough with emotion—“at least you had the sense to go to the workhouse. That’s the only way we found you.”
“Yes.” Her tone was barely above a whisper. “It was really my only choice.”
Nate and the older man exchanged a glance. They were both glad she thought that way. Too many young women and girls on their own were forced into prostitution.

AUTHOR INFO:
USA Today bestselling author Ella Quinn's studies and other jobs have always been on the serious side (political science professor and lawyer). Reading historical romances, especially Regencies, were her escape. Eventually her love of historical novels led her to start writing them.
She is married to her wonderful husband of over forty years. They have a son and two beautiful granddaughters, a Great Dane named Lilibet, and a cat named Winnie. After living in the South Pacific, Central America, North Africa, England and Europe, she and her husband decided to make their dreams come true and lived on a sailboat for three years. After cruising the Caribbean and North America, she completed a transatlantic crossing from St. Martin to Southern Europe. She's currently living in Germany, happily writing while her husband is back at work, recovering from retirement. She expects to be back on the boat in 2022.
Ella loves when readers connect with her.
WEBSITE  |  FACEBOOK  |  TWITTER  |  GOODREADS AUTHOR PAGE  |  BOOKBUB  |  AMAZON AUTHOR PAGE
**********GIVEAWAY**********
a Rafflecopter giveaway
at February 23, 2022