Fans of rockstar romances rejoice with the release of this slightly angsty tale of second chances and instant attraction.  Keep reading to get a tempting taste of Between Flaming Stars by Hayley Faiman, along with getting my impressions of this steamy read, then add this first installment in the Offspring Legends series to your bookshelf! 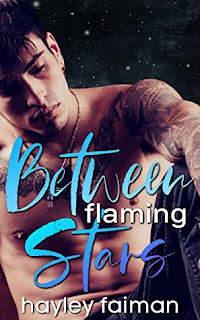 Can your deepest fantasies turn into reality?
Lennon June was thirteen when she met Memphis Dixon the first time. With stars in her eyes, she dreamt a girl's dream about what it would be like to be his.Memphis Dixon is a rock star. He’s the lead singer of the band, Between Flaming Stars.He was also in a miserable relationship for over a decade.He’s drowned his troubles in alcohol, drugs, and pills for as long as he can remember. He’s now clean and seeing life through brand new lenses.When their eyes meet from across the room, it’s as if everyone else in the world vanishes.She makes his heart race.He’s a dream come true.Can they work or will their worlds collide? MY IMPRESSIONS OF THIS BOOK:
I absolutely adore rockstar romances and look forward to each new release with this theme.  This latest entry into the genre, that I just turned the final page of, is a thoroughly satisfying series starter that I breezed through with a smile on my face.  Though there's much about it that's familiar, the appeal of the main couple shines through throughout their sweet and sensual journey to HEA, keeping me frantically turning the pages while rooting for them every step of the way.
Lennon (Linden) June has had a crush on bad boy rocker Memphis since she was a young girl.  After years of temptation, and years of dreaming about what could be, she has a second chance encounter with him as a 23 year old fashion designer that changes both of their lives irrevocably.  Linden's a likable heroine, one who's not blinded by fame. She's down to earth with a kind and caring heart, the kind of woman Memphis needs after ten years of toxicity from his ex Eliana.  Memphis Dixon's the quintessential rockstar, one who spent ten years weighed down by addiction while putting up with the crumbs of affection his ex occasionally doled out.  Older and wiser, he's now clean and sober, single after ridding himself of the fame-hungry Eliana.  He's a new man after his time in rehab, one who smiles and laughs, and I found myself utterly charmed by him. Though he's sworn off women he can't help but be drawn to Linden and I became quickly consumed by their romance.
From the first page to the last this was a fast-paced romance full of steamy encounters and sweet moments of togetherness, along with a bit of angst courtesy of the annoying meddling of Eliana (who came back like a bad rash).  But true love prevails in this series starter set in the rockstar world, a series that I hope to see more of after seeing the glimpses of playfulness and brotherly interactions between the bandmates of Between Flaming Stars.
My rating for this is an A-
*I got this book from the author for review in exchange for my honest opinion.
AUTHOR INFO:
I was born and raised in California. My husband and I met when I was just 16. We were married a few years later, we lived in Oregon while he was in the US Coast Guard.
Texas is now where we call home, where our boots rest, and where we're raising our two little boys and a chocolate lab named Optimus Prime.
WEBSITE  |  NEWSLETTER  |  FACEBOOK  |  INSTAGRAM  |  TWITTER  |  AMAZON AUTHOR PAGE
at February 04, 2022