Book Release Blitz for The Rocker by Harlow Layne (REVIEW)…..

As a fan of rockstar romances I'm thrilled to find another addition to the genre with this forbidden romance full of sexual tension.  Keep reading to get a tempting taste of The Rocker by Harlow Layne, along with getting my impressions of this fifth installment in the Love Is Blind series, then add it to your bookshelf! 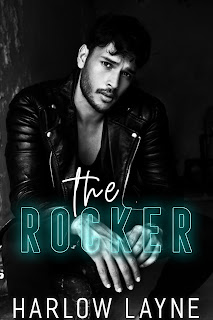 The moment I saw her, I knew she’d be mine.
The only problem is she’s my band’s manager, and if we get caught, she loses her job.
I only wanted one night with her. One night to fuck her out of my system and be done with her.
The only problem is after one taste of Pen, I’m addicted. I can’t get enough of her, and she’s pushing me away.
She says what we had is a lapse in judgement, but I have to disagree. It’s the most sane thing I’ve ever done, and I’ll do anything to get her back underneath me, beside me, and to make her mine even if that means ruining what I’ve worked so hard to build up. 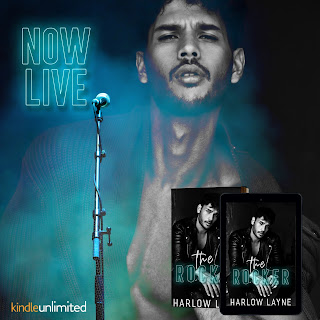 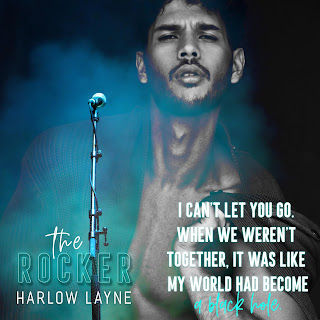 MY IMPRESSIONS OF THIS BOOK:
I can never get enough of reading rockstar romances which is why I was immediately drawn to this story the moment I read the blurb.  Add in a forbidden romance involving an older woman who's managing the band, and the younger male lead singer, and you end up with an entertaining story full of sexual tension and angst.
Penelope is a woman working in a predominantly male world, becoming manager to an up and coming band named Crimson Heat.  The moment she sees the band she knows they're destined for stardom, but it's the lead singer who most captures her attention in an instant connection that crackles.  Things don't go smoothly for the two of them though as she's worried about her career, scared of other's judgements, which had them hiding the truth of their connection from their friends, the band, and the media while on tour.  Pen's a tough and self-assured woman when it comes to her job, but when it comes to the personal part of her she's not as confident which added a heavy layer of angst to the story.  While her fears, and the push and pull between them, has been seen before I still found her concerns relatable and was rooting for her to embrace the HEA that her sexy young rockstar's more than obviously offering her. Together they're a formidable pair with a sizzling connection that can't be denied!
When it comes to rockstars, Walker's a delicious addition to the slew of sexy rockers I've read about throughout the years.  He may be young in years but he's wise when it comes to knowing what he wants.  And what he wants is a relationship, a future, with Pen.  After a scorching first encounter he knows that once isn't enough and sets out to claim the woman desperately trying to fight their more than obvious connection. Walker's had a difficult past but he's risen above it to be a sweet and caring soul.  He oozes tons of sexiness though too and is a master at dirty talk that made his interludes with Pen even more decadently delightful.  On a whole he's the quintessential rockstar and I swooned over him with each turn of the page.
This was a very satisfying read, though it was familiar in many ways.  I enjoyed the forbidden aspect of Pen and Walker's pairing and the extra sizzle and sexual tension it brought to their journey.  Their connection was sweet and sexy, yet teeming with angst courtesy of Pen's fears, that sometimes frustrated me but kept me glued to the pages. Alongside this likable main couple were a cast of equally likable secondary characters. From Pen's group of female friends whose support made me smile, to the brotherly and playful exchanges between Walker and his bandmates, their appearances enriched this story and have me wanting to go back to learn more about these characters while I wait with high hopes for the rest of Crimson Heat to take center stage.
My rating for this is a B+
*I got this book from the author for review in exchange for my honest opinion. 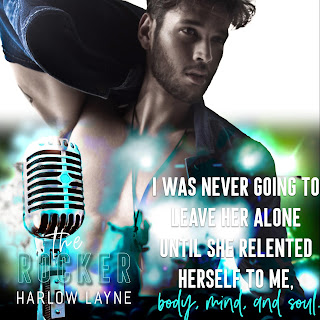 AUTHOR INFO:
Indie Author. Romance Writer. Reader. Mom. Wife. Dog Lover. Addicted to all things Happily Ever After and Amazon.
Harlow Layne is a hopeless romantic who is known for her contemporary writing style of beautiful slow-burn,
sweet, sexy, and swoon-worthy alphas and fast pace, super steamy romance in her Love is Blind series.
Harlow wrote fan fiction for years before she decided to try her hand at a story that had been swimming in her head for years.
When Harlow's not writing you'll find her online shopping on Amazon, Facebook, or Instagram, reading, or hanging out with her family and two dogs.
NEWSLETTER  |  FACEBOOK  |  TWITTER |  INSTAGRAM  |  GOODREADS AUTHOR PAGE  |  BOOKBUB  |  AMAZON AUTHOR PAGE  |  WEBSITE
at February 17, 2022