Book Release Blast for Dear Heart, I Hate You by Eliah Greenwood (REVIEW)…..

A job house sitting leads to lots of flirty banter and tons of sexual tension as an emotionally bruised basketball player ends up at war with his new roommate.  Keep reading to get a tempting taste of Dear Heart, I Hate You by Eliah Greenwood, along with getting my impressions of this angsty second installment in the Easton High series, which will have you wanting to add it to your bookshelf! 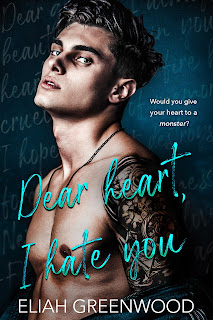 It all started with an ad.
"House sitter needed for the summer, room and board provided.”Guess I missed the part about the cocky basketball player sleeping down the hall...Finn Richards is hot, cruel, broken beyond repair. Oh, and did I mention hell-bent on making me quit?Whatever. It's not like his charms work on me. I’m immune to his deep hazel eyes, and I'm not even a little bit curious about what happened that night...It’s just two months.I can definitely go two months without ripping his head off.
Only problem is,I’m not sure the same goes for his clothes.
BUY LINKS:  AMAZON (US)  |  AMAZON (UK)  |  AMAZON (AU)  |  AMAZON (CA) 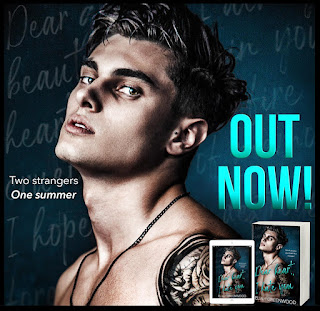 MY IMPRESSIONS OF THIS BOOK:
Told in dual POVs, this angsty tale of enemies to lovers captivated me from the first page to the last courtesy of a broken and bruised hero and the strong-willed woman who looks beyond his antagonistic exterior in an effort to help him move on from his painful past.  Having just finished reading it I'm left an emotional mess after a gut wrenching cliffhanger that has me waiting with bated breath to see it resolved.  Until that unexpected cliffhanger, Ms. Greenwood had pulled every one of my emotional strings, making me fall for a hero who was clearly hurting but who relished hurting others first.  Pairing him with a sassy and kind hearted heroine was just what he needed to heal and together they undertook a flirty journey to romance full of heartbreaking moments as well as steamy encounters.  By the turn of the final page I had become fully invested in Finn and Dia, rooting for them every step of the way, and am now left feeling emotionally bruised while I wait to see where their journey takes them next.
When readers first meet Finn Richards they see an angry young man, hiding the pain of a childhood trauma behind a crude and uncaring exterior.  He's a bit hard to like early on as he lashes out quickly and cleanly, wounding others before they have a chance to make him feel...something...anything.  He's a disappointment to his father, a man who shows more pride in Finn's friend than in Finn himself, which has Finn doing all he can to earn that disappointment.  In the past, he's always been able to put people in their place, but the moment he meets Diamond he knows he's met his match and together they scorch up the pages while unleashing all sorts of emotions.  With each turn of the page we get more and more insight into this broken young man, finding him endearing while wanting to hug all his pain away.  He's a flawed hero for sure, but he's one who I fell for completely and who I look forward to seeing more of in the conclusion of this story.
Diamond Mitchell has her own painful past as a child of the foster care system before being adopted as a baby by a gay couple.  She never knew her mother and had to deal with bullying growing up as a multiethnic young woman with two dads.  She never let the hurtful words break her though and it's made her the kind of heroine you can't help but admire. When readers first meet her they see a strong-willed young woman, someone with a kind and caring heart who's more than capable of giving as good as she gets.  The more Finn tries to push her away the more determined she is to help him realize his self-worth, helping him put his heart on the line to be with her in a romance that pushed every single one of my emotional buttons.
This was a captivating romance that flew by in the blink of an eye courtesy of an unforgettable main couple and their flirty banter teeming with sexual tension.  Verbal foreplay, alongside longing glances, kept me glued to their romance while I waited impatiently for them to finally give into the more than obvious connection brewing between them.  Along with this memorable main couple was an equally entertaining cast of secondary characters, characters with personal issues of their own that added an even more intense level of emotions.  From Dia's adopted brother Jesse, to Finn's friends Theo and Xavier, to Finn's lovable dog Lexie, this was a story that pulled me in and hasn't let go of me yet as I wait with an entire box of tissues for the conclusion of this story to hit bookshelves!
My rating for this is an A.
*I got this book from the author for review in exchange for my honest opinion. 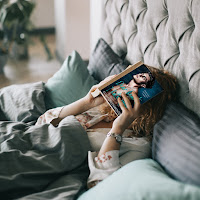 AUTHOR INFO:
Eliah Greenwood is a Canadian author, proud Wattpad Star, Fiction Awards 2018 Winner, coffee addict and cliché with a twist lover!
She started her writing journey on a website called Wattpad at the age of fifteen. She wrote the majority of her first book Unwritten Rules on the bus on her way home from school. When her debut gathered 31,000,000 reads on the platform, she decided to self-publish the trilogy that set so many hearts, including hers, on fire.
When she's not writing and screaming at her computer screen, you can find her binge watching her favorite TV shows on repeat or reading in a warm blanket. She is currently working on her fifth book. It is expected to come out in 2021.
NEWSLETTER  |  INSTAGRAM  |  TWITTER  |  FACEBOOK  |  WEBSITE
at February 11, 2022