Book Tour for Love You Like That by Scarlett Cole (REVIEW)……

A bet between a Plain Jane drummer whose dream of music fame left her behind, and a drummer at the height of fame and adored by women, is the start to a surprising romance between friends who slowly become something much more.  Keep reading to get a tempting glimpse of Love You Like That by Scarlett Cole, along with getting my impressions of this fourth installment in the Excess All Areas series, then add it to your bookshelf! 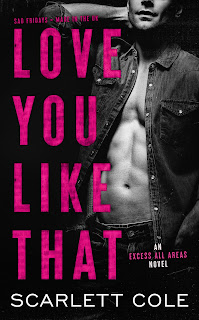 Zoe Atkins wanted exactly one thing. To be the world’s greatest percussionist. Instead, she’s on a tour bus engaged in a stupid bet with rock star, Alex King, trying to fill the hole left behind when her dream gave up on her.The prickly former percussionist wasn’t supposed to steal his heart. With her distrust of lipstick and love of men’s pyjamas, she was everything playboy, Alex, didn’t want in a lover. At least, that’s what he thought when he bet her he could find her a hook up during their tour. Until he’s forced to watch the woman he’s come to desire leave the bar with her perfect guy, taking a piece of his already bruised and battered heart with her.
Now it’s up to the Sad Fridays’ rocker to use his passionate powers of persuasion to convince Zoe he’s more than her wingman. He’s her everything. 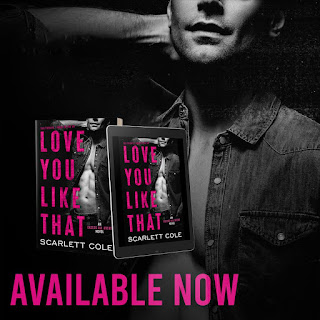 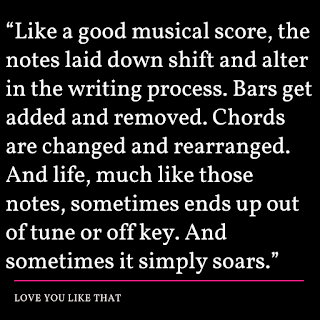 MY IMPRESSIONS OF THIS BOOK:
Through the previous three books in the Excess All Areas series I've come to think of the members and crew of Sad Fridays as family.  I've become captivated by their lives and have felt every emotion of theirs as if they were my own.  This latest installment is yet another winner with its delightful banter, heartfelt emotions, and a main couple who's immensely likable as they evolve from friends into lovers.  It's a romance that pulls you in from the very start, never letting go as I'm still thinking of this story long after the final page was turned.
Alex King is the drummer for the up and coming band Sad Fridays, a sexy and charming man who's unapologetic about his sexuality while living life to the fullest.  He's pansexual, a unique quality not seen in many romance novels, so for him it's feelings and emotions that guide him to his partners...not their gender.  When readers first see him they see a carefree, flirtatious rockstar, a larger than life man full of fun and charm.  Being around his friend Zoe though brings out deeper layers to the bold and brash man just looking for love and acceptance after having his heart broken many times in the past.  He was someone I desperately wanted to see happy as he was such a loving and caring man and his connection to Zoe was all he needed and deserved.
Zoe Atkins is a complicated character, one whose life journey I could relate to as the issues facing her because of her becoming deaf are ones I've experienced as a quadriplegic.  Among the many brilliant facets of this story is in fact Ms. Cole's handling of Zoe's disability, the physical as well as the emotional changes she's experiencing as a drummer losing their hearing.  Ms. Cole's clearly done a lot of research on the subject which she presents in a respectful manner that pulls readers into Zoe's life.  When readers first meet Zoe she's a bit lost but is brave in the face of her uncertainties and pushes on through all the self-doubts.  After all, without music who is she and what does it mean for her future?  All she needs is someone to REALLY hear her and that someone is Alex.  Their connection might start with a bet that has Alex acting as her wingman to find her a man, but it's not long before he realizes he's the perfect man for her.
The connection between Alex and Zoe is a special one!  It's sizzling yet sweet, moments of bdsm balanced with moments of tender words and deeds, it's a smorgasbord of hearts and souls.  Theirs is a romance of more than just friends to lovers, it's a romance of one heart to another, a journey of heartfelt talks where communication is vital.  Theirs is an unforgettable journey that I feel honored to have been a part of and I look forward to where Ms. Cole will take us next.  Though you can read this book on its own, it's a much richer experience reading the previous books first.  You get to see the journey of Sad Fridays from the very beginning.  You get to know the bandmates, and their significant others, and become fully immersed in their lives as every up and down pulls at your heartstrings.  Getting to see these characters again was like coming home, especially Nan.  Nan is wise with an outspokenness that makes me smile and I would love to see her get her own story.  With the way the second epilogue ended I'm now left waiting with bated breath for what happens next in a series that's nearly flawless and that I highly recommend.
My rating for this is an A+
*I got this book from the author for review in exchange for my honest opinion. 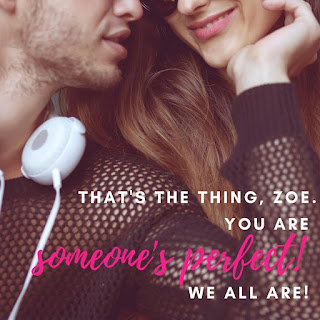 AUTHOR INFO:
The tattoo across my right hip says it all really. A Life Less Ordinary. Inked by the amazingly talented Luke Wessman at the Wooster Street Social Club (a.k.a. New York Ink). Why is it important? Well, it sums up my view on life. That we should all aspire to live a life that is less boring, less predictable. Be bold, and do something amazing. I’ve made some crazy choices. I’ve been a car maker, a consultant, and even a senior executive at a large retailer running strategy. Born in England, spent time in the U.S. and Japan, before ending up in Canada where I met my own, personal hero – all six and a half feet of him. Both of us are scorpios! Yeah, I know! Should have checked the astrological signs earlier, but somehow it works for us. We have two amazing kids, who I either could never part with or could easily be convinced to sell on e-bay.
I’ve wanted to be a writer for a really long time. Check through my office cupboards or my computer and you’ll find half written stories and character descriptions everywhere. Now I'm getting the chance to follow that dream.
I am represented by Beth Phelan at The Bent Agency, NY.
WEBSITE  |  NEWSLETTER  |  FACEBOOK  |  AMAZON AUTHOR PAGE  |  GOODREADS AUTHOR PAGE  |  INSTAGRAM  |  TWITTER  |  BOOKBUB
at May 17, 2022