Readers will find yet another sexy, tattooed, and drool-worthy hero courtesy of Ms. Savage and her older woman/younger man romance of a single mom and the determined man used to getting what he wants as they travel down a rocky road to HEA. Keep reading to get a tempting taste of Hanson by Kat Savage, along with my impressions of it, then add this fourth installment in the Men of Bird's Eye series to your bookshelf too! 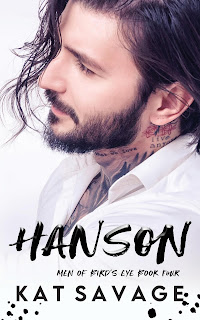 Hanson Serrano is a complicated man—even his therapist tries to convince him to put his trust in someone. But the youngest member of the Bird’s Eye crew isn’t too concerned. He’s got no plans to settle down anytime soon.
That is, until he runs into Thea James—literally. One nasty spill on the sidewalk later, and this brooding Brazilian can’t take his eyes off her fiery red curls and curvy backside. Though, the interaction makes it clear he’ll have to work for this one.
Thea James is looking for something very specific—and Hanson Serrano isn’t it. Nevermind the fact that he’s tattooed from neck to toe, but he’s also much younger than her. She’s been down the bad boy road before and all she has to show for it is her single mom status and an ex that makes her life miserable.
When Thea finally agrees to one date in an effort to halt Hanson’s chase, she’s pleasantly surprised when he pulls out all the stops. In fact, it’s the best date she’s ever been on.
The pair eventually get tangled up—in their feelings and between the sheets. But between Hanson’s walls, Thea’s ex, and a nagging age gap, their blooming relationship feels like a shipwreck waiting to happen.
As the couple navigates this ocean of obstacles, will they give up and abandon ship or find a way to get in the lifeboat and row together? 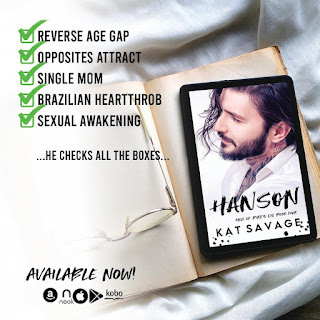 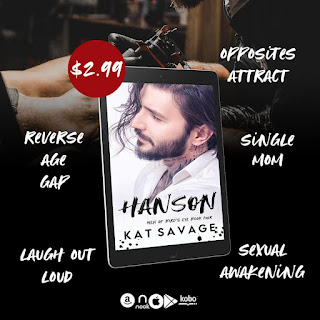 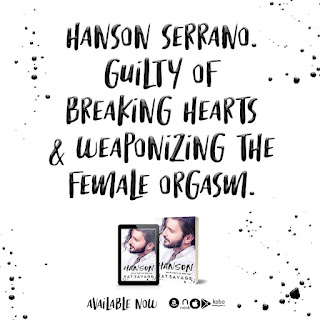 MY IMPRESSIONS OF THIS BOOK:
Well folks, that's all she wrote!  And what a delight this series has been throughout these four books!  With each turn of the page, readers discovered a supportive and unconventional family of sexy tattoo artists with painful pasts that made for rocky roads to HEA.  Hanson gives us much of the same in a charming and sizzling read with a bit of angst, and a lot of heart and soul, that put a smile on my face.
From the moment readers were first introduced to Hanson Serrano they saw a quiet and reserved young man.  They saw a man judged by others for all his tattoos but who doesn't care as he lives life for himself and those he cares about.  There's also been an air of mystery surrounding him, a mystery of a painful past that still weighs on him today and has him claiming the men and women of the Bird's Eye Crew as his family. These people mean everything to him and he'd do anything for them in interactions that warmed my heart and made me fall even further in love with him.  The day he meets single mom Thea James is a life-altering moment for him with a sizzling instant attraction that has him working hard to win her over.  Hanson's a wonderful hero, one who exudes energy, one with a big heart very much on display as he works to convince Thea that their younger man/older woman relationship can work.  In slow and sizzling interactions he shows her what HEA will look like if she just gives them a chance.
Thea James is a teacher and single mom, a woman with a nasty ex who's trying to date but who finds herself immediately attracted to the younger tattooed man who's been picking up his niece daily...while trying to pick her up too.  Thea's an immensely likable heroine, one who's just the person Hanson needs to share his painful past with.  She's a mama bear too when it comes to her young son Ethan and the two of them are a heartwarming addition to the Bird's Eye family.
On a whole this was a quick read with a lot of heart and soul.  Hanson and Thea were both sweet and sizzling together in a romance that I was invested in from the very beginning.  Add in Ethan and you have the most amazing unconventional family...and the most satisfying end to a series!  The men of the Bird's Eye crew may look rough and tough, but they have big hearts that will pull you in from the very first page to the last!
My rating for this is an A.
*I got this book from the author for review in exchange for my honest opinion. 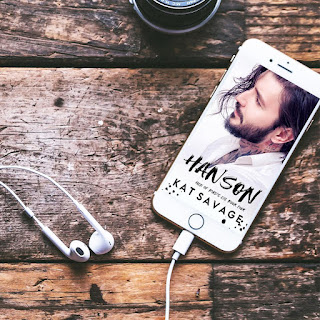 AUTHOR INFO:
Kat Savage resides in Louisville, Kentucky with her three beautiful children, her hunky spouse, and two spoiled dogs. She secretly has hope of getting chickens one day.
By day, she’s an office manager, pushing paperwork and daydreaming. When she’s not at her nine-to-five, she’s writing. Or thinking about writing. Or preparing books and book stuff. Or quite possibly, designing stuff for other people’s books.
She was driven to writing out of a need for distraction and self-preservation after the death of her sister in 2013. Since then, it’s snowballed into a full blown passion she can’t escape. Even on the toughest days, she wouldn’t want to.
She writes poetry packed with real, raw, and sometimes ugly truths. She won’t lie. Her goal is to make you ache, in that perfect delicious way we often secretly crave.
Shortly after putting her poetry and prose out into the world, she turned to novel writing. Savage is a natural storyteller, getting better with each book. She tries to give the characters in her novels depth, whether they’re serious or comical, she builds them in layers with the hope that you see a little of yourself in some of them.
WEBSITE  |  NEWSLETTER  |  FACEBOOK  |  FACEBOOK READERS GROUP  |  TWITTER  |  INSTAGRAM  | GOODREADS AUTHOR PAGE  |  AMAZON AUTHOR PAGE  |  BOOKBUB
at May 26, 2022