Book Blast for Daughter of Light by Eileen Dreyer (GIVEAWAY)…….

Opposites attract in this paranormal romance of the unexpected connection between a fairy on a mission and a mortal struggling to keep from losing his home.  Keep reading to get a tempting taste of Daughter of Light by Eileen Dreyer, then learn even more about this book by visiting the other sites hosting this tour.  In honor of this second installment in the Daughters of Myth series make sure to fill out the form below for the chance to win a $20 bookstore GC too! 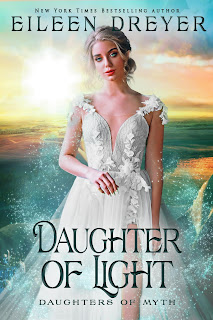 He’s had enough...
Harry Wyatt, Earl of Hartley has enough problems trying to keep his estate solvent. What he does not need is yet another lost child showing up on his land looking for the Hartley Fairy Diamond made famous by a recent film. A fairy diamond that is no more than myth handed down by delusional ancestors and responsible for the perilous state of his finances. And yet there is something about this latest visitor, something beside her delicate beauty and troubling familiarity. Something that is compelling him to go against everything he believes to help her. To want her.She’s on a quest...Sorcha, daughter of Mab Queen of Fairies is on a quest. Dropped into a cold, alien world, it is her task to recover the great fairy stone that has been lost to the land of mortals, a stone whose absence has upended the balance of nature. If she doesn’t get the stone back, spring will not come. But there is a handsome mortal standing in her way. A mortal she is drawn to like no other man, fairy or mortal. A mortal who claims he doesn’t believe in her, but whose memories and fears say otherwise. A mortal with green fairy eyes. A mortal she could love, if only he weren’t mortal and she fairy.
*This title was previously published as Dark Seduction.
EXCERPT:
Harry saw the confusion in the young woman’s eyes and huffed in frustration. It wasn’t enough that he had another of those damn movie freaks wandering his property. He had one who thought she was actually participating in the film, like a fairy version of a Renaissance Fair. Reality? What is reality? No, no, I’d prefer to live in a fantasy world like the people in the movie.
Well, damn the movie. He wasn’t putting up with it a moment more. Not even when he still couldn’t quite pull himself away from the heart-stopping kiss they’d just shared. All right, then. The kiss he’d just taken.
It hadn’t meant a thing. Surprise. Sudden human contact out on the edge of the moors. A hit on the head. God knows he’d bounced enough down that bloody hill. He’d been stunned. Nothing more. Nothing.
“Did you say it’s, what? Winter?” she asked, looking around.
Bloody hell.
He sighed. “Yes. For another four months.”
She stood there, wide-eyed and silent, the rain dripping off those blond curls. Then she looked around. “This is what it looks like without spring?”
She sounded absolutely lost. How could that hurt him? He was probably coming down with pneumonia and already delirious.
“November comes every year, lass,” he said, pulling off his jacket and wrapping the shivering girl in it. “Right on schedule.”
“But spring won’t come,” she said back. “Not unless I recover the Stone.”
That brought him to a dead stop. “Don’t,” he growled, finger in her face. “There is no stone. No fairy diamond. It was a movie, damn it! And no bloody fairies! Fairies don't exist. They never existed, damn it!”
“But of course they do,” she assured him in the most musical voice he’d ever heard as she stood there letting him drape her in his oversize coat. And then, bloody hell if she didn’t smile as if she’d just discovered gold. “Aren’t you the living proof of it, now?”
It was his eyes, green like spring grass in sunlight. Fairy eyes. 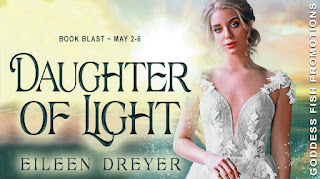 AUTHOR INFO:
New York Times bestselling author and RWA Hall of Fame member Eileen Dreyer and her evil twin Kathleen Korbel have published over forty novels and novellas, and ten short stories in genres ranging from medical suspense to paranormal to romance. She is thrilled to have joined Oliver Heber Books to continue her Drake’s Rakes series about Regency aristocrats who are willing to sacrifice everything to keep their country safe, of which Ill Met by Moonlight is a near relative.
A former trauma nurse, Eileen lives in St. Louis with her husband, children and large and noisy Irish family, of which she is the reluctant matriarch. A seasoned conference speaker, Dreyer travels to research, and uses research as an excuse to travel. Oh, who's she kidding? She doesn't need an excuse. She has the Irish wanderlust and satisfies it as often as she can to the point that she has sung traditional Irish music on four continents. She also had the incredible chance to research Drake’s Rakes by attending the 200th anniversary of not only the Battle of Waterloo, but the Duchess of Richmond ball (in period attire). She has animals, but refuses to subject them to the limelight.
WEBSITE  |  FACEBOOK AUTHOR PAGE
**********GIVEAWAY**********
a Rafflecopter giveaway
at May 02, 2022