Review for Rivals for Love by Eve Vaughn 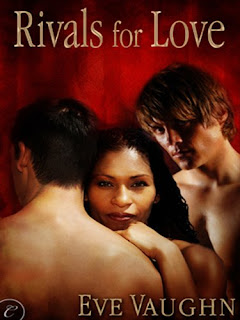 Hayden thought she'd found the man of her dreams until the day Sawyer vanished without a trace.  Immediately there to pick up the pieces was his long-time rival Luc who loved her from afar for a very long time.  Starting out as friends they soon become lovers and even though Luc wants them to take that ultimate step, something keeps holding Hayden back.  She loves Luc, but visions of her time with Sawyer keep intruding.  She never stopped loving him and when he suddenly re-enters the picture, she's even more troubled by her feelings.  Will she ultimately choose one of them or will she give into her darkest desires and form a family of three?  The journey to that answer is full of steamy interludes, heartbreaking encounters, catfights, and male egos fighting it out.

I find menage stories to be very intriguing since an author has to work very hard to make them believable.  There has to be a compelling reason, a set of strong emotions, that makes a group of three into a family.  This story does a very good job at showing why Hayden is drawn to both men.  Both men are alpha and easily flex their muscles when in each other presence.  It was like watching two dogs fighting over a bone.  There's a lot of history between Luc and Sawyer from their teen years when they constantly tried to outdo each other and all those emotions add an interesting layer to the story.

For me, it's the men that make this an enjoyable story.  Their feelings of possession and how they acted on those feelings were humorous and sexy at the same time.  Both men have family baggage that affects the image they present.  It's led to the anger they've carried for each other all these years and only by talking it through do they actually have a breakthrough.  And yes, they actually do talk it out and by spending time together they end up bringing out more likable qualities in each other.  They're both sexy, strong-willed, and willing to do anything to make Hayden happy.  I could easily understand being torn between those two hunks.

I wasn't as enamored with Hayden though.  Her character felt drab and unexciting on her own.  It's only in the presence of the men that she got interesting.  She was a bit meek in my opinion and could've reached her happy ending much faster just by being honest.  She was portrayed as being the most caring person and yet I didn't think she treated Luc or Sawyer fairly.  By not speaking up, it felt like she was cheating on each man.  That added to me not liking her as much.  I didn't find her worthy of either man because of her emotional weakness and felt that the story would've been better with a stronger heroine.

All-in-all I enjoyed this story, and it's mostly due to the men.  They were the mature individuals in this relationship and it was through their sacrifices that a resolution comes about.