Book Tour for Faking It by Christine d'Abo (Review & GIVEAWAY)

Readers once again get to meet the men devoted to rebuilding their childhood gym as they deal with chaotic lives and loves in this erotically-charged m/m romance.  Keep reading to get a tempting glimpse of Faking It by Christine d'Abo, along with hearing from the author herself in describing her compelling main characters.  You'll also get my impressions of this book with it's romance based on a fake engagement and can then learn even more about it by visiting the other sites hosting this tour.  In honor of this second installment in the Ringside Romance series make sure to leave a comment below telling me what your favorite romance trope is for the chance to win a $25 Riptide Publishing GC too!

Hello, my name is Christine d’Abo and I’m so happy to be here today.
I’m a firm believer that the good friends are the family members that we get to choose. The get us on a level that sometimes our biological family doesn’t. When I came up with the idea of Ringside Gym and the men who were involved with it, I wanted to make sure that their relationships reflected that feeling.
Max would be the “middle” child of the trio of heroes. He’s my peacemaker, the one who wants to make sure everyone and everything is okay. But Max has a problem – he doesn’t know what to do when he’s not needed. Zack no longer needs him now that he has Noland in his life, and their other friend Eli has been MIA due to his MMA career. Max’s life begins to drift and he questions not only what he wants, but also who he wants in it.
When Grady Barnes shows up on the scene, Max is equal parts intrigued and annoyed. Here is a man who seems to have it all, but is seemingly at the whim of his father.  When Grady asks Max for help, he takes a leap of faith and agrees. What Max doesn’t anticipate is how quickly Grady will work his way into his heart.
All Max needs to do is find a way to prevent Grady from being forced into a marriage he doesn’t want, while not giving in to his impulse to sweep Grady into his arm.
Simple, right? 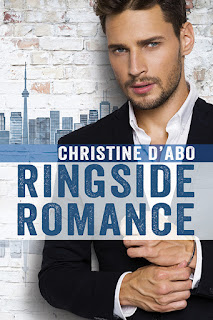 Max Tremblay should be happy. His nightclub, Frantic, is one of the most popular gay clubs in Toronto, and his childhood refuge, Ringside Gym, is well on the way to reopening. But when he finds yet another drunk in the alley beside the bar, Max isn’t sure this is the life he truly wants.
Grady Barnes has it all. He’s rich, famous, and wants for nothing. Well, nothing but a good relationship with his father. When he discovers that his father is going to force him into an arranged marriage, Grady has had enough. He tracks down Max, the man who got him to safety after a night of overindulgence, and makes him a proposal: pretend to be his fiancé for two weeks and he’ll invest in Ringside Gym.
When the pair travel to Vancouver to attend a family wedding, the flames of their mutual attraction ignite, and they discover that the only difference between pretend and reality is how well they can fake it.

*****GET MORE INSIGHT INTO THIS BOOK AT RIPTIDE PUBLISHING*****
MY IMPRESSIONS OF THIS BOOK:
Daddy issues are at the heart of the internal conflicts weighing on both of the main characters in this charming and erotically-charged m/m romance.  Add in a difference in social status and readers will find themselves quickly caught up in this angsty tale of self-discovery that has me looking forward to a return visit to this colorful and supportive group of men from the Ringside Gym.

Grady Barnes is a mess.  He's the stereotypical poor little rich boy who has no idea what to do with his life.  He's full of anger towards his father and happy to goad him at every turn as his father is overly controlling and treats him as a constant disappointment.  When a drunken alleyway encounter introduces him to Max Tremblay though his life will be forever altered.  With his father's latest plan to sell him off in marriage to a fellow businessman's son, Grady hatches his own plan of a fake engagement to the only man to make his heart race...Max...which takes both of them down a rocky road towards HEA.  It's a bumpy road as money becomes an issue along with self-doubts, but it's ultimately a journey well-worth taking as it all leads to an ending that put a smile on my face.  Grady was a bit arrogant and self-involved at the start but flashes of a kind heart and loads of charm kept me from hating him.  He truly wanted to make Max happy and spared no expense in spoiling him.  His constant goading of his father and self-destructive behaviors were frustrating but clearly were a reflection of the hurt he's felt ever since his mother's death. To truly find HEA though he'll have to grow up, trust in himself, and let himself be loved for who he is instead of what his money can do for others.

Max Tremblay's a truly good man, kind to others, and devoted to work.  He's a good son too, but has a rocky relationship with his father that started when he was young.  He has a great group of friends and a successful business, but is starting to feel as if he's in a rut.  His life revolves around his bar and the gym that's always been a safe place for him which leaves no time for romance. Seeing a young man getting sick in his bar's alleyway might not seem like an ideal start to a relationship but it is a memorable one that changes him and his life irrevocably.  His first impression of Grady is one of annoyance but the next day he's charmed and feeling protective when he agrees to play his fake fiancee to thwart Grady's father.  Close quarters leads to lots of scorching encounters but also lots of pampering from Grady, which he's unaccustomed to, but which brings them closer together.  Long talks also leads to harsh truths as more outside manipulations leads to heartbreak and a showdown between fathers and sons.  Max is clearly a caretaker, always there for others at the expense of himself.  He's lonely though, seeing his friend's happiness as a couple, and is starting to want that for himself...picturing Grady more and more as his real other half.  To get him though Grady will have to finally stand up for himself which makes their hard-fought HEA all the richer.

This was a quick read with a cute premise.  The daddy issues, particularly those between Grady and his father, loom large and go a bit over-the-top at times but it does give this couple a feeling of solidarity despite all their other differences. Max is the more mature of the two, more sensible and grounded, and I enjoyed the fun and spontaneous side Grady was able to bring out in him.  In turn Grady morphed from flighty and self-doubting into someone more self-assured and willing to sacrifice everything for the man he loved.  There was a nice balance between scorching encounters in the bedroom and heartfelt talks outside of it which allowed them to make a believable connection.  Grady's father was truly vile and over-dramatic in his edicts that he became a perfect caricature of how to be a villain.  Grady's handler, Justin, was also immensely unlikable early on but redeemed himself at the end and became a true friend to Grady which has me wanting to know more about him and if he finds his own HEA after devoting so many years to the unappreciative Grady.  I especially loved seeing Zack and Nolan from the previous installment in this series as they're a cute couple whose friendship with Max makes for a unique definition of family as they push and support each other towards HEA.  On a whole this was a satisfying tale with a couple who overcame a lot of emotional baggage to become stronger men and a very happy couple and I look forward to the return of famous fighter Eli as he gets knocked out by love. 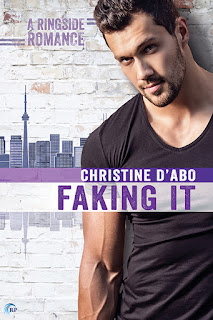 Deep in the heart of Toronto lies Ringside Gym. Once a safe haven for troubled teens, Ringside has gone derelict, a forgotten memory of past days. Until a group of friends set out to do what they can to bring life back to the ring and create a new home for LGBT youths.
But when their lives threaten to pull down their dreams, each man must turn to others to help make it a reality. Winners take all—but there are no losers in love.

A romance novelist and short story writer, Christine has over thirty publications to her name. She loves to exercise and stops writing just long enough to keep her body in motion too. When she’s not pretending to be a ninja in her basement, she’s most likely spending time with her family and two dogs.

PRIZE IS A $25 RIPTIDE PUBLISHING GC!

-GIVEAWAY IS OPEN TO EVERYONE.
-To be entered, LEAVE A COMMENT TELLING US YOUR FAVORITE ROMANTIC TROPE (ALONG WITH YOUR EMAIL ADDY).  NO EMAIL ADDY=NO ENTRY.
-To increase your chances of winning, comment at each of the stops on this tour.
-Winner will be chosen randomly from each valid comment left along the tour.
-GIVEAWAY ENDS AT MIDNIGHT EST ON MAY 13TH.
at May 11, 2017