Book Spotlight on The Outlaw’s Daughter by Margaret Brownley (GIVEAWAY)

A woman who grew up in a family of outlaws finds herself drawn to a man of law which complicates her future in this historical romance full of hard truths, hopes, and dreams.  Keep reading to get a tempting taste of The Outlaw’s Daughter by Margaret Brownley, then add it to your bookshelf when it releases on May 26th.  In honor of this third installment in the Haywire Brides series make sure to fill out the form below for the chance to win 1 of 5 sets of the first two books in this series too! 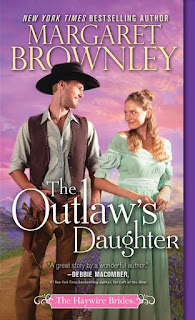 He may be a Texas Ranger but he only has eyes for the outlaw’s beautiful daughter...
Texas Ranger Matt Taggert is on the trail of a wanted man. He has good reason to believe that Ellie-May’s late husband was involved in a stagecoach robbery, and he’s here to see justice done. But when he arrives in town, he discovers the thief has become a local hero...and his beautiful young widow isn’t too happy to see some lawman out to tarnish her family’s newly spotless reputation.
Ellie-May’s shaken by her encounter with the Ranger. Having grown up an outlaw’s daughter, she’ll do anything to keep her children safe—and if that means hardening her heart against the handsome lawman’s smiles, then so be it. Because she knows Matt isn’t about to give up his search. He’s out to redeem himself and find proof that Ellie-May’s husband wasn’t the saint everyone claims...even if it means losing the love neither expected to discover along the way.

Haywire, Texas
1887
“Hold it right there, mister!”
Matt Taggert froze in place. The woman’s voice sounded serious, as did the metallic click announcing she was armed. Not wanting to alarm her, he held his hands out where they could be seen and turned to face her, taking it nice and easylike.
The owner of the voice stood at the entrance of the barn, the sun behind her back. The woman was small in stature but nonetheless looked like she meant business. Least her shotgun sure enough did.
Loosely braided hair the color of silken corn fell from beneath a floppy felt hat. Keen blue eyes looked him up and down, stopping momentarily to study the Colt hanging from his side and the badge on his leather vest. Apparently, nothing she saw relieved her mind as her weapon remained pointed at his chest.
“You can put your shotgun down, ma’am,” he said. “I mean you no harm.”
Matt’s assurances won him no favor, and the shotgun didn’t budge. “What are you doing, snooping ’round my property?” she demanded.
“Name’s Taggert. Matt Taggert, Texas Ranger,” he said. When even his name and profession didn’t convince her to lower her weapon, he added, “I’m looking for Neal Blackwell. I knocked on the door of the house, but there was no answer. Thought maybe I’d find him here in the barn.”
“Well, you thought wrong, mister.”
He studied the woman with narrowed eyes. “If you don’t mind my asking, ma’am, who am I speaking to?”
“I’m Mrs. Blackwell.”
“Mrs.—” That was a surprise. If her husband did indeed rob a stage, he sure in blazes hadn’t spent any of the stolen loot on his wife. Her sinewy body looked like it had been shaped by hard work and even harder times. If that wasn’t bad enough, her dress had enough patches to shingle a roof. The scuffed leather boots showing beneath the frayed hem of her skirt fared no better.
Nor did the animals in the barn, which included one skinny milk cow and a swaybacked mare.
Nevertheless, the woman earned his begrudging respect. Despite her shabby attire, she held herself with a quiet dignity that seemed at odds with her circumstances. He sensed that her squared shoulders stemmed from hard-earned inner strength.
“I need to talk to your husband,” he said.
Some emotion he couldn’t decipher flickered across her face. “Well, you won’t find him here.”
“If you’ll kindly tell me where I can find him, I’ll be on my way.”
Suspicion clouded her eyes, and he could almost see the cogwheels turning in her head. “What business does a Texas Ranger have with Neal?”
Before he could answer, a boy no older than five or six appeared by her side and tugged on her apron. “Mama?”
Dressed in knee pants and a checkered red shirt, the child peered at Matt from beneath a black slouch hat. A handsome lad, he had his mother’s blond hair and big blue eyes. He also matched his mother’s determined demeanor.
Matt grimaced. He hadn’t counted on Blackwell being a family man. Nothing worse than having to arrest a man in front of his children. It was bad enough cuffing one in the presence of his wife. But if Blackwell couldn’t answer Matt’s questions, arresting him was a real possibility.
The woman’s stance didn’t waver, but her voice softened as she addressed her son. “Go back to the house, Lionel. Mama’s busy right now.”
Before leaving, the boy looked Matt up and down, curiosity written on his little round face. “Is he a bad man, Mama?”
“Let’s hope for his sake he’s not,” his mama replied. “Now, go.”
Lionel’s face grew more solemn as his probing eyes met Matt’s. Matt winked in hopes of relieving the boy’s mind, but the stoic look remained. Never had Matt seen a child so young look so serious.
“Go,” his mother repeated, and this time Lionel left without further ado.
Mrs. Blackwell gave her shotgun a shake as if to remind Matt she meant business. “You still haven’t told me what you want with Neal.”
Matt couldn’t think of a tactful way to explain his business, so he came right out with it. “I need to talk to him about a stage robbery that took place last year.”
Her gaze sharpened. “Why?”
Partly because of the shotgun and partly because something about the woman brought out his protective instincts, Matt chose his next words with care. “I have reason to believe your husband has...certain information that would be helpful in my investigation.”
She discounted his explanation with a toss of her head. “Why would you think such a thing?”
“I’m not at liberty to say, ma’am. Least not till I talk to your husband.”
Her blue eyes narrowed. “If you think Neal had anything to do with that robbery, then you’re barking up the wrong tree.”
“That may be true,” he said slowly. “But I still need to talk to him. It’s the only way I can wrap up my business and—“
“You’ll wrap up your business a whole lot quicker if you just leave now.”
Matt drew in his breath. If she were a man, things would be easier. For one thing, a man would have been disarmed by now. He would have seen to that. After letting his outlaw brother escape, Matt couldn’t afford another blunder. Not if he wanted to keep his job. Still, he wasn’t about to use physical force on a woman. Not unless he had to.
“I’m sorry, ma’am.” He ever so slowly lowered his hands to his side. “I can’t leave. Not till I talk to your husband.”
“That’s gonna be a little hard to do,” she said with a wag of her shotgun. He arched an eyebrow. “Why is that?”
“Well, mister, it’s like this. My husband, Neal, is dead.”

New York Times bestselling author Margaret Brownley has penned more than forty-five novels and novellas. She's a two-time Romance Writers of American RITA® finalist and has written for a TV soap. She is also a recipient of the Romantic Times Pioneer Award. She makes her home in Southern California. Visit her online at margaret-brownley.com.