A woman of wealth finds her life in danger, unexpectedly becoming reliant on a man she meets while on vacation, with them soon forming a bond in this paranormal romance.  Keep reading to get a tempting taste of Night of the Billionaire Wolf by Terry Spear, then start counting down the days until this book hits shelves on May 26th.  In honor of this third installment in the Billionaire Wolf series make sure to fill out the form below for the chance to win 1 of 5 sets of the first two books in this series too! 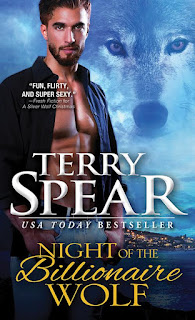 It’s not easy being a billionaire, a wolf shifter, and a woman...
Lexi Summerfield built her business from the ground up. But with great wealth comes great responsibility, and some drawbacks Lexi could not have anticipated. Lexi never knows who she can trust... Even on vacation, Lexi has a hard time trying to relax. And for good reason—the paparazzi are dogging her, and so is someone else with evil intent.
Then Lexi meets bodyguard and gray wolf shifter Ryder Gallagher, who’s also vacationing at Redwood National Park. When the two run into each other on the hiking trails, and then serendipitously rescue two bear cubs, Lexi feels safe for the first time in she can’t remember when. But secrets have a way of surfacing...
With the danger around Lexi escalating, Ryder will do whatever it takes to stay by her side...

USA Today bestselling author TERRY SPEAR has written over forty paranormal romances. Heart of the Wolf was named a Publishers Weekly Best Book of the Year and Billionaire in Wolf’s Clothing was a Romantic Times Top Pick. A retired officer of the U.S. Army Reserves, Terry also creates award-winning teddy bears. She lives in Spring, Texas.