A haircut from hell, and the ensuing review of it, leads to a surprising romance between a sexy Scotsman and a young woman brought up in the foster care system.  Keep reading to get a tempting taste of Disaster by Dakota Issacs, along with getting my impressions of it, then learn even more about this book by visiting the other sites hosting this tour.  In honor of this third installment in the Love in the Apple series make sure to fill out the form below for the chance to win a $25 Amazon GC too! 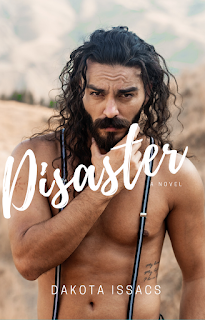 There are bad haircuts, and then there’s the bright orange mullet that sits atop Audra Harrison’s head:
Outright Disaster
A chastity belt you can wear on your head.
All Audra wants is for the Salon Apprentice to try and fix it. When she refuses Audra has no choice but to write a review warning other New Yorkers away from this over hyped salon.
When the salon manages to pull down the review, Audra declares war.
It becomes her mission to post pictures of her bad hair on every photo share app she can find.
Then her enemy comes for her. Hamish Stuart: the hair whisperer himself. Over six feet of beautifully muscled Scotsman that’s used to having supermodels and A list Actresses fall at his feet.
Now that he’s met her he wants more than apologies. He wants her heart.

Readers looking for a bit of afternoon delight will get just that with this erotically-charged tale that also put an occasional smile on my face. Add in some playfulness between the main couple, a bit of heart and soul, and readers will feel oh so satisfied by The End.  Though this book stands strongly on its own this series revolves around siblings out to find their HEAs in this next installment in the Love in the Apple series and with each turn of the page I fell even harder for sexy Scotsman Hamish Stuart.

From his delicious brogue to his sinful looks to a personality teeming with sensuality, Hamish is the kind of hero you won’t forget about anytime soon.  Hamish is a real romantic, a man who believes in insta-love (as seen during his initial meeting with an angry woman), and who longs to pamper the woman who’s unexpectedly captured his heart. He’s drawn to Audra the moment he learns about her background, drawn to her sass, and drawn to strong will in overcoming adversity.  All he wants is to make life easier for her...and fixing her hellish hairdo is the first step in their burgeoning relationship.  Hamish knows how to make a woman feel good and it led to many scorching interludes during her hair appointment and during his other encounters with her.  He’s a master at dirty talk with a talent for empowering a woman’s self-esteem.  From the first page to the last he quickly proved himself to be the quintessential book boyfriend and was the highlight of this story.

Audra Harrison grew up in the foster care system and still struggles to make ends meet today.  As a reward to herself for a new internship she splurges on a new hairdo at the top hair salon in New York.  It turns into a nightmare though as her hair ends up looking like an orange in a blender.  Her negative review soon catches the attention of the salon’s owner and sets her on a surprising path to HEA.  Audra’s a likable heroine, one who stands up for herself when she knows she’s right. Though life’s been tough for her she’s never asked for help and I admired her for that.  She has a funny and supportive friend/roommate who’s an admirable partner in crime and I enjoyed their very believable friendship.  I also enjoyed the sizzling connection between her and Hamish.  They were sweet and sexy together and I rooted for him to win her over every step of the way.  When it comes to matters of the heart though Audra was far less self-assured which frustrated me at times.  Hamish proved his devotion to her from the start so her doubts and ignoring his texts were a huge disservice to this near-perfect hero.

On a whole Audra was a likable heroine, but her fears frustrated me at times.  Hamish earned his place in her heart though and by the end she too realized it in this quick read full of scorching interludes and overtly sweet and sensual actions.  The story had a nice pace, appealing characters, but there was a roughness to the writing.  There was a rough around the edges feel to the dialogue that gave me a few mental speed bumps along the way.  Despite that this was still an enjoyable romance that has me wanting to read the other books in the series too!

I’m Dakota Issacs. I live in Manhattan with my husband where I drink too much coffee and read too many books. I love all sorts of romance from Historical to Contemporary. I write Contemporary Romances that are sweet with heat. You’ll always find a happy ending with no cliffhangers. If you want to talk books drop me a note at dakotaissacs@gmail.com. I would love to hear from you.