A man trying to make his place in the music world finds unexpected twists and turns, along with romance with a young woman trying to break free of familial obligations, in this gritty and fast-paced tale.  Keep reading to get a tempting taste of Rock Hardest by M.J. Roberts, along with my impressions of it, then add it to your bookshelf.  In honor of this third installment in the Chord Brothers series make sure to fill out the form below for the chance to win an eBook set of the three books in this series released so far, along with a $25 Amazon GC too! 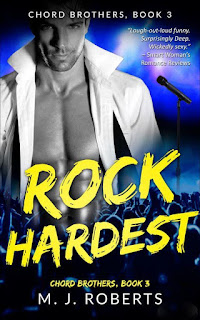 Cole’s world shattered seventeen years ago. Now he’s got one chance to get his life back on track. Cole starts his own band, hoping that going back to music will ease his tortured soul. There’s only one problem— he can’t find a drummer.
T. J. Casarez is stuck working in her family’s restaurant until her cousin calls her to audition. Cole’s not expecting a female drummer. Yet from the first beat they sizzle. But there’s no way she’s getting involved with a privileged, pretty boy.
She’s been burned before, and dating a band member is a recipe for disaster. Only...it’s not just their onstage chemistry that’s on fire.
She has no idea what happened to make him into the man who tempts her to break all her rules. Then outside forces threaten to tear T. J. and Cole apart.
How are they going to rock the hardest and keep their hearts intact?

After reading the two previous installments in the Chord Brothers series I knew I couldn’t let this one pass me by and even though it wasn’t a perfect read it was satisfying.  Courtesy of a romantic and charming hero who’s overcome a painful past, secondary characters who left a big mark, and reintroductions of couples from the previous books, this book quickly immersed me in the world of music that these brothers are making their own and has me counting down the days until the next installment arrives.

Cole Chord’s world imploded seventeen years ago with the rape and murder of their sister.  The guilt of that night weighed on him and ultimately drove him to burying his pain under a haze of drugs.  He’s been clean for years now, remade his life into something successful, and is ready to start his own band.  He lives a comfortable life due to his realty company, but music is what truly feeds his soul and is what brings him together with TJ.  She may come from a working class family, but he senses from the very start that they’re meant to be and does all he can to convince her of it.  Their journey together doesn’t go smoothly though as her preconceived notions, and a big misunderstanding, cause a few speed bumps along the way in a frustrating road to HEA.  Through it all Cole’s a kindhearted hero willing to spend any amount of money to make things easier for others.  He’s a strong support to his family, and to his bandmates, and I was rooting for him from the very first as he deserved a bit of happiness after all he’s gone through.

TJ Casarez is an admirable heroine with a love of family, a strong work ethic, and a tendency to be the dutiful daughter.  Her family means a lot to her but they use her familial obligations to keep her doing what THEY want, instead of her going after her own dreams.  Her dream is to play drums for a living and when her cousin Spider invites her to audition for the new band he just joined it will change her life irrevocably.  She becomes more empowered behind her drum kit, comes out of her shell to start going after everything she wants...including sexy lead singer Cole.  After a bruising past relationship she might at first see him as only a little rich boy, but the more they connect the more good things she sees in him, and the more protective he becomes when in her presence.  Behind the drums she becomes a bit of a badass, becomes a commanding presence who owns the stage.  She wasn’t a perfect heroine though as her past experiences with her father’s addiction caused VERY FRUSTRATING moments late in the story and it had me wanting to shake her for her close mindedness.  I wish that she had stood up to her family more often, and earlier on too, as she tented to go quiet and run when things got difficult.

From the first page to the last I found this an entertaining read with a compelling hero and a larger than life cast of secondary characters.  I enjoyed the slow burn between Cole and TJ, enjoyed watching him subtly woo her through his tender and romantic words and deeds.  Their scorching encounters were well worth the wait and I enjoyed seeing TJ take charge in many of these steamy scenes.  Alongside this entertaining main couple were the other members of Phoenix Rising...Spider and Tremor.  Spider is TJ’s cousin and there’s a definite vibe of danger surrounding him.  He’s quick to anger, very touchy when it comes to sexuality, and is very protective of TJ almost to the point of smothering.  The characteristics of his ethnicity were a bit too stereotypical at times, but I still appreciate Ms. Roberts crafting such an intriguing character that I hope to see more of in the future.  Tremor too is unforgettable, a giant of a man with a booming voice and a tendency to push people’s buttons.  He and Spider have numerous combustible encounters which will leave readers wondering about their connection.  Their scenes together sizzle and teem with sexual tension. When it comes to sex Tremor is clearly embracing that part of the rockstar lifestyle, flitting from women of varying ages to couples, and his hedonistic side is one he displays proudly...along with a bold and eclectic clothing style.  He certainly left a lasting impression on me and I look forward to seeing more about this character and what’s hiding behind his larger than life actions.  Seeing past couples rounded out this story beautifully and I enjoyed seeing their HEAs continue, loved seeing these families and friends support each other so strongly.  While there was a bit of roughness regarding the narrative, a bit of frustration over the heroine’s actions, and a storyline about an embezzler in Cole’s company that came out of nowhere, I still found this a satisfying tale that has me counting down the days until the next installment in this series hits bookshelves. 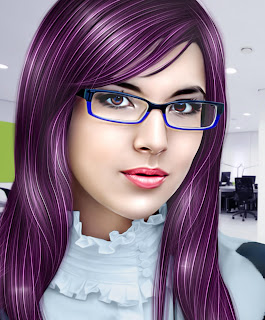 Fan favorite M. J. Roberts is known for lovable characters, witty dialogue, exciting plot twists, fast-paced action that keeps you on the edge of your seat, and romance scenes that sizzle.
With more than two million copies of stories in circulation worldwide, Roberts is well loved for creating characters who feel as real as your most cherished friends.
M.J. Roberts is the author of seventeen novels, including the popular Rock Hard: Chord Brothers series, and over twenty short stories; she’s won six literary awards including the Literotica Summer Lovin’ Contest 2015 for Risk Your Heart and the April 2019 gold medal from Literary Titans for Rock Hard: Chord Brothers, Book 1.
Roberts is also an editor, songwriter, audiobook narrator, and professor of creative writing. A modestly humble egomaniac with a penchant for superheroes, she’s married to an awesome professional musician (a.k.a. The Rock and Roll God).  Her ‘I’m with the band’ status and access to a bunch of real-life alpha bad boys means she’s always saying ‘Anything you say can and will appear in print. Names will be changed to protect the guilty.’