Readers will find themselves drawn to this romance set in the world of medicine as a strong-willed medical assistant becomes attracted to the hospital’s new bad boy orderly in a journey full of ups and downs.  Keep reading to get a tempting taste of Bad Boys Don’t Make Good Boyfriends by Melanie A. Smith, then discover more about this book by visiting the other sites hosting this tour.  You’ll also get the Top 10 reasons why women are drawn to bad boys which will help as you start counting down the days until this book hits shelves on May 19th.  In honor of this second installment in the Life Lessons series make sure to fill out the form below for the chance to win a signed copy of this book, a mug, a decorative bookmark, a tote bag, along with other goodies!


**Top 10 reasons Why Women Are Drawn To Bad Boys**
Love it! In no particular order (and there is some overlap to these ideas, which I’ve discussed extensively with a few people haha):
1. To piss off their parents.
2. To rebel.
3. They’re dangerous.
4. They’re sexy.
5. They’re more experienced lovers.
6. They’re forbidden fruit.
7. Because you’re a bad girl and you need a bad boy to keep up with you.
8. It’s fun.
9. They think they can “fix” them.
10.They think if they get him to settle down, they’re special. 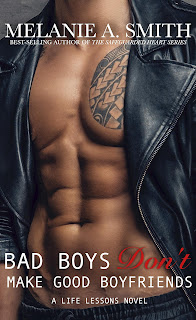 From best-selling author Melanie A. Smith comes the second book in a new series of steamy contemporary medical romance standalone novels about life lessons that break all the rules.
Even when you know better, sometimes it’s simply too tempting…
Hospital work isn’t for the faint of heart. Becca Dillon knows that firsthand, having worked as a medical assistant in the cardiac unit at Rutherford Hospital for longer than she cares to think about. What she does care to think about is having fun, gossip, and...guys. Her favorite of the three. And why stick to one, when you can sample them all?
That’s exactly her plan when a workplace crush on a mysterious bad-boy orderly unexpectedly takes a very steamy turn. But Vincent DeMarco turns out to be nothing like she expected, and before she knows it, she’s falling hard and fast. She wants him in ways she’s never wanted anyone before, but there’s something he’s keeping from her. Something that’s holding him back. And Becca is going to find out what.
Even though she knows that bad boys don’t make good boyfriends, he seems like he might be so much more. Will her quest unlock the truth behind who he really is? Or will it end their relationship for good? Either way, ready or not, Becca’s world is about to change. 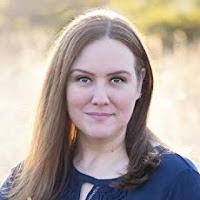 Melanie A. Smith is the best-selling author of The Safeguarded Heart Series and other contemporary romance fiction. Originally from upstate New York, she spent most of her childhood in the San Francisco Bay Area before moving to Los Angeles for college. After that, she spent almost fifteen years in the Seattle Area, and now lives in the Dallas-Fort Worth area of Texas with her family.
A voracious reader and lifelong writer, Melanie’s writing began at a young age with short stories and poetry. Having completed a bachelor of science in electrical engineering at the University of California, Los Angeles, and a master’s in business administration at the University of Washington, her writing abilities were mainly utilized for technical documents as a lead engineer for the Boeing Company, where she worked for ten years.
After shifting careers to domestic engineering and property management in 2015, she eventually found a balance where she was able to return to writing fiction.
Melanie is also a Mensan and enjoys spending time with her family, cooking, and driving with the windows down and the stereo cranked up loud.