Readers will be drawn to this tale of loss as two people find a healing balm in each other’s arms, a connection that doesn’t always go smoothly.  Keep reading to get a tempting taste of Addictive Alessandro by Anne Marie Citro, along with my impressions of it, then add this book to your shelves.  In honor of this third installment in the Savage's Buck & Doe series make sure to fill out the form below for the chance to win a $15 Amazon GC too! 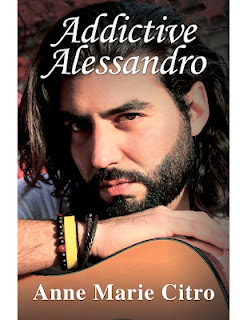 Alessandro Savage walked through the same maze of streets in the French Quarter that he had walked for the last few months. He carried two things: his guitar case and a bottle of Jack. Months of self-induced punishment, wandering lost, looking for redemption. At least, that was the lie he told himself. It should have been him who died that fateful night the music had died in the Las Vegas massacre. He could never have absolution, because he had committed a crime unforgivable to those he loved.
Family was everything to the Savage brothers. Alessandro had broken that sacred bond when he had killed his oldest brother. He hadn’t been the one to pull the trigger, but he was as guilty as the man who had. This was why he needed to get drunk every day to numb the pain. He couldn’t deal with not being able to go back to the past and make things right.
Ava Lombardi hated bachelorette parties and her cousin’s was going to be extremely painful. She was spending four days at Savage’s Buck & Doe Resort. Ava was a beautiful loner who had the ability to help the Savage family find Alessandro but didn’t want to get involved.
Getting Alessandro home was only half of the battle the other would be helping him to become clean and sober and stay that way. Ava had closed herself off years ago but not all ghosts were left better in the past.
Not all rehabilitation opposed to addiction were about abstinence. Could two souls that lost redemption find peace in each other’s arms? Would Ava be the one addiction Alessandro couldn’t beat? 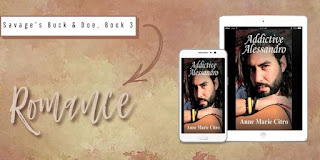 With all the losses we’ve experienced over the last few years, from mass shootings to a deadly pandemic, this is a story that will definitely resonate for readers.  It’s a timely tale with a strong sense of family that will quickly immerse readers into one family’s grief as a guilt-ridden man finds love from a stranger a healing balm.  Through all its emotional highs and lows reader’s heartstrings will be pulled in every direction which ultimately leads to a triumphant ending and an immensely satisfying HEA.

Alessandro Savage is a broken man at the start of this story, weighed down by guilt over something beyond his control.  He can’t see the truth through his pain though and he’s on a destructive path of alcohol and drug addiction and it broke my heart to see him fall so low.  It’s a heavy issue that the author deals with realistically and with respect, and they don’t pull any punches.  It’s a difficult journey for everyone involved, both for Alessandro and for his family.  From the very first page his family is the kind we all wish we had and I was drawn to each member and their perfect imperfections.  They’re a tight-knit group and when one hurts they all hurt.  The Savage family has already had to deal with the loss of their patriarch and their oldest child, so Alessandro’s vanishing is adding even more pain and worry.  They’ve become desperate to find him and the new guest at their wedding resort could be the answer to their prayers.  I adored the Savage family!  I love their strength, their support, and their love is what fuels this story.  Knowing how much support he has at home had me frustrated a time or two by Alessandro.  Knowing how forgiving and loving they are, how much they want to wrap him in their blanket of love, had me hoping for one moment of clarity to take him home.

Ava Lombardi is a formidable heroine, brash and outspoken, larger than life and is just who Alessandro needs to heal.  Whereas Alessandro’s family is loving and supportive, Ava’s ignores her and treats her as a pariah.  Her unique abilities have them treating her as something obscene and it broke my heart as there were times when she herself chose to fade into the background.  Alessandro’s family treated her like one of their own, once they realized she could find him, and it warmed my heart that they brought her into the family fold wholeheartedly. Ava’s abilities are dealt with in a casual manner, even though this bit of paranormal felt slightly out of place at times.  Her interactions with the Savage family were warm while her interludes with Alessandro sizzled. There was rockiness though too as she stood by him while he dealt with his addictions, presenting hard truths as well as secrets.

On a whole this was a satisfying story with a bit of grit along with moments of sweetness.  The main couple are a compelling pair with a journey that pulled at my heartstrings and had me rooting for them every step of the way.  Along with a likable main couple there was a family that I was drawn to and it was their love and support that drove this story.  It was the Savage’s love that gave Alessandro a soft place to land and gave Ava a home she so richly deserved.  The matriarch of the family, Valentina, is especially wonderful as her unwavering support and strong beliefs in her children made me smile.  She’s one mama bear you don’t want to argue with.  While watching her children find HEAs there’s glimpses of her finding a spark of her own with another and I look forward to where things go to next for her.  Readers drawn to strong families, broken heroes, and a gritty narrative will want to add this book to their shelves while grabbing the previous installments in this series to see where the Savage family started to celebrate where they are today.

My rating is a B+

Anne Marie Citro grew born and raised in the greater Toronto area of Ontario, Canada. She grew up in a large, loving family. Anne Marie is married to a very patient man. He is the love of her life. They have four very cool sons, and the girls they brought into their family that have become daughters of her heart. She has been blessed enough to finally have two beautiful granddaughters after four sons. She has her own personal gaggle of girlfriends, who enrich her life on a daily basis and make her laugh. Caesar Friday is her favorite day of the week. Caesars with the girls and date night with her hubby. She worked with special-needs teenagers, that taught her how to appreciate life and see it through gentler eyes. Anne Marie was encouraged by her husband to follow her lifelong dream to write. She loves the characters that take over imagination and haunts her dreams. She loves the arts and she has tried her hand at painting, wood sculpting, chainsaw carving, wood burning, metal and wire sculptures. Yes, her husband is a very patient man! Anne Marie is an avid reader and enjoys about three books per week. But nothing makes her happier than riding on the back of her husband's Harley and throwing her arms out and feeling the wind race by. Anne Marie and her husband take a few weeks every year to travel to spectacular destination around the world. Anne Marie is excited and can't wait to see what the next chapter holds for her life.