It’s a steamy romance of second chances that drives this story of two people torn apart by fate who find themselves reconnecting to save a life.  Keep reading to get a tempting taste of Wicked Secret by Sawyer Bennett, along with my impressions of it, then add this seventh installment in the Wicked Horse Vegas series to your bookshelf! 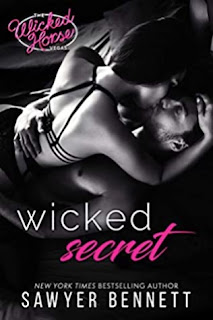 Those that truly know August Greenfield, will tell you that I live my life to the fullest. Work hard as part of the team at Jameson Force Security but play just as hard at The Wicked Horse Vegas. I have no regrets about my life.
Well, maybe just one.
Leighton Hale was my first love and the woman I wanted to spend my life with, but one day she was just gone. Vanished without a trace. Even my extensive contacts as part of the team at Jameson left me empty-handed in my search for answers. My single remorse is never being able to find out what happened to her, because no matter how difficult the truth may be, it can’t be as bad as never knowing at all.
Ten years later, a knock on my front door brings me face-to-face with the woman I thought I’d never see again and nothing in my life could have prepared me for the secrets she holds. 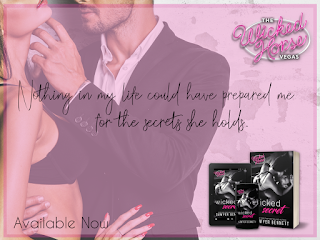 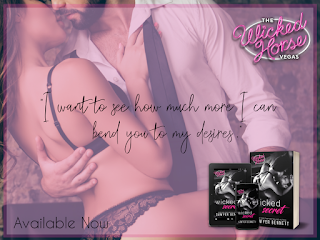 It’s the best of both worlds in this latest release from Sawyer Bennett as the world of the Wicked Horse meets Jameson Force Security in a suspenseful and erotically-charged romance.  Young love with dreams for the future were dashed with ten years of broken hearts and unanswered questions the result with a second chance to save a life and find HEA fueling this story and keeping me glued to the pages.  From its appealing characters, to its steamy interludes, to nicely paced moments of danger, readers will find themselves captivated by this story and looking forward to what comes next.


To all the world August Greenfield seems to be living life to the fullest with his globetrotting as an agent for Jameson Force Security and his scorching encounters at the Wicked Horse sex club.  While he might seem fulfilled by his lifestyle, they hide a heart that was bruised ten years ago when the love of his life left without a word.  His attempts to find her resulted in nothing but frustration and anger over her disappearance.  A knock on the door in the middle of the night though brings his past racing back to the present, bringing with it answers he’s always longed for along with a big reveal that will forever change his life.  The woman he’s never forgotten is back and it arouses all of August’s protective instincts, has him employing all his talents to keep her and her family safe.  Their second chance soon becomes an action-packed, erotically-charged, rollercoaster ride to HEA that had me frantically turning the pages towards its immensely satisfying conclusion.  From the start August is a delicious hero, hardworking and hard when playing, a man with strong loyalties.  Leighton’s return brings out all sorts of conflicting emotions in him...he’s hurt that she never contacted him before now, hurt that she kept a big secret from him, but understands why she did what she did.  Though he understands, that doesn’t keep him from sometimes saying or doing something hurtful.  He might like to keep their relationship all about sex, but it’s clear there’s meant to be more between them and as the story progresses they make their way back to each other.  The dreams they once had are finally able to come true in this scorching and sentimental story.

Ten years ago Leighton Hale dreamed of marrying August and having a family...until she and her father were dragged away in the middle of the night in order to keep them safe.  She never forgot him though, and with a life-altering disease staring her in the face, she’ll need him now more than ever.  After arriving at his door the truth she reveals to him is a heart-wrenching one, one that robbed him of time, and his early anger is understandable.  It makes for a rocky start to their reunion, but it ultimately binds them together as they stand in solidarity to make her son Sam healthy.  Leighton was young when she got taken away, forced into keeping secrets to keep her family safe.  She’s grown stronger over the years though and when Sam falls ill she thinks only about him as she races to August.  To get his help she’ll have to give up control, both in and out of the bedroom.  Doing so gives her more power than she ever imagined as August isn’t the boy he once was...he’s now a determined man who always gets what he wants.  Leighton’s a strong-willed woman, a true mama bear, a woman who still wants a HEA with August and gives as good as she gets.  Her and August scorched up the pages throughout their second chance and I enjoyed seeing them rediscover each other.

This was a fast-paced story with a perfect balance of sexiness and suspense.  I was kept on the edge of my seat, while blushing a time or two, as I gobbled up every interaction between August and Leighton.  August is a drool-worthy hero with a protective side I was drawn to and it warmed my heart to see him with Sam.  He took on the fatherly role quite well as his time with Sam felt realistic, especially with the seriousness of Sam’s health.  While he embraced his fatherly side, he didn’t hesitate in employing sensuality in his interludes with Leighton and these scenes utterly sizzled.  A scene between the two of them and his friend Declan was particularly unforgettable.  Declan Blackwood was a decadently delightful addition to the story, a rich boy living on his family’s hotel wealth.  He too embraced a hedonistic lifestyle, but showed a strong sense of loyalty too when it comes to his fledgling friendship with August.  Declan is sexy, unrepentant in his desires, and I’m left longing to know more about him and I hope his story is on the horizon.  A strong main couple, immensely appealing secondary characters (especially the endearing Sam and sexy Declan), and a captivating storyline make for yet another winner from Ms. Bennett involving two entertaining series! 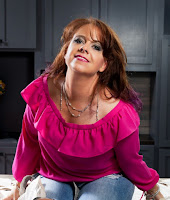 New York Times, USA Today, and Wall Street Journal Bestselling author Sawyer Bennett uses real life experience to create relatable stories that appeal to a wide array of readers. From contemporary romance, fantasy romance, and both women’s and general fiction, Sawyer writes something for just about everyone.
A former trial lawyer from North Carolina, when she is not bringing fiction to life, Sawyer is a chauffeur, stylist, chef, maid, and personal assistant to her very adorable daughter, as well as full-time servant to her wonderfully naughty dogs.