From the very start readers will find a story full of intense emotions, a love that is meant to be, and a treasure trove of second and third chances as the town's bad boy and the girl who's loved him through every up and down find their future put to the test.  Keep reading to get a tempting glimpse of Conjugal Visits by Lani Lynn Vale, become obsessed by this cover, then start counting down the days until this second installment in the Souls Chapel Revenants MC series hits bookshelves on February 23rd, 2021! 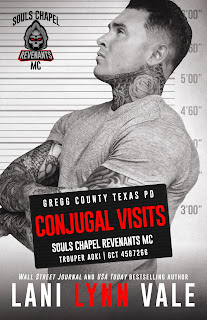 Don’t ever, ever, ever go near that boy. Not unless you want to be a single mother at seventeen. That boy is Bad with a capital B.
The words that my father spoke to me when it came to Trouper Aoki didn’t scare me like they probably should.
In fact, they only made me intrigued all the more.
When it came to Troup, there was just no resisting fate when it came to the two of us.
Even at eighteen, when we went our separate ways with the promise to come back to each other once we were done pursuing our careers, I knew he would always be it for me.
And color me surprised when eight years after making that pact with Trouper, we were once again reunited. Only this time in an undercover FBI investigation—me, the FBI officer, and Troup call sign ‘State’ as a military liaison.
Trouble always finds him. You’d do better to run far, far away.
Truer words had never been spoken.
From the time Troup was a young boy, he’d been in some kind of trouble.
So it only goes to show when he winds up in the FBI investigation with none other than Beckham Spurlock, his high school sweetheart, things are bound to go wrong.
Only, he has no idea how wrong until things go bad. Really, really bad.
All it takes is saving her by hurting another for him to see the wrong side of a jail cell.
To make matters worse, he has to live the next fifteen years in prison knowing that his son will grow up without him. And the woman he loves will likely move on to a man that isn’t so much trouble. 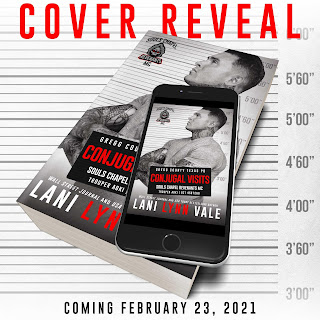 AUTHOR INFO:
Lani Lynn Vale is a Wall Street Journal & USA Today Bestselling Author of over thirty titles. She is married with three children, two dogs, two cats, a donkey, and a couple (a couple also meaning over twenty) chickens.
When she’s not writing, you can find her curled up in her favorite chair reading. Lani is married with three children and lives in the Great State of Texas.
WEBSITE  |  FACEBOOK  |  INSTAGRAM  |  TWITTER  |  GOODREADS AUTHOR PAGE  |  BOOKBUB AUTHOR PAGE
at October 30, 2020