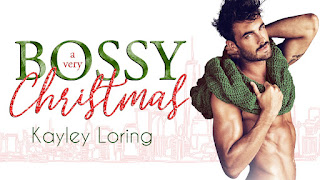 With the holidays fast approaching, readers will find this fun and flirty romance the perfect holiday gift as a boss has his assistant play his fake girlfriend with things quickly turning oh so real.  Keep reading to get a tempting taste of A Very Bossy Christmas by Kayley Loring, along with my impressions of it, then add this festive romance to your bookshelf! 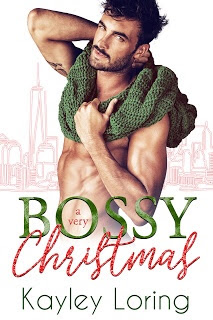 What’s the actual last thing you’d ever want your executive assistant to see you doing the morning after you had hot, drunk, angry sex with her in a terrible hotel room? Dancing around your terrible hotel room to “Come and Get Your Love” like Star-Lord in Guardians of the Galaxy—naked? Yeah. Me too.
And yet, here we are.
This isn’t even the most unprofessional thing that’s happened between us in the past couple of weeks.
The first was when I agreed to let her have Christmas Day off, but only if she goes with me to three family gatherings as my fake girlfriend.
The second was when she caught me belting out a Christmas song on stage in the awful hotel bar.
The third was the hot, drunk, angry sex that followed, but I do not regret it.
And she hasn’t even found out the real reason I need her by my side this holiday season.
I need to pull it together before I do the dumbest, most unprofessional thing of all—fall head over heels in love with the only assistant who’s lasted more than a month at the job and claims to hate me and my moods more than she hates eggnog.
And I’ve seen how much she hates eggnog. 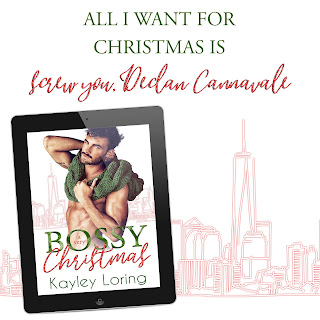 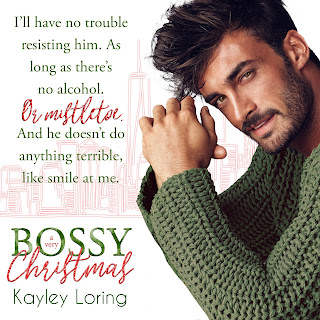 MY IMPRESSIONS OF THIS BOOK:
The last few books I've read from this author have been winners with entertaining couples and witty banter...add in a holiday theme and I knew I had to read this book! What I got was a quickly-paced read that charmed me through playful interludes and sweet and sensual encounters between the two lead characters as well as two thoroughly entertaining families who unwittingly played matchmaker.  It's a well-crafted rom-com that warmed my heart while putting a smile on my face.
Declan Cannavale is a successful real estate attorney, one who lives to work.  That's normally a good thing as it's made him a rich man but it's causing some problems when it comes to planning for the holidays courtesy of his loud and strong-willed Irish-Italian family.  When they expect him home for the holidays he's at first able to use work as an excuse, but the moment he mentions a girlfriend is the moment he's forced into getting a fake girlfriend.  And who better than the outspoken young woman keeping his life in order.  Though their connection starts off with a contract things soon turn very un-businesslike in a crackling relationship teeming with sexual tension and humor.  Through it all I was utterly charmed by Declan, though he frustrated me a time or two, it was nothing that was meant to be hurtful.  He's a sexy man who knows what he wants, but is out of his element when it comes to women.  He's clearly thrown off his game because of Maddie and it was entertaining watching the verbal foreplay going on between them that ultimately pointed to more brewing between them.  His interactions with his family were endearing to see too and the large cast of secondary characters made me smile with their machinations.
Maddie Cooper's just what Declan needs in his life as she's the best executive assistant he's ever seen.  She's a take no prisoners woman who gives as good as she gets.  She doesn't put up with any of Declan's crap and doesn't hesitate to tell it like it is which makes her incredibly attractive to him in early hints he gives about his feelings for her. She's close to her family too which is why it's so vital for her to go home for the holidays.  But with a workaholic boss that's going to be difficult. When he makes her an offer she can't refuse though, the fake relationship he proposes becomes all too real. Maddie's a wonderful heroine, someone I can totally see as a friend.  She's sassy with a no-nonsense attitude that had me cheering her on in her back and forth banter with Declan.  Her interactions with her family were charming and funny too and including them in the story enhanced the holiday feeling.
On a whole this story made the holiday better for me.  Amidst all the chaos and uncertainty of the country right now, this book made me laugh while it warmed my heart.  The banter was crackling with tons of flirtatiousness that had me hoping they'd soon give in to each other. Add in their zany and outspoken families and I found even more to recommend this fun, flirty, and festive read!
My rating for this is an A.
*I got this book from the author for review in exchange for my honest opinion. 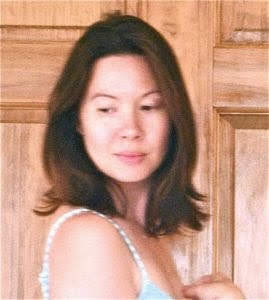 AUTHOR INFO:
Before writing steamy romantic comedy novels, Kayley Loring got a BFA in creative writing from a Canadian university and had a fifteen-year career as a screenwriter in Los Angeles (under a different name). She mostly wrote PG-13 family comedies that studios would pay her lots of money for and then never make into movies. In 2017 she decided to move to the Pacific Northwest and write about all the fun stuff that she wasn't allowed to write about in those PG-13 scripts. Now she’s breathing cleaner air and writing dirtier words. It’s an adjustment she’s happily getting used to.
INSTAGRAM  |  FACEBOOK AUTHOR PAGE  |  FACEBOOK READER GROUP  |  WEBSITE  |  NEWSLETTER  |  BOOKBUB AUTHOR PAGE
at October 26, 2020