Opposites attract in this scorching tale of second chances as a bad boy finds himself attracted to his best friend's sister in a romance that will have readers rooting for them every step of the way.  Keep reading to get a tempting glimpse of Corrupt My Mind by Kelsey Clayton, along with getting my impressions of this combustible contemporary romance.  In honor of this first installment in the North Haven University series make sure to visit the link below for the chance to win 1 of 5 signed print books too! 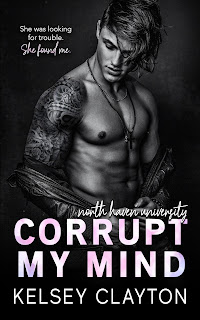 My name is Zayn Bronsyn,
and I think I screwed up.
I wasn’t supposed to fall,
especially not for her.
She’s in a league of her own,
and I’m just her brother’s scumbag friend.
The last time I saw her,
she was thirteen with braces.
Now, she’s back from boarding school,
with an hourglass body that’ll bring me to my knees.
If Easton finds out I hooked up with his sister,
he might actually kill me.
She’s too innocent, too perfect for a guy like me,
but I can’t resist bringing her into my messed up world.
Amelia Donovan might be the one to revive my blackened heart. 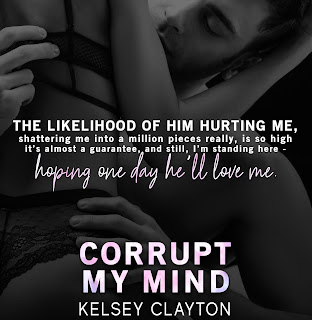 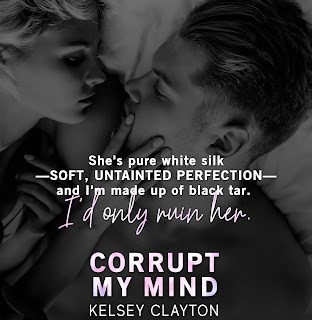 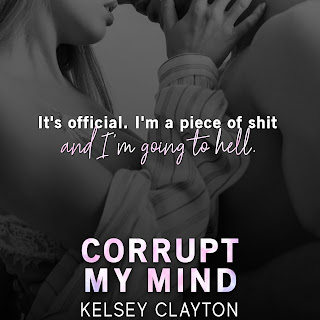 MY IMPRESSIONS OF THIS BOOK:
As a fan of romances between someone's friend and their sibling, I was drawn to this story from the very first word.  Though the premise if familiar it's the witty banter, crackling connection, and non-stop sexual tension between bad boy Zayn and good girl Amelia that kept me glued to the pages.  Add in angst, complicated emotions, and a few twists and turns and readers will find one heckuva story that will have them inhaling the pages.
When this story starts readers get to see these characters, ones readers have met before in a previous series of books, in the collegiate world with all the stresses associated with that.  It's a backdrop that promises new beginnings for some while forcing others to take on a more adult role because of past actions.  The first impression of Zayn is of a young man with a tough exterior, someone loyal and protective of his friends to a fault.  That tough exterior though hides a man with a big heart, someone who doesn't feel worthy of happiness himself.  He's a sexy beast who's been friends with roommate Easton for many years and has fond memories of the little sister that followed them around.  Those memories are turned upside the moment they're reunited at a party as she's no longer a 13 year old with braces...she's now a sexy and vivacious young woman who pushes every one of his buttons.  He knows he can't act on his feelings though as it would be a betrayal to Easton who's still in a dark place over past actions.  Zayn also fights his feelings because he thinks he'll taint Amelia, mar her goodness with his bad and my heart ached for him seeing himself in that way as he could not be more of a hero.  He's self-sacrificing with a big heart and a kind soul that showed itself in ways both subtle and bold.  The attraction between him and Amelia was a slow burn, a journey that wrapped me in a warm embrace while I was desperately cheering them on to give into their mutual temptations.
Amelia's the proverbial good girl with teen years that had her falling head over heels for her brother Easton's best friend before leaving for boarding school.  When readers are reintroduced to her here they see a young woman ready to live life to the fullest.  They also see a woman with an air of naïveté but determination too once she finally decides to give in to her long-hidden desires.  Zayn's the embodiment of her perfect hero and she's never found anyone else who can compare.  Seeing him again both scares her and invigorates her as she's finally going to go after what she's always wanted in a forbidden romance full of unrelenting conflict from the outside and from within.  I loved Amelia, found her both realistic and easy to relate to with her big heart and infectious outgoing demeanor.  She saw the good in Zayn and worked hard to show it to him too in a connection that started out sweet but quickly became crackling as they danced around their desires and Zayn's need to do right by others.
This is an intensely emotional romance, a bit forbidden in the eyes of some, but it had me glued to the pages from start to finish.  Zayn and Amelia were both larger than life, good hearted and caring characters who deserved a HEA.  They started off as sweet friends but it's clear they were meant to be more in a hard-fought journey full of secrets and dark thoughts that kept me on the edge of my seat.  Surrounding this unforgettable main couple was an equally entertaining cast of secondary characters, ones who have grown up since last we saw them.  Among them is the sexy and secretive Easton, a young man still struggling over the past, and I was drawn to him wholeheartedly. Others who I found myself drooling over included Jace and Carter, both of who have baggage they need to deal with and it has me counting down the days until we return to this world.  On a whole Ms. Clayton has crafted a captivating New Adult romance of friends becoming oh so much more in a journey full of heart and soul!
My rating for this is an A.
*I got this book from the author for review in exchange for my honest opinion. 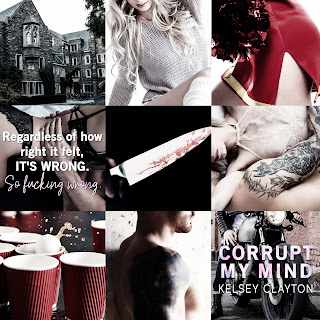 AUTHOR INFO:
Kelsey Clayton is a 29-year-old mother of two from a small town in lower Delaware. Born and raised in New Jersey, she discovered her love for writing when she used it as a coping mechanism to get through hard times. Since then, she has been passionately writing novels that make people fall in love with the characters and the storylines. She writes from a mix of personal experiences and imagination. As an avid beach lover, her dream is to write an entire book with her feet in the sand.
FACEBOOK | TWITTER | INSTAGRAM | AMAZON AUTHOR PAGE | BOOKBUB AUTHOR PAGE | GOODREADS AUTHOR PAGE | WEBSITE | NEWSLETTER
**********GIVEAWAY**********
WIN 1 OF 5 SIGNED PRINT COPIES OF THIS BOOK here.  ENDS 10/23.
at October 18, 2020

***Win a mug, signed print copies of the first two books in the Falling Stars series, along with a $50 Amazon GC in honor of Falling Into You by A.L. Jackson here. Ends 10/20.