From tragedy comes love for two people dealing with loss and their emotional scars in this engaging series starter set in the hockey world.  Keep reading to get a tempting taste of Badenby Sawyer Bennett, along with getting my impressions of it, then add this first installment in the Pittsburgh Titans series to your bookshelf too! 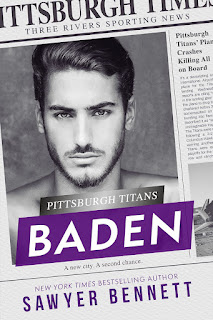 After suffering a horrific injury that threatens to end his career, Baden Oulett is about to learn that sometimes a fresh start is just what the doctor ordered.
I worked my whole life to achieve one goal—play professional hockey. As part of the defending Cup champion Arizona Vengeance, I was living my dream until one split second decision destroyed it all. Instead of lacing up my skates and hitting the ice, I’ve spent my days in rehab and physical therapy just so I could walk again. When a coaching opportunity with the Pittsburgh Titans is presented to me, I find myself with a career I had never considered but which allows me to continue being part of the sport that I love.While my injuries are physical, the same can’t be said for the woman I rescued. Suffering from wounds that can’t be seen, Sophie Winters has withdrawn from the world in fear and guilt. I didn’t know Sophie before that fateful night and have only met her once since, but I refuse to let her face her demons alone. Determined to be a friend, I support Sophie in the only way I know how…by simply being there.Through our shared trauma, Sophie and I begin to find peace within one another. As we grow closer, what started as friendship becomes more intimate until our broken pieces become one. But can a love born of anguish endure, or will the pain of our past prove too much to overcome? 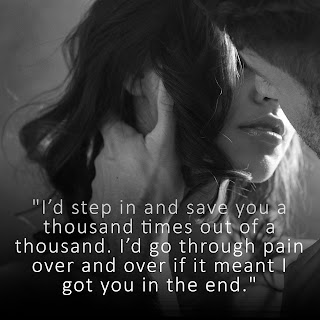 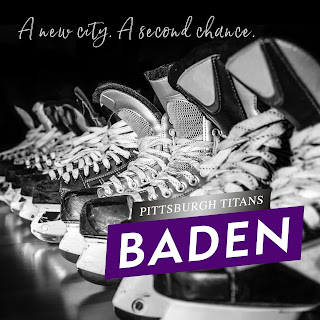 MY IMPRESSIONS OF THIS BOOK:
From the ashes of tragedy comes this inspirational and heartwarming romance of two bruised souls finding a connection through the healing power of friendship and love.  Picking up after the events that played out throughout the Arizona Vengeance series comes this series starter that pulled at my heartstrings from the first page to the last and has me excited for where things will go in the future.
At the start of this story Baden Oulett's still dealing with his grief over the loss of his friend in a fiery plane crash that decimated the Pittsburgh Titans hockey team as well as deciding on his own future path after a life-altering injury he sustained in defense of a woman being assaulted.  Until now, Baden's been focused on his recovery, doing all he can to get the use of his legs back while contemplating whether he can ever really play again.  When he's offered a coaching job with the Titans it forces him into finally making a decision about his future, a decision that once again brings him face to face with a woman who needs his help...the woman he saved from harm once before, but who needs help once again.  Baden's an amazing hero!  The glimpses readers have gotten of him since the incident that changed his life have shown a man of grit and determination, a man with a big heart who's never regretted doing what was right despite the changes it forced on his life.  He's been in a bit of a standstill though, not wanting to give up his chance to play again, but wanting to be realistic too.  The offer to coach comes at just the right time, giving him the push he needs to start over while reintroducing him to the woman whose life changed his.  What he finds is a woman needing a friend, a woman who's been hiding from the world.  Together they form a friendship, one that shows him to be infinitely patient, loving, and supportive.  As they spend more and more time together their friendship evolves into something even stronger, a love that was transforming for both of them and that warmed my heart.
Sophie Winters is an unforgettable heroine, one who's been through a lot but is still a survivor when readers see her again.  The trauma of that day though lingers still as she's practically a hermit, dealing with PTSD and anxiety all on her own.  Baden's reappearance is just what she never knew she needed, with it being the push she needs to more fully deal with her own emotional scars.  Seeing their instant connection, the ease of their rapport, warmed my heart and brought a smile to my face.  In her comfort zone, Sophie is a witty and funny heroine, and I was cheering her on with each baby step she took forward.  Together, she and Baden are an imperfectly perfect pair, one whose connection encompasses both the body and soul.  Their romance was powerful to see evolve, inspiring to witness, and a feel-good narrative that made for a wonderful series starter.
Ms. Bennett has crafted yet another epic romance set in the hockey world.  From the sadness and tears of the tragedy seen in the Arizona Vengeance series comes this uplifting tale of friends becoming lovers, two people who were there for each other's worst moments who are now starting over together.  This series starter brings back some familiar faces, which gives readers a feeling of family.  Along with some fan favorites, Ms. Bennett slowly introduces a whole new cast of characters who become pieces to the puzzle that is the patched-together Pittsburgh Titans hockey team.  On a whole they're a compelling cast of characters who I look forward to seeing more of in the talented hands of Ms. Bennett.
My rating for this is an A.
*I got this book from the author for review in exchange for my honest opinion. 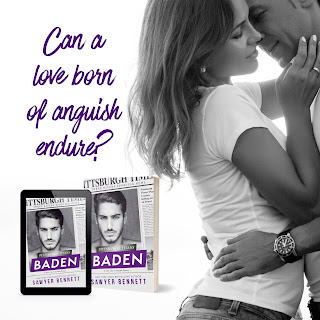 AUTHOR INFO:
New York Times, USA Today, and Wall Street Journal Bestselling author Sawyer Bennett uses real life experience to create relatable stories that appeal to a wide array of readers. From contemporary romance, fantasy romance, and both women’s and general fiction, Sawyer writes something for just about everyone.
A former trial lawyer from North Carolina, when she is not bringing fiction to life, Sawyer is a chauffeur, stylist, chef, maid, and personal assistant to her very adorable daughter, as well as full-time servant to her wonderfully naughty dogs.
If you’d like to receive a notification when Sawyer releases a new book, sign up for her newsletter HERE.
FACEBOOK  |  TWITTER  |  INSTAGRAM  |  GOODREADS AUTHOR PAGE  |  WEBSITE  |  BOOKBUB  |  READER GROUP
at January 11, 2022