A man who has no interest in long-term finds himself attracted to a woman with trouble on her tail in this sexy and suspenseful MC-themed romance.  Keep reading to get a tempting taste of Legend by Marie James, along with getting my impressions of this 19th installment in the Cerberus MC series, then add it to your bookshelf too! 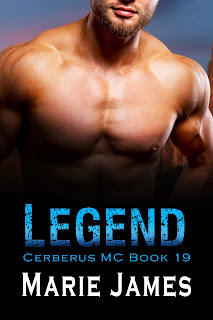 I wouldn’t call it love at first sight, but my body definitely reacted when I saw her. Getting Faith Robbins under me became my obsession.
I knew I wanted fast and done.
It’s how I always did things.
Looking for anything more with a woman was never in the cards.
I wasn’t like the other guys in the Cerberus MC. I didn’t want more.
It was physical, sating a desire.
Then someone began to seek revenge, and my other instincts kicked in. Spending time with her was about protecting her, keeping her safe. Now if only I could remind my heart what the plan was. 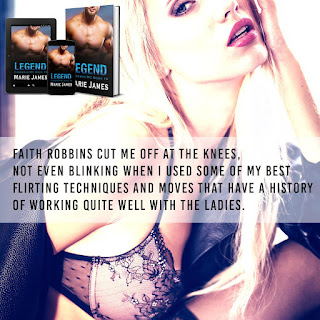 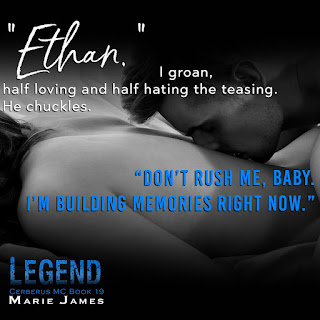 MY IMPRESSIONS OF THIS BOOK:
As a fan of MC-themed romances I've enjoyed the handful of books that I've read that comprise this series.  As a whole they're quick reads with straightforward storylines, steamy interactions between the main couple, and exhilarating action in and out of the bedroom.  This latest installment is more of the same as lawyer Faith Robbins finds her life and heart in danger, while sexy biker Ethan "Legend" Packwood tries to claim her heart and mind at the same time he's trying to keep her safe from those seeking revenge.  In a story teeming with sexual tension, readers will be on the edge of their seats while waiting for everything to come to a head.
Faith Robbins grew up in the foster care system which taught her to guard her heart closely.  She grew up counting only on herself, never trusting that anyone is more than temporary, and never willing to believe that she's worthy of love.  These beliefs fuel the unending back and forth, hot and cold, connection between these two apparent opposites which left me often frustrated by Faith.  Legend constantly tried to show her how committed he was to her but she repeatedly pushed him away, though that didn't stop her from enjoying the decadent delights he offered her.  At the same time she repeatedly put herself in danger, despite Legend and his Club offering her their protection.  It made for a heroine full of internal conflicts, a heroine who wasn't my favorite but who brought out the best in the hero.  Legend has always been a player, flitting from one woman to another, except when it comes to Faith.  He's always been attracted to her, always wanted more than one night, but she's always pushed him away. Giving her some space, some time to think, doesn't help things either as her feelings are hurt and her doubts are further exacerbated.  It all leads to a relationship full of miscommunication, a connection full of second guesses, as well as banter that sizzles. There's a lot of unnecessary melodrama surrounding these two, a lot of issues (particularly coming from her) that could've been settled much sooner, if they had just talked it out.  The suspense surrounding Faith, the mystery of who's after her, was an exhilarating part of the story too and ends with a bit of a cliffhanger that has me ready to see what happens next.
Faith and Legend are a combustible couple forging a relationship full of her self-doubts and his need to protect those he claims as his.  While her constant back and forth was frustrating, I admired his never truly giving up on her.  Even when pushing him away, he was determined to keep her safe in a sexy and suspenseful journey to HEA.  Alongside this compelling main couple was a large cast of secondary characters, most who've been seen before, and some who are new additions to the MC.  It definitely has me excited for where Ms. James takes us next in a series that continues to entertain!
My rating for this is a B.
*I got this book from the author for review in exchange for my honest opinion. 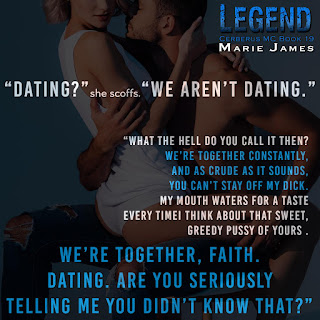 AUTHOR INFO:
Let's see...where to begin...
I'm inching up on the BIG 4-0. The gray hairs are doubling what seems like daily, and the wrinkles and laugh lines are more pronounced than ever.
I have an amazing husband (Married just over 15 years.)
We have two boys we're doing our best to raise as respectful gentlemen.
I have a master's degree in criminal justice which I used to work as a juvenile probation office until deciding to write full- time in June of 2019. So that means there's usually always some criminal/law element to my novels.
If I'm not writing; I'm reading.
My favorite genres recently are bully/reverse harem and enemies to lovers. Maybe I'm reliving my traumatic teen years through the girls who actually end up with the boys. (Not that I would change my history since it's gotten me exactly where I need to be!)
I love coffee. I miss carbs. Music is LIFE. I try not to be too serious.
FACEBOOK AUTHOR PAGE  |  TWITTER  |  BOOKBUB  |  INSTAGRAM  |  AMAZON AUTHOR PAGE  |  GOODREADS AUTHOR PAGE  |  NEWSLETTER  |  WEBSITE
at January 06, 2022